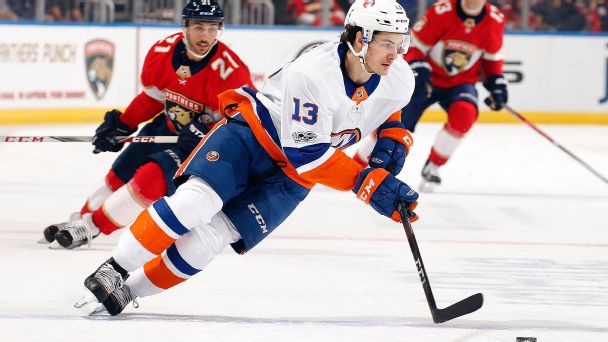 At the start of each month, we check in on the major awards races in the NHL. These picks are based on current achievements and probability of voter support as the season progresses.

As you'll see, there are some clear leaders at this point for a few of the awards, but it's a rather crowded field for most of them. Please keep in mind that all advanced stats are via Corsica, and that our usual hard-and-fast rule about weighing the candidacy of playoff-bound players more heavily for awards like the Hart Trophy doesn't apply here.

Please put your agreements, disagreements and alternative candidates in the comments.

And now, the nominees are:

The number of candidates for the Hart Trophy at this point in the season is staggering. There are 28 players with a points-per-game average of better than 1.00, including the three listed here.

Why Kucherov? Because if the Lightning remain on a President's Trophy pace, the Hart likely goes to either him or linemate Stamkos. As of this writing, Kucherov has the advantage over Stamkos in goals and is one point behind him -- and no disrespect to Stamkos, but this is an "either/or" race for MVP.

If the Capitals make the playoffs on the back of a 59-goal season from Ovechkin -- and that's his current trajectory -- then he'll grab some votes. Gaudreau and Sean Monahan have similar metrics for the Flames, but Johnny Hockey is eight points better than the second-leading scorer for Calgary, a bubble team.

Let's start with the obvious: Now that he's played a bunch of games after injury rehab, Karlsson remains in a class by himself. He's the best player on a mediocre team, which at this point should be his official title. Put it this way: He went scoreless for 10 games and is still third among defensemen in points per game (0.80). He's also fourth in the league in relative Corsi percentage, at 8.09 through 21 games. The slump is of some concern, but let's apply the Nicklas Lidstrom Rule here, wherein a B-plus, great Lidstrom season remains substantially better than an A-plus season from another defenseman.

The tricky part about the Norris is that familiarity usually rules the day. Josi and Doughty have been great, but they're also annual candidates for voters in a way that other worthy players --John Carlson of the Capitals, Nick Leddy of the Islanders and Zach Werenski of the Columbus Blue Jackets-- aren't. That could change if, say, Leddy wrestled the scoring lead from John Klingberg of the Dallas Stars. But let's face it, they're both waiting for Karlsson to rally for it.

As for Alex Pietrangelo of the Blues, preordained Norris winner by the Canadian media and our leader last month? He's right in the mix, even if his relative expected goals (minus-4.59) and relative Corsi (minus-0.78) are a tick below where you'd want them to be.

Officer Bob is 14-7-1 and leading all goalies in in even-strength save percentage (.930) and in goals-against average (2.10). But the nod here goes to Vasilevskiy. He has faced more shots than Bobrovsky, and has a better low-danger shot save percentage (.985), while putting up stellar numbers overall (18-4-1, .930 save percentage). But it's a tight race between two guys we wish were pushing each other on the Russian Olympic team this season. Alas, there's no NHL in the 2018 Winter Games. Or Russia, for that matter.

Crawford (11-7-2, .930 save percentage, .987 save percentage on low-danger chances) remains the best thing about a diminished Blackhawks team, although he's out with an injury at the moment. He's just ahead of Braden Holtby of the Capitals, Cory Schneider of the Devils, Jonathan Quick of the Kings, Connor Hellebuyck of the Jets and a fast-approaching Frederik Andersen of the Maple Leafs. A crowded race, far from over.

The best recipe for a rookie of the year: Lead the league in either goals or points, and dazzle the voters with highlight-reel plays. Needless to say, Barzal has done both, with 27 points in his first 28 games and some effortless mastery in creating goals with linemate Jordan Eberle. He's the clear leader for the Calder, but Boeser's on his heels for the scoring lead. Clayton Keller of the Coyotes has cooled off, while first overall pick Hischier is trending up as the Devils refuse to fade. Alex DeBrincat of the Blackhawks is right there, too. Tough sledding for a great crop of young defensemen --Mikhail Sergachev, Will Butcher and Charlie McAvoy-- as the forwards grab the spotlight.