Now what for the Giants? Potential replacements at coach and GM 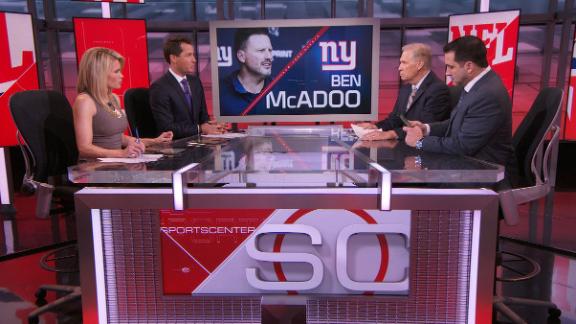 The New York Giants became the first NFL team to hit the reset button during the 2017 season Monday when they fired general manager Jerry Reese and head coach Ben McAdoo.

The early move gives the Giants additional time to line up candidates for both jobs. Ownership has enlisted former GM Ernie Accorsi as a consultant while assistant GM Kevin Abrams fills in for Reese and defensive coordinator Steve Spagnuolo fills in for McAdoo (both Abrams and Spagnuolo are candidates to shed their current interim designations).

The search could take them in multiple directions. Some of the possibilities I discussed with executives Monday were downright fascinating.

The Giants' next leaders will have work to do.

Finding Eli Manning's successor at quarterback and upgrading the offensive line/rushing attack will be top priorities for the Giants' next decision-makers. The team currently is in line to pick second in the 2018 NFL draft behind Cleveland, which could take a quarterback, and just ahead of San Francisco, which could already have one in Jimmy Garoppolo.

"The Giants have a QB already and a top-five pick to get their next one," a longtime team exec said Monday. "They are with Pittsburgh and Green Bay and those teams that give people a chance to win. They have the tradition of winning. I don't think you can find a place any better."

Among the more interesting possibilities that came up in discussions:

As the ice beneath Reese and McAdoo grew thinner over the weekend, I asked a few league insiders for predictions. The first two responded by suggesting the Giants could pursue Nick Caserio and Josh McDaniels from the Patriots. Both are in an ideal situation and probably can be more selective than other candidates.

"I think they go somewhere together this year," the exec said. "If you are true to yourself and not just looking for the most money or power, the Giants might be the best spot."

Caserio, now finishing his 17th season with New England in both coaching and personnel capacities, would come in as GM. McDaniels would be a head coach for the second time, hopefully having learned from his unsuccessful first opportunity with Denver years ago.

Dave Gettleman was the Giants' pro personnel director from 1999-2011 and a senior pro personnel analyst for the team in 2012 before becoming the Carolina Panthers' GM. The Panthers posted a 48-27-1 record and reached a Super Bowl during Gettleman's tenure before team owner Jerry Richardson fired him in July.

"I think Gettleman winds up there as GM," another exec predicted.

Do the Giants want to gut their entire personnel operation? If they do, bringing back Gettleman might not make sense. He would presumably keep some of the scouting infrastructure that was there during his extended tenure with the team. But with Accorsi involved in the search process, Gettleman would seem to be a strong fit. The two worked together with the Giants from 1999 to 2007, with Accorsi serving as Gettleman's boss.

"That is a possibility because he is family," another exec said.

Gettleman inherited coach Ron Rivera in Carolina and never made his own hire. His ties to Carolina could make coordinators Mike Shula and Steve Wilks persons of interest during a coaching search, but as one of the execs who respects Gettleman pointed out, good GMs extend their searches beyond the people they know.

"Gettleman is too good to just go out and hire a guy he knows as head coach," this exec said. "He would look everywhere."

Bring in Bill Polian as a Coughlin-style czar type

While the Giants have imploded this season, their former coach, Tom Coughlin, is riding high as the top football executive for the 8-4 Jacksonville Jaguars.

"This is such a copycat league and I think Coughlin having success with Jacksonville begs a question," one exec said. "Do you bring in a Polian to be your guy in charge of everything and just let him hire everybody? It is fascinating. He would probably have the push from the league saying it would be a good idea."

Polian is working for ESPN as an analyst. A Pro Football Hall of Famer, the six-time NFL executive of the year was still under consideration for the Hall in 2015 when he turned down an opportunity to join the Buffalo Bills in an advisory role. He turns 75 later this week. That doesn't necessarily make him too old. Coughlin is 71 and has obviously had a positive impact.

Stick with Abrams: The Giants promoted Abrams into Reese's role and could stick with him if they weren't looking for a bigger shake-up. Abrams has been with the team for 16 seasons, including a stint as the team's salary-cap analyst and contract negotiator. The Detroit Lions reportedly made contact with him before hiring Bob Quinn as GM in 2015.

Consider familiar GM names: The Giants could consider some of the GM candidates who have interviewed around the league in recent years.

There are too many to recount at once. I've surely left off a few good ones. (Update: I've already been reminded of one -- Joe Douglas, who is prominent with the Eagles.)

Give an ex-GM a chance: Coaches get recycled more frequently than GMs do, a source of frustration for personnel evaluators who think they'd do better the second time around. Massive amounts of football horsepower can go underutilized while teams seek fresh-faced candidates.

The Giants have been known to admire New Orleans Saints coach Sean Payton, a former Giants assistant. Payton's future in New Orleans has sometimes appeared tenuous, but with the Saints contending in the NFC, it's difficult to see him becoming available.

Texans defensive coordinator and former Patriots player Mike Vrabel is another candidate to watch. His name comes up increasingly regarding job openings.