Officials: Late non-call in Thunder-Spurs should have been offensive foul 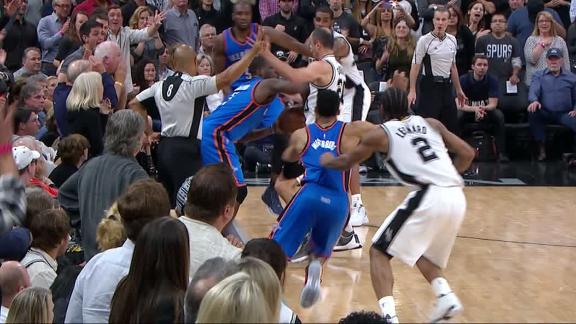 SAN ANTONIO -- Officials said after the Oklahoma City Thunder's 98-97 win over the San Antonio Spurs on Monday night that they should have called an offensive foul during a controversial late-game sequence.

The sequence in question involved Oklahoma City's Dion Waiters on an inbounds play with 13.5 seconds remaining and his team nursing a one-point advantage. Replays showed Waiters used an elbow on Spurs guard Manu Ginobili to clear the space he needed to pass the ball to Kevin Durant, who was subsequently stripped by Danny Green.

Had an offensive foul been called on Waiters, possession would have been given to the Spurs, Mauer said.

Oklahoma City's victory evened the best-of-seven series at one win apiece, and the wild late sequence led Spurs coach Gregg Popovich to walk off the court at the conclusion of the contest while screaming at game officials.

"Something certainly happened on the sideline, I thought," Popovich said.

"Did you see it?" he said. "I was trying to pressure the ball, and he kind of created room with his elbow. It's a very awkward play. It doesn't happen very often. So I guess they didn't see it. With all that, we complain about that, but what can we do? We had the ball. We had a great shot. We had a few other opportunities. So things happened."

Popovich complained to officials after the game. Asked whether it will mean anything when the NBA calls to inform him the refs made a mistake on the call, Popovich said, "No, it won't mean anything if they do that. The game's over."

NBA officials release a last-two-minutes report to critique referees' calls for all games that are within five points at the two-minute mark of regulation or overtime. LeBron James of the Cleveland Cavaliers and Dwyane Wade of the Miami Heat spoke out against the practice last week.

Ginobili shared similar thoughts to Popovich's and said, before the officials' announcement, that he wasn't sure whether the play in question constituted an offensive foul.

"I don't know what it is, to tell you the truth, what type of a violation it is," Ginobili said. "It's got to be something. But again, it's not that play that decided anything because we got the steal, we got a shot, we got an offensive rebound. I really don't know. I've never seen a play like that. I don't know what should have been called or if it should have been called anything. It doesn't matter. It's over. We're not gonna be able to change it. Nobody's gonna change it. It's 1-1. We've got to go to OKC and try to win a game."

Others around the NBA were adamant that the original non-call was wrong.

Waiters said he was too "caught up in the game" to notice whether a violation occurred.

"I really don't know what happened, to be honest," he said.

While replays showed Waiters using his elbow to clear space, they also appeared to show Ginobili's foot on the line. It was unclear whether that should have been enough to trigger a delay call or whether Ginobili would have had to fully cross the line. The NBA rulebook states: "A delay-of-game shall be called for ... A defender crossing the boundary line prior to the ball being released on a throw-in."

"Hopefully, they're going to look at it and see he stepped out," Waiters said. "Should have been a tech, too. When they look at it, they'll see the truth. We played on. They got the ball back. We got a hell of a stop."

"A bunch of scrambling," he said of the final seconds of the game. "I thought I had the ball. I thought [Serge Ibaka] had a good chunk of my jersey. I thought there were some things happening that maybe shouldn't have happened. But it's over now. You can't keep harping on it."

Amid the wild ending, Thunder center Steven Adams tumbled into the seats along the baseline with about four seconds remaining. As he struggled to get up and get back on the court, a fan could be seen clutching his right arm. Adams angrily shook off the fan's grasp. He was unavailable for comment on the incident.

Popovich: No explanation from refs after game
Spurs coach Gregg Popovich says he feels his team could've lost the game "three times" but hung in until the end and won't take solace in the NBA potentially admitting a mistake in the non-call at the end of the game