One game away from elimination, Rangers' veterans being counted on to respond against Senators 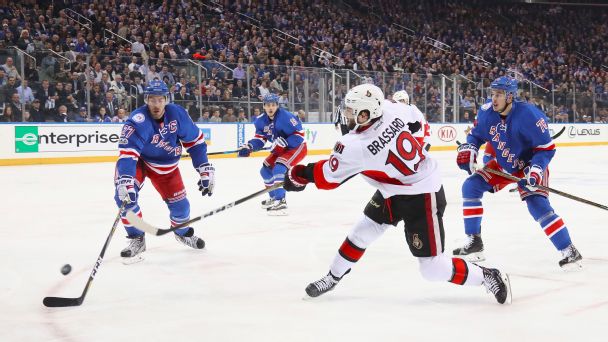 NEW YORK -- The New York Rangers will be facing elimination Tuesday night, but coach Alain Vigneault is viewing Game 6 at home against the Ottawa Senators as something different.

"This is going to be an opportunity for our team to respond and to play a strong game in a pressure situation," Vigneault said Sunday afternoon on a conference call with reporters. "It's normal at this [time of] year to be nervous; there's no doubt our guys are nervous, but you've got to control your emotions and you've got to focus on what you need to do on the ice."

What the Rangers really need to do is win a game in Ottawa, but to get that opportunity they'll have to hold serve in New York. They had a great chance to take Game 5 at the Canadian Tire Centre on Saturday, but squandered a 4-3 lead with less than two minutes left in regulation and lost 5-4 in overtime.

"You've got to give them credit; [the Senators] played a good game, there's no doubt," Vigneault said. "For us, it's about executing and playing to our level. [There's] no doubt in my mind yesterday that our players came with the best intentions, but we had too many guys that just brought an average game."

The Rangers have had three close calls in Ottawa so far, losing 2-1 in Game 1 and 6-5 in double overtime in Game 2. New York had a 5-3 lead with less than four minutes remaining in Game 2.

"We haven't won in Ottawa yet, but in my mind we took two games to overtime and played some pretty good hockey in spurts," Vigneault said. "So we've got to focus right now on the next game and what we need to do right."

The Rangers and Senators will both practice in New York on Monday, and play Game 6 at Madison Square Garden on Tuesday night.

If the series goes the distance, Game 7 would be back in Ottawa Thursday night.

The Senators should like their chances. In Stanley Cup playoff history, in a series that is tied 2-2, the team that's won Game 5 has gone 196-54, winning 78.4 percent of those series (according to the Elias Sports Bureau).

The Rangers, with their backs against the wall, will be relying on their veterans, who have accumulated a whole lot of playoff experience in recent years. Henrik Lundqvist is the active leader among goaltenders in both playoff appearances (127) and wins (61). Defensemen Dan Girardi (121) and Marc Staal (103) have both played in more than 100 postseason games, and center Derek Stepan (96) and defenseman Ryan McDonagh (95) in nearly 100.

"There is a lot of experience, and they have to use this experience right," Vigneault said, referring to his veteran players. "First of all, to get themselves ready, to go out on the ice and execute and play hard and play well. And if they do that, then it's definitely, in my mind, going to rub off on the rest of our group."
Related topics:
sportsespnplayoff battlenew york rangershenrik lundqvistplayoff spotottawa senators2017 stanley cup playoffsalain vigneaultstanley cup playoffsnhlerik karlssongame 6eastern conferencesecond round
Copyright © 2020 ESPN Internet Ventures. All rights reserved.
More Videos
From CNN Newsource affiliates
TOP STORIES