Panthers LB Luke Kuechly in concussion protocol after being carted off 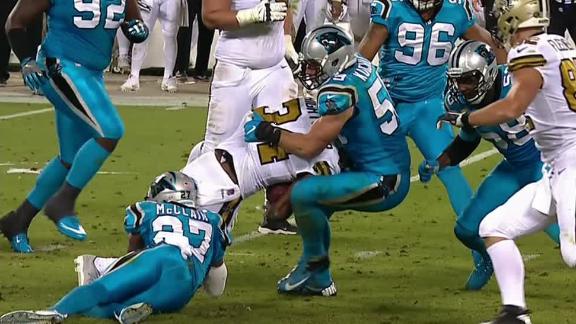 After expressing his worry over Kuechly's injury, Rivera quickly added, "I don't want to get into the speculation of all of that. I'm not the expert."

Kuechly was placed in the concussion protocol after he was carted off the field late in the fourth quarter Thursday night of a23-20 winover the New Orleans Saints. He appeared to take a helmet-to-helmet hit on a tackle of Saints running backTim Hightower.

He was in tears as he rode off toward the locker room Thursday night while fans screamed "Luuuuke!''

The picture of Kuechly in tears left an impression on many who saw it, including Carolina players.

Rivera would not speculate on how much time Kuechly might miss. The 2013 NFL Defensive Player of the Year missed three games last season with a concussion suffered in the opener at Jacksonville.

Kuechly appeared in much better spirits Friday. Outside linebacker Thomas Davis posted a picture of himself with Kuechly holding his thumb up.

Kuechly is the sixth Panthers player to be diagnosed with a concussion during the regular season and the seventh since the preseason. That leads the NFL, with the New York Giants and Washington Redskins tied with five each.

Saints quarterback Drew Brees had a message for Kuechly as he left the field Thursday.

"I tried to let him know that I was going to be praying for him," Brees said. "He is ... certainly one of the best football players I've ever seen and played against. And I hope that he's OK."

The Panthers will have 10 days before their next game. It's rare for a player to be cleared from the protocol in seven or fewer days, and because Kuechly previously has suffered a concussion, it could make his recovery longer.

After the game, Carolina players obviously were affected by the injury to Kuechly as well as to center Ryan Kalil (shoulder) and defensive end Mario Addison (foot). There was no celebrating in the locker room.

"We rally behind that guy,'' Panthers defensive end Charles Johnson said about Kuechly. "He's our leader. When you see a leader go down like that, we just rally behind him. I'm keeping Luke in my prayers.''

Tight end Greg Olsen said the only good thing that came out of the game was the win. He said it was tough seeing the look on Kuechly's face as he was carted off the field.

Safety Kurt Coleman was one of several players who mentioned he was praying for Kuechly.

"It looked like the same exact thing that happened in Jacksonville last year," Coleman said. "He was yelling to us to continue to fight. It's remarkable in a sense.

"Just hoping it's precautionary and he will be back sooner rather than later. That's all I can hope for."

Players on offense were impacted as well.

"That's our leader, one of the key components of our team,'' fullback Mike Tolbert said. "It's more than that. He's a brother of ours, so when we see him down, a guy that's as tough as he is and as mighty and strong spirited as he is, to see him in that predicament, it really hits home.''

The Panthers already were without outside linebacker A.J. Klein, who suffered a concussion last week.

Kuechly was one of several key players injured Thursday night, along with Kaliland Saints running back Mark Ingram (possible concussion) in the third quarter.

Kalil had missed two straight games with an injury to his right shoulder. It wasn't immediately clear which shoulder was injured Thursday.

Ingram was injured on a 13-yard run when he collided with Colemanas he went down. Ingram lay on the ground for a few seconds before getting up and walking off slowly. Later, he headed to the locker room to be evaluated for a possible concussion.

Information from ESPN staff writer Mike Triplett and The Associated Press was used in this report.

Kuechly carted off after taking a tough hit
While trying to make a tackle, Panthers linebacker Luke Kuechly goes down hard and is carted off in the fourth quarter. He would not return to the game.