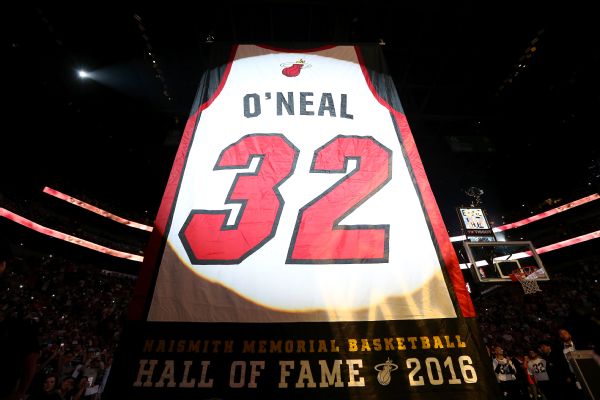 MIAMI -- On the July 2004 day when he was introduced in Miami, Shaquille O'Neal arrived in an 18-wheeler with "Diesel Power" written on the side and thousands of screaming fans greeting him.

The whole spectacle reminded O'Neal of championship parades in Los Angeles, where he had won titles with the Lakers in 2000, 2001 and 2002. Standing there, O'Neal decided to tell the fans in Miami, "I want y'all to remember this feeling right here. I'm going to bring a championship to Miami. I promise."

In 2006, O'Neal delivered on that promise, bringing the Heattheir first NBA title and helping raise the profile of a franchise that would later win two more with LeBron James. On Thursday night at AmericanAirlines Arena, the Heat retired O'Neal's No. 32 jersey, raising it to the rafters, where it will hang alongside fellow Hall of Fame center Alonzo Mourning's No. 33 and guard Tim Hardaway's No. 10.

During a halftime ceremony while the Heat faced the team (the Lakers) that traded O'Neal to Miami, the jubilant 7-foot-1 center stood behind a lectern in a blue and red suit and thanked family members, former teammates, members of the organization and fans.

And he told plenty of stories.

He recalled knowing that he would be traded from the Lakers, where he clashed with star Kobe Bryant, and then watching young Heat starDwyane Wadein a game against Charlotte.

Heat president Pat Riley remembered calling the team's owner and saying they had a chance at acquiring a "once-in-a-lifetime player" who was strong, fast and agile, could score, run, dunk and laugh, was charismatic and a global icon -- and who wears a size-22 sneaker.

Micky Arison asked whether Riley was serious about the Heat getting O'Neal; Riley said he was and recalled how Arison began screaming with joy.

While O'Neal said he was on the "downslide of his career," Riley noted that the team wouldn't have won the title without him and that the star center "changed our franchise."

As part of Thursday's ceremony, the Heat made a $50,000 donation to O'Neal's charity, Odessa Chambliss Quality of Life Fund; presented him with a framed replica jersey banner; and greeted him on the court with a smaller replica of the "Diesel Power" 18-wheeler that first delivered him to Heat fans in 2004.

O'Neal called the 2005-06 team a "bunch of misfits" and remembered how he asked Riley to move practices from 10 a.m. to noon because "those guys used to go out every night on the beach."

He reminisced about being "very scared" when the Heat fell down 0-2 to the Dallas Mavericks in the Finals before winning the next four games.

O'Neal ranked the 2006 title as his second-favorite, behind the 2000 title -- his first championship -- that he won with the Lakers alongside Bryant.

"This one was also special because, for one, everyone thought we couldn't do it, and second of all, I didn't really have a Shaq-like Finals and D-Wade just stepped up," O'Neal said.

Wade averaged 34.7 points, 7.8 rebounds, 3.8 assists and 2.7 steals and was named Finals MVP. Earlier Thursday, he saluted O'Neal for their time together.

Riley called O'Neal "the leader" of that 2005-06 team and said that, despite all of his joking and pranks, "he was very serious about winning."

Looking back, Riley said he was still surprised the Heat were able to acquire O'Neal.

"They had won three [championships] in Los Angeles, and you just think they are going to keep that together and run its course like the Lakers did the first time with Kareem [Abdul-Jabbar] and Magic [Johnson]," Riley said.

O'Neal averaged 19.6 points and 9.1 rebounds over nearly four seasons with Miami before being traded to Phoenix in 2008.

"Those were some of the best years in my NBA career," O'Neal said of his Heat tenure.

When Riley coached, he always wore one of his championship rings, and before games, O'Neal would rub it, Riley recalled.

"Coach, we are going to get one of those," O'Neal would tell him.

"He delivered on that promise," Riley said.