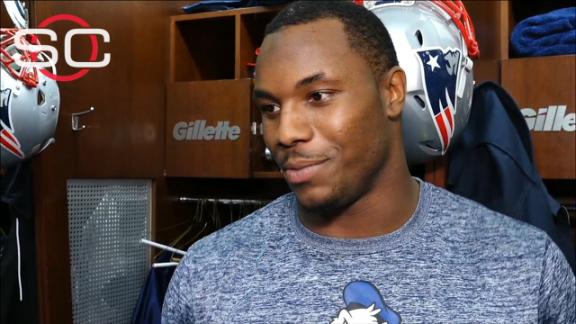 FOXBOROUGH, Mass. -- New England Patriots reserve linebacker Darius Fleming played in Saturday's divisional-round win over the Kansas City Chiefs with 22 stitches in his right leg, saying it was a result of rescuing a woman from a smoking car a mile away from Gillette Stadium two days earlier.

Fleming, a fourth-year player out of Notre Dame, drew a large media crowd in the locker room Wednesday as word of his story became public through the Facebook page of his high school.

The 26-year-old Fleming said a large truck made an unexpected right turn on Route 1 while he was driving away from Gillette Stadium, which he said led to three cars colliding in front of his vehicle.

The Walpole police said Wednesday that there was a three-car incident Thursday afternoon and that two of the cars had be towed from the scene but there were no injuries reported.

"I was about to go around it, but I noticed the lady in front of me, she kind of was jumping around the car, passenger seat, back seat, and I noticed smoke building up inside the car," Fleming recalled. "I tried to open the doors and it wouldn't work. So then I was just like, 'I have to get her out of here. I don't know if this lady can breathe or what.'

"I started banging on the window. It wouldn't break. So then I started to kick in the window and eventually it broke."

The Walpole police said that "there was no fire involved in this crash however there was air bag deployment, which to the untrained eye can appear as if the vehicle is enveloped in smoke."

One of the officers at the scene indicated that one of the cars had a broken window and "the operator of that vehicle did make statements to one officer that a male party 'kicked in my window, I think he was a Patriot.' This was not entered into the report as this was a standard motor vehicle crash report with no injury.

"On arrival the individual in question was not on scene and due to the nature of the accident there was no follow up to this information as the identity to an unknown good Samaritan had no bearing on this report. We are attempting to obtain more information at this time and will follow up with another release should we learn more," the Walpole police said in the statement.

In a later statement, the Walpole police said the woman in the car in question, who wishes to remain anonymous, returned their call at 4:50 p.m. ET to give more detail on the incident.

Fleming was added to the Patriots' injury report Wednesday as a limited practice participant due to back and shin injuries.

Fleming said it took three kicks of the window before it broke. After ensuring the passenger was OK, Fleming said he returned to the stadium for a bandage before going to the hospital for X-rays and 22 stitches.

On the field, Fleming's primary contributions to the Patriots come on special teams, where he played 16 snaps between the punt coverage, kickoff coverage, kickoff return and punt return units and registered one tackle. He also came on for 10 defensive snaps late in the game when linebackers Jamie Collins (back) and Jerod Mayo (shoulder) left with injuries, and added a tackle on defense.

Fleming said the stitches didn't affect him during the game, although his initial thought was that he might be unavailable for the game.

"I was just excited to be able to play. The first thing that came to mind was, 'Damn, my leg is cut up pretty bad,' so I wasn't sure how that would affect me, how it would affect my game," he said, before adding: "I was fine."

Once teammates heard Fleming's account of his actions, safety Devin McCourty said they had him give a speech to the team.

"Guys were like, 'Why didn't you grab a brick?'" Fleming said. "[But] the smoke inside the car started to freak me out, so I can't be like, 'Lady, I'll be right back.' I was kind of like 'get her out of here right now.' That's just what came to my mind."

Fleming's story is similar to what unfolded with defensive linemanVince Wilforkin January 2015 when he rescued a trapped motorist on Route.1.

Also, prior to the 2006 season, Patriots coach Bill Belichick was returning from his son's lacrosse game in Greenwich, Connecticut, when he saw a BMW upside down in a ditch in the woods to the right side of the highway.

He pulled over and, along with a family from Cranston, Rhode Island, assisted the victims -- including holding a towel of ice to the driver's head -- until police and rescue workers arrived. At the time, Belichick told the Providence Journal that it was the most serious looking accident he'd ever seen.