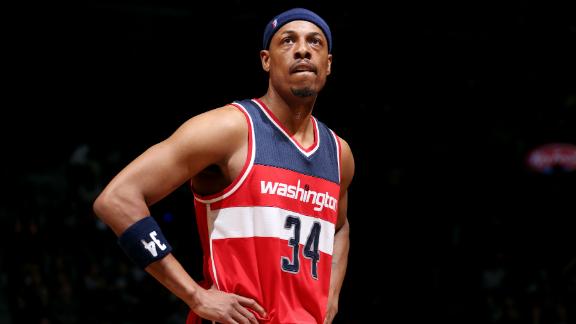 Ex-Brooklyn Nets forward Paul Pierce blasted his former team in an interview with ESPN.com's Jackie MacMullan, calling his one year with the franchise "horrible."

"It was just the guys' attitudes there. It wasn't like we were surrounded by a bunch of young guys. They were vets who didn't want to play and didn't want to practice. I was looking around saying, 'What's this?'Kevin [Garnett] and I had to pick them up every day in practice," Pierce told MacMullan.


"Before I got there, I looked at Deron as an MVP candidate,'' Pierce said. "But I felt once we got there, that's not what he wanted to be. He just didn't want that.

"I think a lot of the pressure got to him sometimes. This was his first time in the national spotlight. The media in Utah is not the same as the media in New York, so that can wear on some people. I think it really affected him.''


Pierce and Garnett tried pushing different buttons with Williams, which included Pierce challenging Williams before the Nets turned their season around in 2014, sources told ESPN.com.


Williams responded by scoring 29 points in 41 minutes in Oklahoma City, dominating in the fourth quarter. Brooklyn won the game at the buzzer and went on to go 34-17 the rest of the way.


Said Pierce of Joe Johnson: "Joe is quiet. He doesn't want much attention. He doesn't say much.


"There's a lot of secondary guys on that team. KG and I went there looking at them as the main guys who would push us, because we were advancing in years. But we ended up doing all the pushing.''