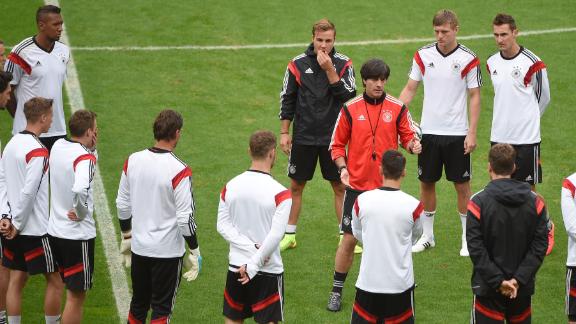 Muslim footballers including Mesut Ozil, Xherdan Shaqiri, Granit Xhaka and Valon Behrami will not observe Ramadan due to their participation in the 2014 World Cup.

The issue is also being given consideration by members of Algeria's squad, the last Muslim country in the competition, ahead of their round of 16 game against Germany on Monday, while there are also Muslim players in the squads of France and Nigeria.

Ramadan, a month of fasting from dawn until sunset, began on Sunday and is obligatory for all Muslims. However, exceptions are made for those who are travelling, pregnant or suffering from an illness.

At a prematch news conference on Sunday, Algeria's Bosnian coach Vahid Halilhodzic reacted angrily when asked about the situation.

He said: "This is a private matter and when you ask this you lack respect and ethics. The players will do as they wish and I would like to stop this controversy.

"Ramadan is here and I read in some Algerian newspapers criticisms about me, about my image, about my honour.

"They are trying to raise hatred against Vahid, against my family, and this is really disgusting.

"It is not the first time I have Muslim players in my team, I myself am a Muslim, and I've always left them totally free. This is a private issue -- it has to do with private freedom of expression.

"Stop asking me about Ramadan, otherwise I will get up and leave."

Algeria midfielder Nabil Bentaleb also explained that the national team "will not talk about" whether they observe Ramadan or not. "I make a personal decision, but will not make it public," he added in quotes reported by kicker.

Algeria captain Madjid Bougherra added: "I will hinge that on my physical state, but I think I'll do it."

Ozil, the only practicing Muslim in Joachim Low's Germany squad, has already said that he will not observe Ramadan.

"I can't do it because of my job here, and I'd like to think the Algerians will do it just like me," he told kicker. "We would risk our health by not drinking or eating. And that would also not be consistent with the Quran."

Ozil has been backed by the Central Council of Muslims in Germany, who reached an agreement with the German FA in 2010. The Central Council had asked for an expert opinion by the Islamic Al-Azhar academy in Cairo, which came to the conclusion that fast-breaking is allowed for professional footballers.

Switzerland's Muslim players like Shaqiri, Xhaka and Behrami have also announced that they will not observe Ramadan.

Behrami told kicker: "It would not be good timing. To eat and drink is important in this climate."