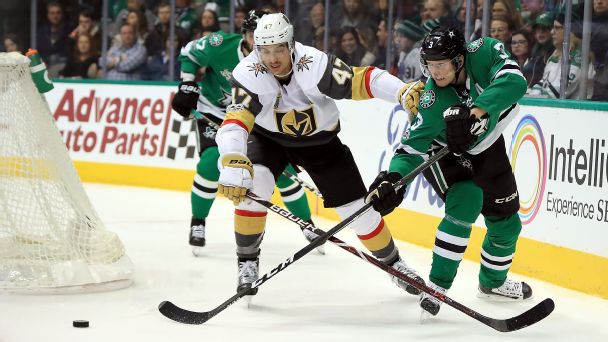 How many of the teams that are in playoff position nowbut didn't make it last season will be there by season's end?

Greg Wyshynski: The Tampa Bay Lightning, Los Angeles Kings, New York Islanders and Winnipeg Jets are locks. Yes, the Jets are a lock: There's just way too much scoring (3.41 goals per game) ahead of stabilized goaltending for the bottom to fall out in Winnipeg. And, yes, this might be a wish my heart is making about getting playoff games in front of the fanatical fans of Winnipeg,

This leaves us with the Vegas Golden Knights, New Jersey Devils and Dallas Stars. Of the three, Dallas has the best puck-possession numbers, ranking No. 9 overall in Corsi percentage. The Knights are No. 13 and the Devils are No. 28. So, based on that, one assumes Dallas has the edge.

The Knights ... good luck figuring that out. They keep inexplicably winning. The odds are good they'll make the playoffs. But would anyone be shocked if they didn't?

Here's the thing: Overall, the Western Conference feels more competitive than the East, especially around the playoff bubble. The Minnesota Wild and Chicago Blackhawks are within striking distance. And the Anaheim Ducksare ready to make their charge when they're healthy.

But in the Eastern Conference, New Jersey might have less competition on the bubble, should it end up there. The Devils are fast, they're talented and they have a solid goaltender. They're turning a lot of people into believers.

Emily Kaplan: The Lightning are going to run away with the anemic Atlantic Division. The Kings are my second lock. The Pacific is up for the taking, thanks to the Ducks' rash of injuries and the Edmonton Oilers' free fall. If the Kings play like they did to begin the season, or during their current eight-game winning streak (3.75 goals per game, a remarkable plus-17 goal differential), they're a threat to make a run in the West. And because of the aforementioned cluster in the division, I'm penning the Golden Knights in, too. Don't fight it; they just keep winning. I've been on the record of having a huge hockey crush on the Jets this season, so I'm with Greg; they've shown enough to prove they're in.

Here's where I'm going to veer off. I'm not totally buying into the Islanders yet (though the mounting evidence in the form of ridiculousMathew Barzalhighlights, and Anders Lee and John Tavares goal totals, makes me want to say otherwise.) The Metropolitan Division is too muddled -- six teams are within five points -- to draw any conclusions. The Devils and Islanders have both been pleasant overachievers two months in, but how can we trust either of these teams with the veteranPittsburgh Penguins and New York Rangerslurking behind within two points? I'm especially wary of the Devils because of their youth and troublesome possession numbers.

The Stars? I wrote last week that they might have turned a corner -- the players told me it just took a little longer than expected to adjust to coach Ken Hitchcock's new system and demands of them. I want to believe in Dallas, but it is currently tied in points with the Blackhawks and Wild, and I have a feeling that one -- if not both -- of those teams can unseat the Stars.

Chris Peters: Let's start with the easy part. Tampa Bay is a lock, with Los Angeles and Winnipeg not far behind. Tampa is going to run away with the Atlantic, recovering from last year's injury-plagued disaster to become the darlings of the league once again. The Kings have been streaky, but in an unpredictable Pacific Division, they seem to be on the most solid footing of anybody. Meanwhile, the Jets seem to have too much scoring talent to fall out. I think the same is true of the Islanders, though they haven't had the goaltending to make them a more comfortably-projected playoff team.

After that it gets trickier. Right now, only four points separate the top six teams in the Metropolitan Division. It's still anybody's division and all six are going to jockey for five playoff spots. The fact that the Penguins are the team on the outside looking in will leave none of the five ahead of them feeling comfortable. Based on what we've seen so far this season, as fun as they have been, I think we might see the Devils fall out. Their possession numbers are enough of a concern that they aren't leaving much margin for error. I really like the way they play otherwise, but I feel like they're still a year or two away.

Over in the West, I'm still not totally sold on the Stars. I think their top players can carry them a long way, but I'm less certain it's all the way to the playoffs. Dallas' goaltending hasn't been amazing, but serviceable. I'm just not sure the Stars have the scoring depth to push them over the hump. As Greg already noted, the Western Conference is going to be competitive for the last few spots. I've somehow talked myself into the Golden Knights making it -- barring a pre-deadline fire sale to continue collecting assets for the future.
Report a correction or typo
Related topics:
sportsespncontenderspostseasonnew jersey devilsstanley cup playoffsplayoff picturelos angeles kingsvegas golden knightsnew york islandersnhldallas starseastern conferencewinnipeg jetswestern conference
Copyright © 2020 ESPN Internet Ventures. All rights reserved.
More Videos
From CNN Newsource affiliates
TOP STORIES