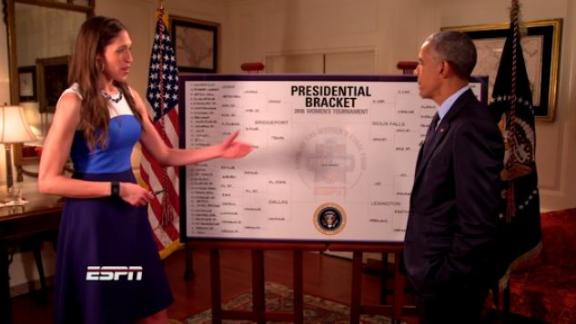 While President Barack Obama's second term is coming to an end, he sees the reign of Geno Auriemma and the top-ranked Connecticut Huskies continuing for a fourth straight term as NCAA women's basketball champions.

The president, making his annual picks for ESPN, is choosing UConn to beat Notre Dame on April 5 in Indianapolis. It's the fifth time in seven years that Obama is selecting the Huskies. He correctly picked them in 2015, 2014 and 2010, and his selection of the Huskies in 2011 was wrong as Texas A&M won the national title.

He'll discuss his selections in detail on SportsCenter on Thursday morning. Obama picked Kansas to win the NCAA men's basketball championship on Wednesday.

UConn also won the title in 2013 as Obama incorrectly picked Baylor to defend its crown, which he predicted in 2012.

While President Obama also selected South Carolina as his third No. 1 seed to reach this year's Final Four, he does have a surprise pick to reach Indianapolis -- the fifth-seeded Florida State Seminoles.

In fact, he has fireworks happening all over the Dallas Region.

After picking the Seminoles to knock off host Texas A&M in the first round, Obama likes FSU to go into Dallas and beat the top-seeded Baylor Bears. He then has FSU beating third-seeded Louisville, which he predicts to topple second-seeded Oregon State in the Sweet 16.

Other picks of note: