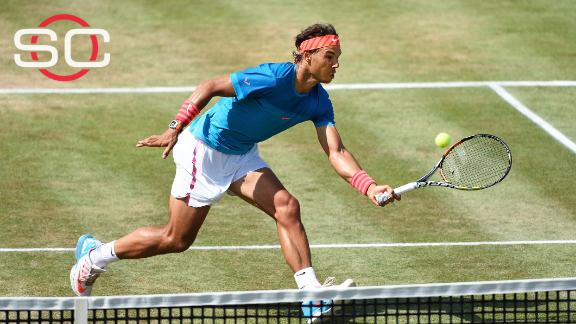 STUTTGART, Germany -- Rafael Nadal defeated Viktor Troicki 7-6 (3), 6-3 Sunday to win the Mercedes Cup for the third time and claim his first title on grass since Wimbledon in 2010.

The top-seeded Spaniard, who had no aces in his semifinal win over Gael Monfils, ended the first set tiebreaker with an ace -- his ninth. Nadal saved the only break point he faced.

Playing with evident confidence against the eighth-seeded Troicki, Nadal converted his first opportunity to go 3-1 up in the second set and he served out the win in 1 hour, 27 minutes.

"I'm really, really happy. It's my second win this year and it gives me a lot of confidence," said Nadal, after his 66th career title and fourth on grass.

Nadal was made to work hard against Bernard Tomic and Marcos Baghdatis in the early rounds but improved as the tournament progressed and looks to be in good shape for Wimbledon.

"It was a great week for me," Nadal said.

The 14-time Grand Slam winner maintained his unbeaten record against Troicki with his fifth win over the 28th-ranked Serb.

Nadal previously won the tournament in 2005 and 2007 when it was still on clay. It made the switch to grass as a Wimbledon tune-up this year.