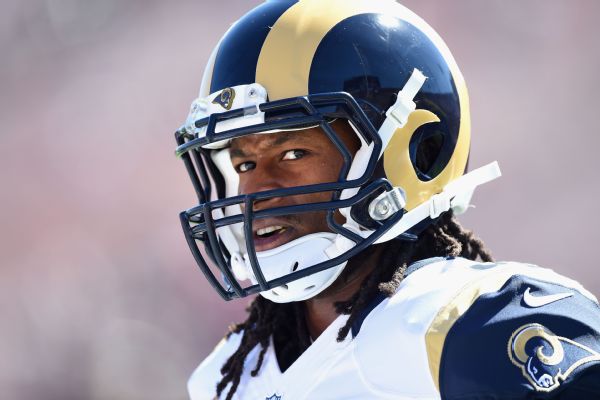 LOS ANGELES --Todd Gurley said his Rams were running what "looked like a middle school offense" and questioned the effort of his teammates after Sunday's 42-14 rout by the Atlanta Falcons, the Rams' eighth defeat in nine games.

Gurley, held below 100 rushing yards for the 20th time in his past 21 games, was asked if he believes everybody on his team is showing up to play.

"I don't," the running back replied. "I really don't. We're just going through the motions. It looks like everybody's just playing to get through."

The Rams -- already last in the NFL in first downs, yards and points per game -- committed five turnovers in what ended up being their third consecutive lopsided defeat. Two of those turnovers led directly to touchdowns and were created by quarterback Jared Goff, 2016's No. 1 overall pick -- first on an interception and then on a sack-fumble.

Two more came on fumbles by the two men replacing injured running back Benny Cunningham -- Mike Thomas on the opening kickoff and Malcolm Brown on a rushing attempt. And another came on a pass that hit Kenny Britt in his chest and bounced into the hands of a Falcons defender in the red zone.

"We looked like a middle school offense out there," Gurley said after compiling 83 yards from scrimmage and punching in the Rams' first touchdown at the start of the fourth quarter. "I mean, I'm going to be quiet. My mom said if you don't have anything good to say, don't even say it. I'm just going to leave it as that."

Rams coach Jeff Fisher, who tied an NFL record with his 165th career loss, is getting most of the blame, but Gurley said, "Coaches don't have anything to do with it. This is about us. We're on the field."

The Rams are 4-9, guaranteed their 10th consecutive losing season, and must play the Seattle Seahawks on the road on Thursday night.

What can the Rams do to get back on track?

"I really don't know," Gurley said before repeating "really" eight times and then another "don't know."

"We all got to figure that out," he said.

Gurley says Rams looked like 'middle school offense'
Todd Gurley blasts the Rams for their effort and performance against the Falcons.