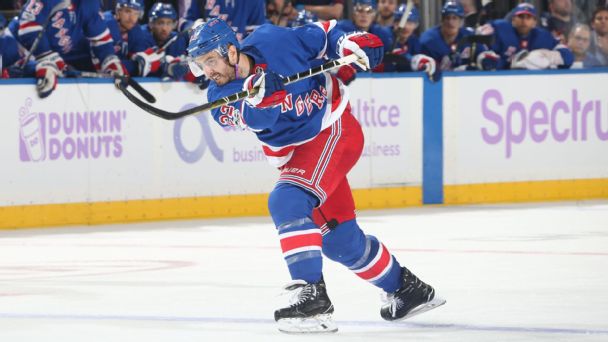 The 2017 calendar year featured plenty of movement in the NHL: new faces in new places, as well as old faces in old places (we're looking at you, Chicago Blackhawks, who insisted on getting the band back together).

Since the holiday season is one of good cheer, there's no need to lament the bad. (OK, we can't help but call out one questionable move:Steve Mason's two-year, $8.2 million deal with the Winnipeg Jets. Let's just say, given the play of Mason's backup,Connor Hellebuyck, that was an unnecessary expenditure by the Jets.)

And while this entire list could simply recite theVegas Golden Knights'expansion draft, we instead factored in which trades and signings had the biggest impact around the league. So here you have it: the eight best NHL transactions of 2017.

This isn't just recency bias. It was a splashy trade in which everyone got what they wanted, and probably walked away better for doing it. Avalanche general managerJoe Sakic finally extracted Duchene from what was becoming a toxic situation, while recouping a top-end defensive prospect in Girard, as well as useful draft ammo. Though Duchene hasn't flourished in Ottawa quite yet, Senators GM Pierre Dorian secured an elite center he had been tracking for some time while replacing another center (Turris) he wasn't likely to re-sign. Meanwhile, the Predators are already rejoicing over the deal. Turris is a star on Smashville's second line and is helping Kevin Fiala and Craig Smith become stars around him.

Last summer's free agency was devoid of drama -- except for this move. The 38-year-old walked away from San Jose, his home for the past 19 years, in hopes of helping Toronto win a Cup. In coupling the Marleau signing withDominic Moore's one-year, $1 million deal, Leafs GM Lou Lamoriello doubled down on his team being legitimate Eastern Conference contenders this season. Marleau has been solid, with 12 goals so far, and his veteran presence is a much-needed complement to Toronto's youth movement. Heck, he's even having the kiddies (Auston Matthews and Mitch Marner) over for dinner. How cute.

It's hard to single out one Vegas transaction -- James Neal is the real deal, Jonathan Marchessault is a steal at $750,000 -- but Fleury is the face of this nascent franchise. Although various backup goalies filled in admirably during his absence, Fleury ushered this franchise through a summer while it established an identity -- and hey, the three-time Stanley Cup winner proved he still has it between the pipes. Correspondingly, this pickup was important for the Pittsburgh Penguins, too, as it helped them navigate choppy salary-cap waters and move on to the younger and more affordable Matt Murray.

Chicago GM Stan Bowman acted swiftly and dramatically following his team's embarrassing, first-round sweep in the 2016-17 playoffs. He shipped Panarin, who had remarkable chemistry with Patrick Kane, to get Jonathan Toews' old buddy Saad back -- as well as cost certainty. While it's easy to say Columbus came out on top -- Panarin leads the Blue Jackets in points -- this wasn't a total bust for the Hawks. Kane, as suspected, is quick to develop chemistry with others, while Saad leads Chicago with six game-winning goals.

His rental was a bust for the Washington Capitals (just ask Barry Trotz), but Shattenkirk is still one of the league's elite puck-moving defensemen. By taking a hometown discount, Shattenkirk -- a native of New Rochelle, N.Y. -- allowed the Rangers to have their cake (i.e. sign, as usual, the best free agent on the market) and eat it, too (with a reasonable cap and term, New York bucked its trend of overspending). Shattenkirk's impact on the Rangers' power play is yielding tangible results.

Is it cheating to group three moves in one? Probably, but this trio of transactions is intrinsically linked, as GM Jim Nill announced that the Stars are a team ready to contend for a Cup -- now. Though Hanzal has been plagued by injuries and Bishop isn't playing like a stud No. 1 netminder yet, Dallas would not be in the thick of the Central Division race if not for adding these three.

It was a win-now move for GM Marc Bergevin. But, unfortunately, Montreal didn't do much winning to begin the 2017-18 season, so that's just not happening right away. But Drouin, 22 -- who had asked the Lightning to trade him -- will be a big piece of the Habs' future. Meanwhile, Tampa Bay didn't lose a step offensively and picked up a solid defensive prospect.