Rangers rallying around winger Mats Zuccarello, who's no stranger to playoff setbacks 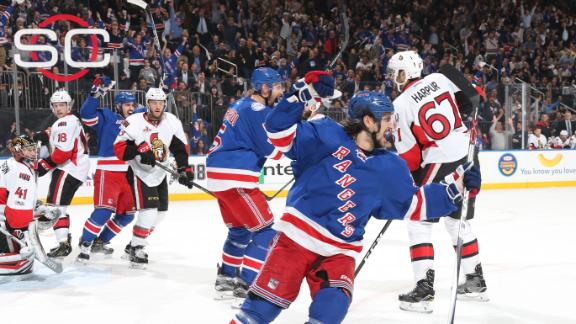 So perhaps we shouldn't be surprised that the 5-foot-8 winger came up big when the New York Rangers needed it most.

After dropping the first two games of the Eastern Conference semifinals to the Ottawa Senators, the Rangers were still reeling from a demoralizing 6-5 double-overtime defeat on Saturday -- in which they blew a two-goal lead late in the third period -- and desperate for a good start in Game 3. Fall behind early on Tuesday night, and the pressure would become almost unbearable.

Unbearable for anyone without Zuccarello's perspective on the game, perhaps. A little over two years ago,the Norwegian winger's hockey career almost ended. During Game 5 of New York's playoff series against the Pittsburgh Penguins, Zuccarello took a slap shot to his head from teammate Ryan McDonagh. Zuccarello suffered a hairline fracture of his skull and a brain contusion, and couldn't speak for four days.

He missed the rest of the playoffs but eventually -- after a month of speech therapy -- made a full recovery and returned to the Rangers at the start of the following season. Zuccarello scored a career-high 26 goals (plus 35 assists) in 2015-16, and had 15 goals and 44 assists this season. He led the Rangers in regular-season points both times.

He delivered again Tuesday, scoring the opening goal -- his 11th career playoff goal -- less than six minutes into Game 3, then provided the assist on Michael Grabner's goal a few minutes later. It took the pressure off Zuccarello's teammates, and the Rangers cruised to a comfortable 4-1 win.

"I think that we set the tone right away. All of us got the skill, but it's all about working hard and getting the pucks and winning one-on-one battles," Zuccarello said after the game. "A 4-1 win at home, we'll take it, and then we go on to the next one."

It was a big statement by New York's smallest player, who was shorter than most of the reporters gathered around him at his locker after the game. But the fact that the Rangers rallied around the 29-year-old was no surprise to their coach.

"First of all, he's a real good person. He's fun to be around with, always upbeat and always positive, an extremely hard worker," Rangers coach Alain Vigneault said of Zuccarello on Wednesday. "He's figured out a way to contribute at both ends of the rink. He's got a real good skill set, but his best skill is his competitive nature. He's a real competitive kid -- he wants to be out there, and he wants to be a difference maker."

He was certainly a difference-maker on Tuesday night in the first period, which could prove to be the turning point of this series -- and these teams' seasons. The Rangers came out flying around the ice Tuesday night, seemingly first to every puck, recording 15 shots in the first 20 minutes, compared to just five by the Senators.

"We wanted to make sure that we got pucks in deep and put pressure on them, and we did that," Vigneault said. "There's no doubt in that first period there we had pretty good pace out there."

"There's no X's and O's in this game for me. The game was lost in the first period," Boucher said. "They wanted it so badly, and we didn't match that, period."

Zuccarello certainly looked like he wanted it badly -- and again, we shouldn't be surprised. Last month he received the Steven McDonald Extra Effort Award -- named for the late NYPD cop who was paralyzed in a Central Park shooting and given annually to the player voted by fans as the Ranger who "goes above and beyond the call of duty" -- for the second year in a row and the third time in the past four seasons.

He's tied for the team lead in goals this postseason, with four, and uninterested in dwelling on his performance in Game 3. The Rangers' sparkplug was already looking ahead to Game 4.

"We can also play better," Zuccarello said. "I think we dipped a little in the second and third [periods], so we've got something to improve on."

Rangers roll in Game 3
Coming home down 2-0, the Rangers get a goal and assist from Mats Zuccarello in a 4-1 victory over the Senators.