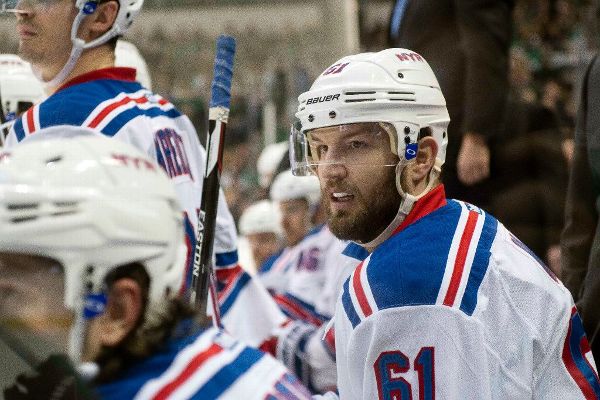 The Boston Bruins continued solidifying their playoff push by acquiring six-time All-Star forwardRick Nash in a multiplayer trade with the Rangers that leaves New York retooling for the long-term future.

New York will retain 50 percent of Nash's remaining salary for this season, according to TSN.

The 33-year-old Nash leaves the rebuilding Rangers to join a Bruins team that ranks third in the Eastern Conference standings with 82 points. Nash is in the final year of his contract that carries an annual cap hit of $7.8 million, and he is eligible to become an unrestricted free agent this summer.

Nash traveled to Buffalo and made his Bruins debut Sunday in a 4-1 loss to the Sabres, playing mostly right wing on a line with David Krejci and Jake DeBrusk.

"I felt good on the ice, I felt strong," said Nash after the game. "Took a couple pucks to the net. Had a post. I felt pretty good. I thought with my linemates, we kind of clicked."

Nash rejoinsNick Holden in Boston, as the Bruins acquired the former Rangers defenseman in a trade last week. The Rangers also traded Michael Grabner ahead of Monday's trade deadline, and continue to shop other players.

"It was a strange last few weeks in New York, but I've moved on and I'm excited about this opportunity,'' Nash said earlier in the day.

Nash knew he was on the move due to being in the final year of his contract, eligible to become an unrestricted free agent this summer, and having the Rangers ask him to submit a list of teams he'd consider joining. The Bruins topped his list, although Nash acknowledged he was ready to go almost anywhere.

"I wasn't going to hold them hostage or anything like that, but I wanted to go to a place that wanted me and a place that had a chance to win,'' he said. "And I think Boston fits those perfectly.''

For the Rangers, trading Nash further signals their plans to overhaul the aging core of a roster that helped New York make the playoffs in each of the previous seven seasons, including the team that lost the 2014 Stanley Cup Final in five games to Los Angeles. New York is slipping out of playoff contention, with a 5-17 record in the past 22 games since Jan. 7 and a seven-game losing streak after a 3-2 loss Sunday night against Detroit.

In early February, the Rangers asked Nash for a list of 12 teams he would allow to be traded to as part of his modified no-trade clause. The team later released an open letter that hinted New York would be moving some of its "familiar faces."

In anticipation of trading Nash, the Rangers had the forward sit out their past two games to avoid possibile injury.

Adding the Bruins' first-round pick gives the Rangers nine selections in this year's draft, including six in the first three rounds.New York might not be done dealing, with captain Ryan McDonagh also considered to be on the trading block.

This is the second time Nash has been traded in his career. He was part of a 2012 offseason trade that landed him with the Rangers after nine seasons with the Columbus Blue Jackets.

Spooner made his Rangers debut against Detroit and assisted on both New York goals.

Beleskey has 10 seasons of NHL experience, including the past three with Boston. He had zero points in 14 games with Boston before being demoted to the minors in December.