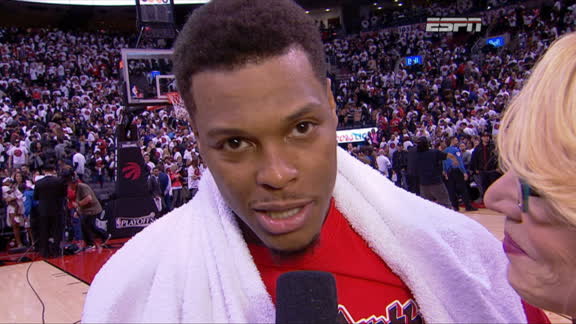 "LeBron is probably one of the best players in the league besides Stephen (Curry)," Lowry told ESPN's Doris Burke when asked about the Eastern Conference finals.

The comment led some to believe that he was slighting James.

"I would never throw (any) shade on one of the greatest players in history of basketball," Lowry said prior to Game 1 at Quicken Loans Arena. "I would never do that. Some people will take it for too much. LeBron is LeBron James. He'll probably be (one of the) top three players of all time when he retires."

James, who made no secret of his desire to face his old team, the Heat, said he did not take offense to Lowry's comment.

"None taken," James responded when asked about it.

Lowry averaged 31 points on 66 percent shooting in three regular-season games against the Cavaliers, as the Raptors went 2-1.

"The regular season means nothing," Lowry said. "They've played tremendous in the postseason. It's a new series, a new season. We've got to go out there and have a competitive mindset."

"We can't worry about what everybody else says or what they think," he said. "We got the No. 2 seed for a reason. At the end of the day, people going to have their opinions and that's what opinions are for."

After struggling with his shot early in the playoffs, the two-time All-Star has posted averages of 26.2 points, 5.8 assists, 5.7 rebounds and 41.9 percent shooting in his past six games.

"I feel great, my body feels great," said Lowry, who had been bothered by a sore right elbow since late March. "I feel like a million bucks. My mind's great. My body's great. That's all the hard work I put in (working out over the summer). That's why I did it."