Raptors trying to focus on Wizards, not just Paul Pierce 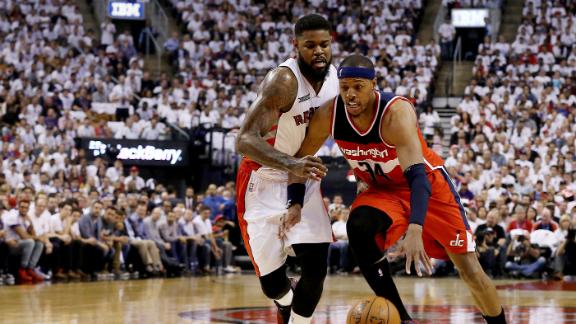 TORONTO -- It engaged their fans and prompted a profane response from their general manager, but the Raptors want to move past the focus on Paul Pierce's commentary as they prepare for Game 2 of their first-round series with theWashington Wizards.


"Paul Pierce is a Hall of a Famer. I give him a lot of credit, he got everybody's attention," Raptors guard Greivis Vasquez said Sunday. "If we keep talking about Paul Pierce this is going to be a Paul Pierce series, not the Wizards. What he's doing is motivating his team, talking trash, so why would we talk trash? We don't have any trash talkers in our locker room."

Pierce grabbed attention in a pre-series interview when he said the Raptors didn't have "it," and didn't worry him as an opponent. Then Pierce, after he prompted Raptors fans to boo him heavily and GM Masai Ujiri to issue a profane response at a rally before Game 1, went out and scored 20 points in the Wizards' 93-86 overtime victory in Game 1.


After the win, Pierce said he felt he could play a "psychological war." The Raptors, despite the lead of their GM, don't want to further engage.


"We give him a lot of credit, he's got big balls, that's the reason he's The Truth," Vasquez said, referring to Pierce's nickname. "What else can I tell you? Good for him. He's a Hall of Famer. I love his game, good for him. I've got a picture of him. He's an idol, that's it. But we've got to play. But you can stop asking questions about Paul Pierce."


When word of Vasquez's comments reached Pierce in Washington, where the Wizards returned for two practices before Game 2 on Tuesday, he chuckled but said he had no comment. Wizards coach Randy Wittman dryly replied: "Well, I think all NBA balls are the same size."


It might be good for the Raptors not to incite Pierce. Wizards guard Bradley Beal said he feared for Toronto when Jonas Valanciunas set a hard screen that sent Pierce to the floor in pain early in the third quarter.


"They 'p'd' him off a little bit," Beal said. "He got screened and hit pretty hard. He likes contact, so I know when I see him on the ground -- that is not happening often -- he is going to be upset about it. I was kind of scared for Toronto because when Paul gets going, he gets going."


"His leg has to be broke and probably amputated in order for him not to play or for him not to try to win," Beal added of Pierce, who admits he has been playing with a heavily bandaged knee that has been bothering him for about 40 games. "He has the guts to take those big shots, even with a 7-footer in his face. Just his confidence the whole game, we just feed off it."


The Raptors, however, do have some things to do to deal with Pierce. Wittman found some success putting Pierce at power forward in a small lineup for stretches in Game 1, though the Raptors quickly made some adjustments within the game. Nonetheless, that lineup was a plus-5 in a game that went to overtime, making it a difference-maker.


"I guess Paul has [talked trash] before ... and he's a master. He's got a championship, so I guess he's been successful at it," Raptors coach Dwane Casey said. "I haven't seen very many times that people talk their way to winning a game. If that's what he feels, that's fine. He's a great player and his game speaks for itself more than anything he's put in print."