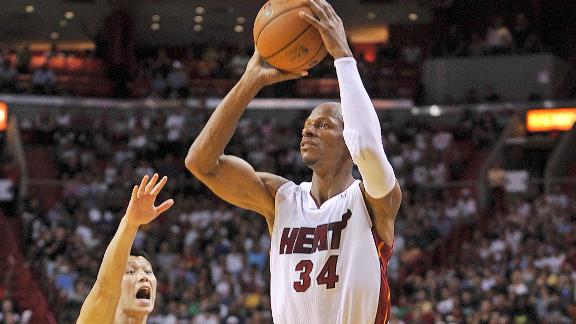 Allen, 39, still has not decided whether he wants to return for a 19th season but has been keeping in shape and doing on-court work to keep his options open. Additionally, Allen has been in contact with teams to explore his possibilities and may take meetings during the upcoming All-Star break.

Numerous teams have been staying in touch with Allen in hopes of signing him, including the Washington Wizards, Cleveland Cavaliers, Golden State Warriors, San Antonio Spurs, Miami Heat, Los Angeles Clippers and, recently, the Atlanta Hawks.

Allen's potential role with a team is expected to be a deciding factor. He shot 39 percent from 3-point range and averaged 9.3 points while playing 26.4 minutes a game in 20 playoff games last season for the Heat after shooting 38 percent from 3 during the regular season.

The Cavs have left a roster spot open for the past month, ostensibly saving it for Allen. They have been confident they will be his choice if he returns because of his close relationships with former Heat teammates LeBron James, Mike Miller and James Jones, who are now with the Cavs.

James met with Allen last month during a trip to Miami, and all three players regularly keep in touch with him. They have been recruiting him, off and on, since July.

The Hawks, however, have become more of a contender as they have developed into the Eastern Conference leader. Unlike the Cavs -- who play a tight eight-man rotation that excludes veterans like Miller, Jones and Shawn Marion -- the Hawks have a need for an additional wing player, as Thabo Sefolosha is out up to two months with a calf injury.

Atlanta is a high-volume 3-point-shooting team that plays more to Allen's style. Atlanta is also closer to his family in Miami.

Allen will have no shortage of interested teams if he announces he's coming back. The Wizards and Heat both also have needs at the position, and the Warriors felt they were close to signing Allen earlier this season.

Allen Decision Coming After All-Star Game
Brian Windhorst discusses which teams would make a good landing spot for Ray Allen if he decides to make a return to the NBA.