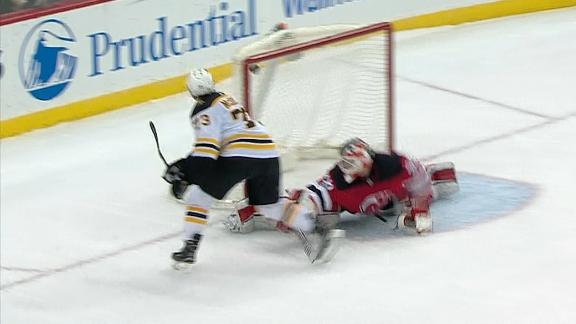 What was your favorite highlight from Thanksgiving eve?

Greg Wyshynski: I hate the shootout with every fiber of my being, but if it needs to exist then it should serve as a highlight-generating platform for the skills of high-end players. And that was the case in shootout wins for the Florida Panthers and Boston Bruins on Wednesday night.

Aleksander Barkov scored one of those delightful one-handed Peter Forsberg-esque goals against the Toronto Maple Leafs that look so effortless and are nightmare fuel for goalies:

Meanwhile, Bruins rookie defenseman Charlie McAvoy scored on this nifty move to defeat the New Jersey Devils in the 11th round (deep sigh) of the shootout:

Again, if we're going to have the shootout, at least have it put great players in the spotlight, as they were Wednesday night.

(But honestly, the real answer is my friend Tarik El-Bashir of CSN Washington officiating a Washington Capitals Mites on Ice game in which the youth players were all dressed like turkeys.)

Emily Kaplan: I was back home to New Jersey on Wednesday night for Thanksgiving (happy Thanksgiving, American readers!), so it was a treat to tune into the MSG broadcast of the New York Rangers game. Good thing I was on the couch in time for the puck drop. The Rangers had a wicked start in an impressive 6-1 win over the Carolina Hurricanes. New York struck just 52 seconds into the game when Chris Kreider took a pretty feed from Brendan Smith and beat a slightly baffledScott Darling, who left a ton of open net. Perhaps Darling was still recovering less than two minutes later. As New York prepped for a line change, Mika Zibanejad flicked the puck from center ice. Darling appeared poised to catch the high lob with his glove, but it somehow slipped through his fingers and landed in the net. There's no other way to describe what happened to Darling on that play, other than: he whiffed. Badly. By 11 minutes into the first, the Rangers were up 3-0. Thanks to 30 saves from Henrik Lundqvist and another offensive outburst in the third, New York was able to mask a few miscues to win this one in a rout.

The Rangers have won eight of their last 10 while scoring at least three goals in 13 of their last 16. A team that was left for dead in the Eastern Conference a few weeks into the season -- with concerns about whether they missed the championship window on Lundqvist, and with rumors swirling about the fate of coach Alain Vigneault -- has been injected with life. The Rangers are playing loose -- and I'm not just talking about Mats Zuccarello breaking out some feisty dance moves in the hallway before the third period began. However, that clip of the 5-foot-7 winger jigging around shows they are enjoying hockey. And so perhaps that's the best thing I saw on Wednesday. It was a treat to watch.

Chris Peters: There were so many things to choose from on a packed Wednesday night slate, but the play I think we'll all be talking about is what John Tavares did in overtime to set up Josh Bailey's game-winning goal. The New York Islanders captain put together an incredible display of skill and strength to put his linemate in a position to end the game.

With Philadelphia Flyers center Sean Couturier, one of the league's best young defensive forwards, all over him, Tavares played a little game of full-contact keep-away. Tavares went back and forth, never losing control of the puck as Couturier tried desperately to pin him against the boards. Tavares slipped out and sent a perfect pass to Bailey, who was so wide open he had two cracks at the net before putting it through.

There is nothing Couturier could have done differently to prevent that from happening without getting a penalty. The defending of the pass could have been better, but you can't fault the other two Flyers for thinking Couturier had Tavares pegged.

That goal capped a three-point night for Bailey, who has quietly put together a great season. He now has 26 points in 21 games. Tavares' highlight-reel effort earned him one of his two assists on the night, to improve his point total to 25.

Darling gives up easy goal against Rangers
Scott Darling doesn't catch the puck and the Rangers score easily in a 6-1 win.