Ready to go jersey shopping? Your guide to the 2018 MLB draft 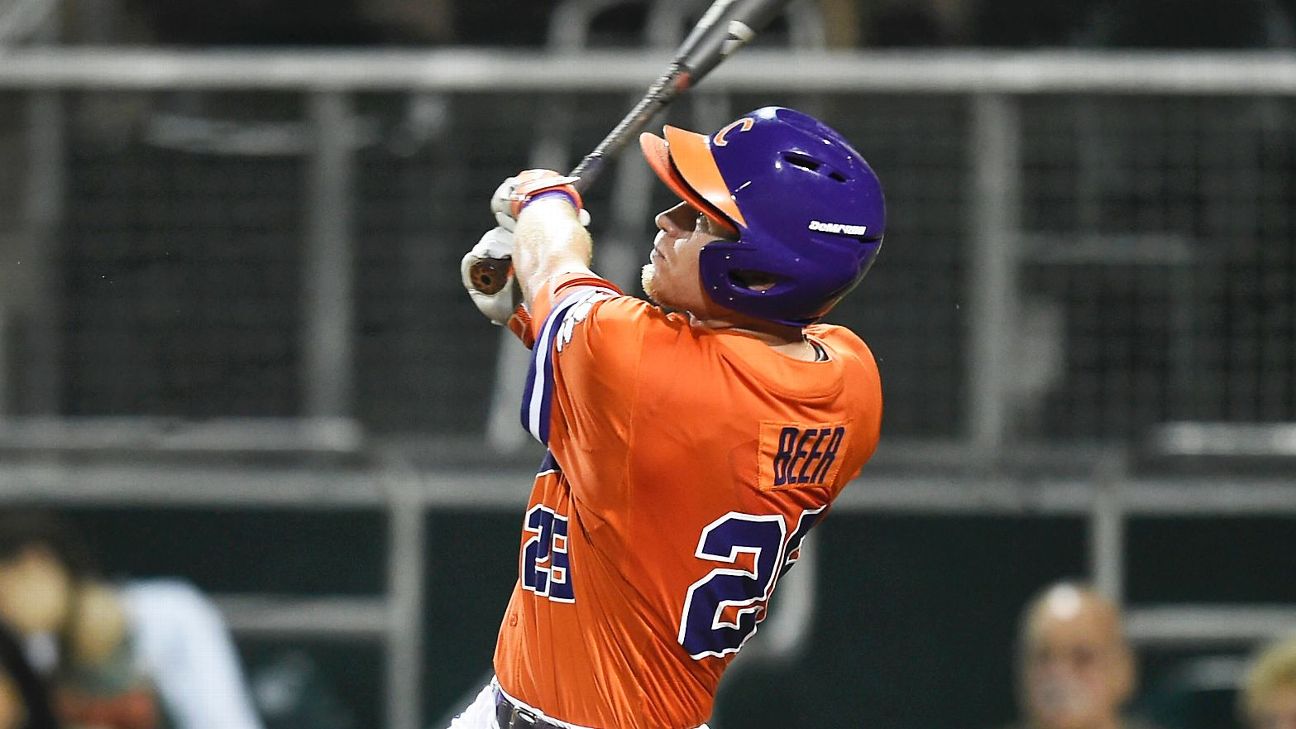 ESPN
By David Schoenfield
We take a break from our regularly scheduled programming to remind you the MLB draft kicks off Monday. Be sure to check out Keith Law's Big Board of the top 100 prospects and his mock draft heading into the first round. In the meantime, he's our general preview of a few things to watch (all stats through Saturday):

Who do the Tigers take with the first pick?

The Tigers are drafting first for the second time in franchise history and hope this pick turns out better than Matt Anderson, the first pick in 1997 who finished with a 5.19 ERA over 257 relief appearances. While there's no clear-cut No. 1 talent in this draft, the consensus prediction is Casey Mize, a right-hander from Auburn with a great baseball name.

Mize is more finished product than projection and should advance quickly into a big league rotation, perhaps as early as 2019. He's 10-5 with a 2.95 ERA and a sterling 151-12 strikeout-to-walk ratio. Proving how difficult the baseball draft can be, there is no guarantee even with the first pick. Three of the past four first overall picks have struggled:

The Astros took Mark Appel in 2013 ahead of Kris Bryant. Appel never reached the majors and retired this spring.

The Astros took high school lefty Brady Aiken in 2014, but couldn't reach a bonus agreement after issues showed up in his medicals. Aiken blew out his elbow in 2015, but the Indians still re-drafted him in the first round. He has yet to pitch in 2018. (At least the Astros received a compensation pick for not signing Aiken and took Alex Bregman in 2015.)

The Phillies took outfielder Mickey Moniak in 2016 and he already looks like a potential bust, hitting .242 at Class A with no home runs and a 46-4 strikeout-to-walk ratio.

Late update: Law's Mock Draft 4.0 takes a new twist and has the Tigers going with Georgia Tech catcher Joey Bart, with Mize falling to the Phillies at No. 3. The last catcher to go first overall was Joe Mauer in 2001. The other three catchers taken first overall were Danny Goodwin (actually taken twice), Mike Ivie (who had to move to first base in the majors after developing the yips), and Steve Chilcott, who never reached the majors.

Is Nick Madrigal the next Jose Altuve or Dustin Pedroia?

The Oregon State shortstop might move to second base in the pros, but that's not what draws the Altuve and Pedroia comparisons. It's the combination of hitting prowess and size: He's listed at 5-foot-8, and that might be generous. The only middle infielder that short taken in the first round was Joey Cora, drafted 23rd overall by the Padres in 1995.

Nobody questions Madrigal's bat-to-ball skills, although the power will be a question in the pros. He missed some time with a hand injury this year, but in 31 games he's hitting .406 and has struck out just five times in 146 plate appearances. Law has Madrigal going fifth overall to the Reds in his Mock Draft 4.0 and he could go as high as third to the Phillies and even first to the Tigers. Like Mize, he should advance quickly and has a high floor. You never want to project somebody to reach the level of Altuve or Pedroia, but the recent success of short players has at least allowed scouts to view Madrigal as one of the best talents in the draft.

Will the Florida Gators have three first-round picks?

RHP Brady Singer entered the season as a potential No. 1 overall pick, struggled a bit early on, came on strong again, missed a couple of weeks with hamstring issues, then returned in regional play. He's 11-1 with a 2.27 ERA and 98 strikeouts in 95 innings. Singer was a second-round pick out of high school by the Blue Jays, but scouts remain a little divisive on him thanks to a funky delivery. Some think he ends up as a reliever. Law has Singer going fourth to the White Sox, pointing out they have a history of drafting pitchers with unusual deliveries (such as Chris Sale).

3B Jonathan India could go in the top 10. He's hitting .364 with 18 home runs and a .504 OBP in 59 games as one of top college hitters this season. The one potential concern: His 48 strikeouts are high for an elite college bat (but at least he has drawn 49 walks).

RHP Jackson Kowar is 6-foot-6 and sits at 95 mph. He has a 3.21 ERA and 91 strikeouts in 92 innings, but a walk rate almost twice that of Singer's. He could go middle-to-late first round.

What is the strength of the draft?

Looks like high school pitching. Law has eight high school pitchers going in his top 30 picks. One of the most intriguing is Carter Stewart, a right-hander from Melbourne, Florida, who hits 98 mph with his fastball and has elite spin rate on his curveball.

Who are a couple of boom-or-bust types?

Maybe South Alabama outfielder Travis Swaggerty. His tools are as good as anybody's in the draft, with plus speed and a plus arm (he threw 92 as a pitcher in high school) and some power at the plate. He has hit just .296 in a mediocre conference, however, and though he has drawn 54 walks he has struck out 38 times in 57 games. He's also on the short side -- maybe 5-foot-8, not his listed 5-10. If everything comes together, he could be an elite leadoff hitter in the Brett Gardner mode, with more power.

If not Swaggerty, maybe high school outfielder Jarred Kelenic, who could be the first player from Wisconsin drafted in the top 10. Despite coming from a cold-weather state, he has a strong track record for scouts after playing for the U.S. 18-and-under national team, and they like the power/speed combo. He's old for his class, however, turning 19 in July, and people who have studied draft history know that's a red flag.

Arizona prepster Nolan Gorman is another one. He has as much raw power as anybody in the draft, which could land him in the top 10, but there are concerns about the overall hit tool and the likelihood of remaining at third base.

Who is the biggest wild card?

How about Oklahoma outfielder Kyler Murray? One of the best athletes in the 2015 draft, Murray instead enrolled at Texas A&M to play football and baseball. He later transferred to Oklahoma and is the favorite to replace Heisman winner Baker Mayfield at quarterback in the fall. He hadn't played much baseball recently, but then hit .296/.398/.556 this year with 10 home runs -- and 56 strikeouts in 51 games. The tools are juicy enough to get somebody to take him and hope he'll focus on baseball. Law has him ranked No. 35 on his Big Board.

Who are the teams to watch?

The Rays and Royals both have five picks on the first day of the draft, which includes the first round through the second round of compensation picks (the first 78 picks in the draft). The Rays don't pick until 16th in the first round and the Royals 18th, but both have more bonus pool money to spend than the Tigers. The Cubs and Indians also have four picks each, with Cleveland picking 29th, 35th and 41st.

Will anybody draft Luke Heimlich?

The Oregon State senior lefty has some of the best stats in college baseball: 14-1, 2.49 ERA, 139 K's in 104 innings and just three home runs allowed after posting a 0.76 ERA as a junior with no home runs in 118 innings. Just before last year's draft, however, it was reported that when he was 15 years old, Heimlich had pleaded guilty to molesting his 6-year-old niece. Heimlich removed himself from the team's College World Series roster and went undrafted.

Heimlich's initial plea deal in 2012, written in his own hand, reads "I admit that I had sexual conduct with my niece." Now, however, Heimlich says he accepted the deal only to avoid a trial and possible jail time, and had consistently denied any wrongdoing. "Nothing ever happened, so there is no incident to look back on," he told The New York Times in May. "There is no way he didn't do it," the niece's mother said.

He throws in the 90s with a curveball and changeup and good command. He's a second-round type of talent. Several teams -- most? -- have removed him from their draft boards, according to reports. Will somebody take a chance?

As always, there are plenty of them. A few to look for in the early rounds:

LHP Ryan Weathers is the son of former big league reliever David Weathers. The high schooler from Tennessee is a potential top-10 pick.

SS Brice Turang is the son of Brian Turang, who played two seasons with the Mariners. Law has him going No. 26 to Boston.

C/IF Noah Naylor is the brother of Padres prospect Josh Naylor, the 12th overall pick in 2015, who is having a breakout season in Double-A. Noah could be just the eighth Canadian taken in the first round.

RHP Kumar Rocker is a potential first-round pick. He's 6-foot-5 and 250 pounds -- the son of former NFL defensive lineman Tracy Rocker (who won the Lombardi and Outland trophies at Auburn).

OF Griffin Conine, son of Jeff, entered the season as a potential top-10 pick, but the Duke product has hit just .265, albeit with a 15 home runs. He now projects as a second-round selection.

OF Tristan Pompey is the younger brother of Blue Jays outfielder Dalton. The Canadian plays for the University of Kentucky and could go in the second or third round.

OF Alek Thomas is the son of the White Sox strength and conditioning coordinator Allen Thomas. He has committed to play baseball and football at TCU, so could be a tough sign unless he gets drafted high enough.

Which player is potentially most destined for big replica jersey sales?

Clemson first baseman Seth Beer. Or rather, make that Clemson DH, as some feel he's so limited in the field that he projects as an AL-only player. Beer was the college player of the year as a freshman when he hit .362/.535/.700 with 18 home runs, but he hasn't matched those numbers as a sophomore or junior, hitting .316 with 20 home runs this year. He could slip into the back of the first round. 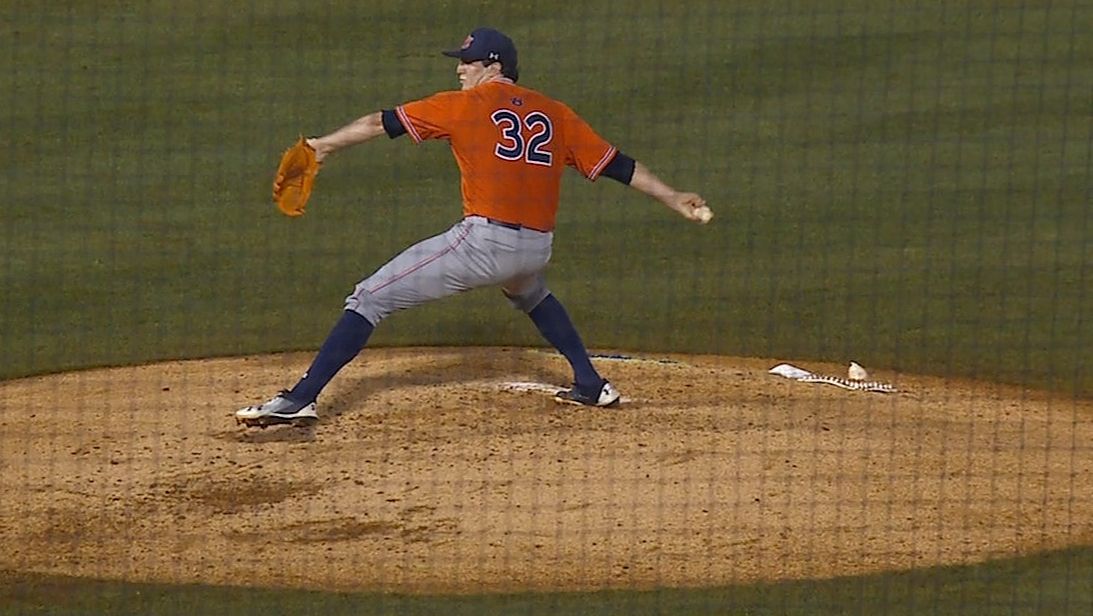 Mize the favorite to be No. 1 pick in MLB draft
See why Auburn pitcher Casey Mize is likely to be drafted first overall by the Detroit Tigers on Monday.