Red Sox advance to ALCS after dramatic bottom of the ninth 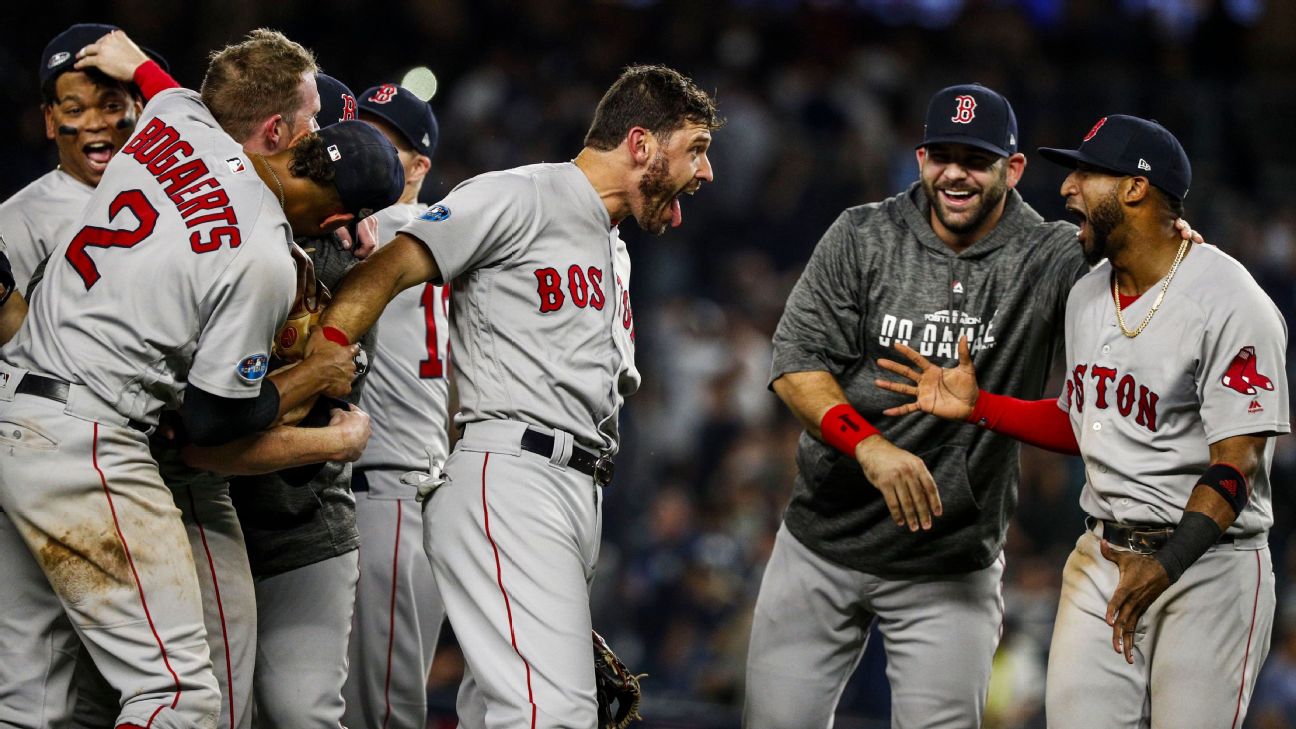 NEW YORK -- In the annals of ways to clinch a playoff series, leave it to the Boston Red Sox and New York Yankees to come up with a new plot twist on your typical stomach-churning, fingernail-chewing bottom of the ninth.

The Red Sox had cruised into the inning with a 4-1 lead and closer Craig Kimbrelonly three outs away from sending them to their first American League Championship Series since 2013. The Red Sox managed to hold on for a 4-3 victory in Tuesday's Game 4 of the division series, but only after what Boston shortstop Xander Bogaerts termed "one of the most nerve-wracking games."

Indeed, the Red Sox survived a near walk-off grand slam by Gary Sanchez and then had to momentarily hold off their celebration in the middle of the diamond as the final out at first base was confirmed via replay review.

"They stay in the moment," Boston manager Alex Cora said of his team, which had set a Red Sox franchise record with 108 wins in the regular season. "They play the right way, run the bases well, play good defense. Yesterday wasBrock [Holt]and the lefties. Today wasIan [Kinsler]and [Eduardo Nunez] andChristian [Vazquez]. We have a great team. We're very versatile. We count on everybody, and it was a great team victory."

The ninth inning came down to the final two outs in a tension-filled Yankee Stadium. Kimbrel walked Aaron Judge to start the rally and later hit Neil Walker with one out and the bases loaded to make it 4-2. That brought up Sanchez, who lifted a towering fly ball to left field on a 3-2 fastball. It sounded good. The crowd roared. Andrew Benintendi drifted back to the warning track to make the catch.

"The final of that game, with guys on base, Gary Sanchez hit that ball up in the air," Bogaerts said. "Benny was going slowly back to the wall and I'm like, 'Stop going back. You're making me nervous.'"

"I was just saying, 'Stay in the park.' Fortunately, it did. A feeling of relief," he said.

Center fielder Jackie Bradley Jr.knew it was an out.

"I had a good view at it," he said from the champagne-soaked visitors clubhouse. "I didn't think it was going to go. It was too high."

The sacrifice fly made it 4-3 with two outs. Kimbrel still had to get rookie Gleyber Torresout. The batter dribbled a 1-2 curveball down the third-base line, Nunez charged, fielded the ball with both hands and made a lightning-quick throw, with first baseman Steve Pearce stretching wide to record the out. After the review, the game was over.

"I'm going to say it again: Tremendous play by Nunez, man," Bogaerts said. "Believe me, I've played third base, and I know that play could have gone either way and it could have been a different ballgame. I'm so happy he made the right choice and made the play."

As Bogaerts alluded, Nunez made the decision to throw the ball and risk an error that could have tied the score.

The game also featured a surprise appearance from Chris Sale. After Rick Porcello held the Yankees to one run in five innings and relievers Matt Barnes and Ryan Brasier both threw perfect innings in relief, Sale came on in the eighth.

"The first thing I said to AC when I came into the clubhouse today, I told him I wanted the ball at some point," Sale said. "I told him and walked away, and he started laughing, so I didn't know if that was a good or a bad thing, but it worked out."

Cora made the decision late in the game.

"He's been talking about it for three days already," Cora said of Sale afterward. "In the seventh, we got together -- [pitching coach] Dana [LeVangie], [bench coach] Ron [Roenicke] and myself. ... Everybody was on board. I even shouted to the dugout, 'Hey, we're all in. He's coming in.'"

As Betts went out to right field and saw Sale trotting in from the bullpen, he said he thought: "We're about to put up a zero."

Sale did just that -- in contrast to entering in relief in Game 4 of last year's division series against theHouston Astros,when he gave up a tying home run to Alex Bregman in the eighth and then another run and lost the game. What did he learn from that experience?

"Don't suck. Seriously, it was a very humbling experience,"Sale said. "You learn more from your mistakes sometimes than you do your successes. You just try to flip the script and be better from it."

Sale's performance set the stage for the wild ninth.

While losing to a strong Yankees team wouldn't have been a disgrace, the victory does help validate the success in the regular season, especially after the Red Sox flamed out in the division series against the Astroslast season and were swept by the Cleveland Indians in 2016.

The series win sets up a titanic showdown in the ALCS between the 108-win Red Sox and the 103-win and defending World Series champion Astros. It's the first championship series matchup of 100-win teams since 1977, when the Yankees beat the Kansas City Royals in the ALCS. It's only the third postseason series since then of 100-win teams, joining last year's World Series and this just-completed series between the Red Sox and the Yankees.

"I love these guys. These guys did a hell of a job this year," a goggle-wearing Bogaerts said. "Coming in here, Yankee Stadium, a lot of guys doubted us. ... We had the off day and I'm putting on the TV and everything you hear is, 'Yankees are going to win it in four.' ... It was a tough off day. How can we have 108 wins and they're like, 'Yankees are going to win in four'?" 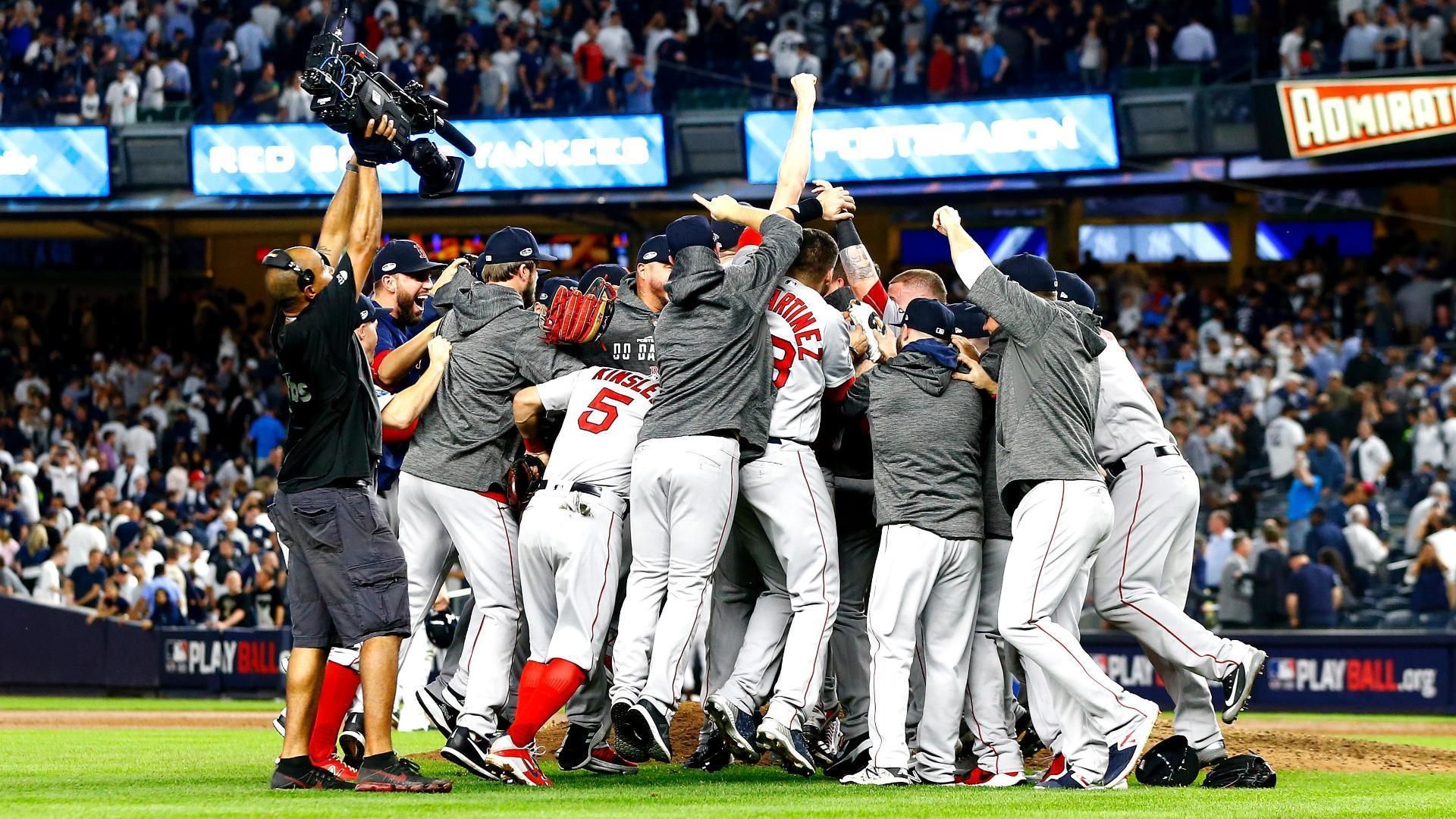