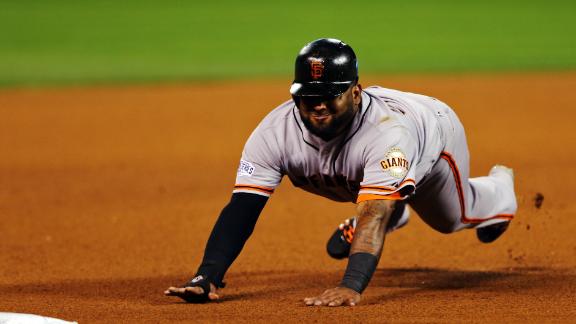 PHOENIX -- While there have been reports, most notably from Buster Olney of ESPN.com, that the San Francisco Giants are optimistic about re-signing Pablo Sandoval and that a deal could happen soon, an executive with another major league club said Tuesday that the Red Sox are "all-in" on the free-agent third baseman and are making a big push to sign him.

Sandoval is seen as an ideal fit for the Red Sox because he meets their need for a left-handed bat (he's a switch-hitter), he plays third base (a black hole for Boston in 2014), and he could ultimately succeed David Ortiz as the team's designated hitter.

"He's more of an American League player," said the executive, an allusion to the fact that Sandoval, who has remained nimble afield despite carrying considerable weight, might ultimately slow down defensively. "And he can really hit."

Red Sox GM Ben Cherington said Tuesday he met the day before with Gustavo Vazquez, Sandoval's agent, and that the sides had a "constructive" conversation.

"We've met with several [agents], including [Vazquez], and had good constructive conversations with a lot of guys already," Cherington said. "All those conversations will continue. I don't expect anything to happen this week, or maybe in the near term. This may play out. I expect many [conversations] to continue over the next few weeks."

Vazquez has said publicly that Sandoval is seeking a six-year deal, which would take him through his age-34 season. Various projections have forecast him to be in line for a salary in the $90 million to $100 million range.

Cherington also noted Tuesday that while the Red Sox prefer contracts of shorter duration, they are willing to make exceptions.

"It's never been a hard policy," Cherington said at the baseball GM meetings. "We've made exceptions, and I'm sure there will be another exception. It's a case-by-case thing. If all the boxes are checked, sure, there will be a longer term deal. It's just as we've done in the past."

Cherington was asked if the Red Sox, who have expressed an aversion to offering five- or six-year deals to pitchers past the age of 30, would be willing to make an exception for free agent left-handerJon Lester, who turns 31 in January.

"I guess it depends on what you mean by exception," Cherington said. "We're interested in having a conversation with him. We know guys like him, and there are others like him at the upper end of the free-agent market, are going to command good contracts.

"So, certainly our history with him and our comfort level with him, I suppose that's one of those boxes I was talking about that's checked. Beyond that, I can't say more.

"We need to add to our rotation. He's obviously a known commodity, a proven guy in our market. He's of obvious interest."