Red Sox following through with protest to prevent future issues 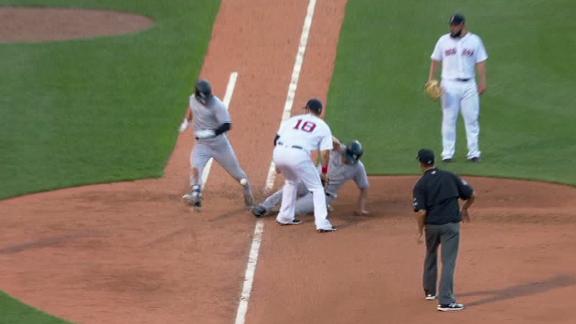 BOSTON -- One day later, the Boston Red Sox are pressing forward with their protest of Saturday's game against the New York Yankees.

It isn't that Matt Holliday's bizarre slide back into first base in the 11th inning cost the Red Sox in a 16-inning 4-1 loss. The Sox say it's more about making sure such a play isn't allowed to happen again.

Red Sox manager John Farrell contends that Holliday interfered with first baseman Mitch Moreland's ability to catch a return throw from shortstop Xander Bogaerts on what could have been a double play. Although Holliday had already been called out on a force play at second base on a ground ball by Jacoby Ellsbury, he charged back to first. The throw got by Moreland and hit Ellsbury, who was ruled safe.

"I still firmly believe there was interference on the play," Farrell said Sunday before the Red Sox split a day-night doubleheader against the Yankees at Fenway Park. "If it goes unaddressed or goes without any kind of further attention brought to it, who's to say you can't instruct runners to do the same going forward?

"If there was no interference, [Moreland] would've had access to the bag. He was taken out of it by the returning runner [Holliday]."

According to Farrell, Holliday attempted the same play a few years ago against the Milwaukee Brewers. Holliday explained after Saturday's game that he wasn't going to run into a tag, seemingly unaware that he was out on a force play.

Said Farrell: "It's a heads-up play, to be honest with you. If you know it's a dead out, retreat to the bag, slide in. It's not like he was going after anyone with physical intent, but he was in the middle of the play."

After it occurred, Farrell asked the umpires to review the play. The umpires called New York for what crew chief Gary Cederstrom described as a "rules check," not a replay. When Farrell was informed that the call wouldn't change and Ellsbury would remain at first base, he informed the umpires that he was protesting.

The Red Sox have until Sunday night to formally file their protest with Major League Baseball, according to Farrell.