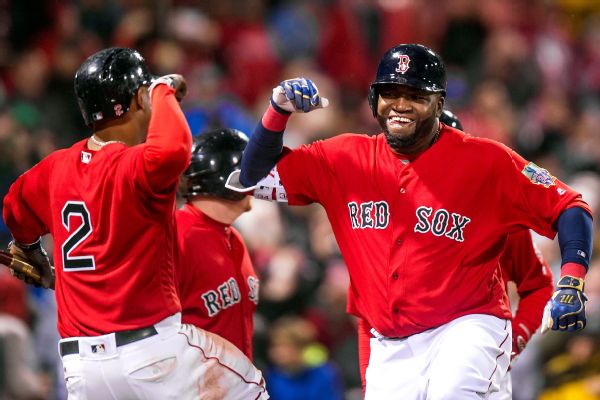 SCOTTSDALE, Ariz. -- The Red Sox might replace retiring designated hitter David Ortiz internally or with a short-term free agent, rather than pursue one of the prominent long-term options on the market, Boston's president of baseball operations Dave Dombrowski told reporters at the MLB general managers meetings on Monday.

Ortiz, a 10-time All-Star, hit 38 home runs, drove in 127 runs and led the major leagues with an OPS of 1.021 in the final season of a 20-year career. He won the Hank Aaron Award as the American League's best hitter this season.

Edwin Encarnacion, Jose Bautista and Mark Trumbo are among the top power hitters available on the free-agent market. But they are all expected to seek multiyear deals, and Dombrowski said the Red Sox might take a more modest approach to filling their DH spot.

"I'm not sure if we're going to do it internally with a lot of the people we have or go outside the organization," Dombrowski said. "We know we can never replace [Ortiz's] presence. But we have a lot of guys who can play different positions. We have young guys coming that we like a great deal, so we'll just kind of have to wait to see what happens there.

"There are a lot of different factors. One is affordability, but not only that. How long do you want to tie somebody up for that position when we have a lot of young players coming? That's a very important part of it."

First baseman Hanley Ramirez is under contract through 2018 and has a vesting option for 2019, and Pablo Sandoval is expected to return from a shoulder injury and be back in the mix for the starting third-base job next season. With Travis Shaw capable of playing both corner infield positions, the Red Sox have some flexibility to use both Ramirez and Sandoval at DH.

If the Red Sox decide to pursue a free agent on a shorter deal, switch-hittersKendrys Morales andCarlos Beltran are potential options. The Red Sox reportedly inquired about Beltran at the trade deadline in July, before the New York Yankees dealt him to the Texas Rangers. Beltran, 39, hit .295 with 29 homers and an .850 OPS in 151 games with the Yankees and Rangers in 2016.

Dombrowski mentioned Yoan Moncada, Sam Travis and Rafael Devers as prospects who might not be far from having an impact with the big league club.

Moncada, 21, is ranked among the elite prospects in baseball. He posted a .918 OPS in two minor league stops to earn a September call-up to Boston. But Dombrowski expects him to return to the minors to begin the 2017 season.

"In July, we would have said we thought he would be ready for the big leagues this year," Dombrowski said of Moncada. "We still love his abilities, but we all saw the same thing as far as the exposure to a steady diet of off-speed pitches and breaking balls and changeups. I think he would be able to play third base well enough with a month of spring training, and he does have versatility. But right now, his bat probably needs some seasoning at the minor league level.