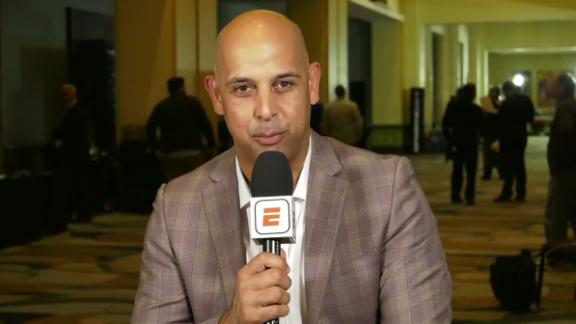 LAKE BUENA VISTA, Fla. -- As Giancarlo Stanton pulled on an extra-large set of New York Yankeespinstripes for the first time Monday, officials from the Boston Red Sox were still searching for ways to fill the Stanton-sized hole in the middle of their lineup.

Even Dave Dombrowski admitted that the optics weren't great.

"It didn't make my day that [Stanton] went to the Yankees, by any means," the Red Sox president of baseball operations said as the winter meetings began in the shadow of Walt Disney World. "He's a heckuva player."

Dombrowski disputed a characterization made by Stanton's agent that the Red Sox "never had any interest" in the recently crowned National League MVP. Dombrowski said he met with Miami Marlins president of baseball operations Michael Hill last month and spoke to him as recently as last week, after Stanton vetoed trades to the San Francisco Giants and St. Louis Cardinals.

The Red Sox, after all, have a profound need for power after finishing last in the American League in home runs for the first time since 1993, and Stanton is baseball's pre-eminent slugger, as he walloped 59 homers this past season for the Marlins.

How did Stanton wind up with the Yankees, who went deep more often than any other team in the majors in 2017, came within one win of reaching the World Series and represent the biggest obstacle to the Red Sox's winning a third consecutive division title?

"Well, we were not on his immediate list," Dombrowski said, referring to the four teams (Yankees, Chicago Cubs, Los Angeles Dodgers and Houston Astros) to which Stanton would've accepted a trade. "We called at the end. We were not on his list, so [the Marlins] were going somewhere else. We did all our homework on Stanton."

Stanton's camp told a different story Monday. Asked if the Red Sox were a consideration, Stanton claimed that he "didn't really have a thought on it." Agent Joel Wolfe said the Marlins never asked if Stanton would go to Boston because the Red Sox didn't come close to making a trade. Neither the Giants nor the Cardinals were among Stanton's preferred destinations, but that didn't stop them from working out a deal for him.

According to Wolfe, the Red Sox told teams during the general managers' meetings last month that they were looking for pitching. Dombrowski didn't recall any such thing. If anything, he said he inquired about Stanton at the GM meetings and found the Marlins' initial asking price to be too high, given the $295 million left on Stanton's contract.

Although Wolfe noted that the Red Sox are satisfied with their young outfield of Andrew Benintendi, Jackie Bradley Jr. and Mookie Betts, Stanton could have fit for them as a designated hitter.

As a result, while Stanton modeled a No. 27 Yankees jersey and held court for reporters, the Red Sox continued to pound the pavement in search of the elusive middle-of-the-order slugger they haven't had since David Ortiz retired after the 2016 playoffs. Dombrowski said the Red Sox are open to both free agents and trades, though given that they have not yet simply written a check to J.D. Martinez, the latter appears to remain their preference.

According to a source, the Sox have expressed interest in Kyle Schwarber, who is unlikely to be dealt by the Chicago Cubs. The Oakland A's don't want to trade Khris Davis after freeing up the DH spot for him by dealing Ryon Healy. Milwaukee Brewers general manager David Stearns said he has been taking calls on 30-homer outfielder Domingo Santanabut is "gong to expect a sizable return" for a player who is under club control for four more seasons.

"There are people out there," Dombrowski said coyly about the possibility of trading for a slugger.

Martinez, an outfielder who would fit into the Red Sox's lineup as a DH, remains the top power hitter in a slow-to-develop free-agent market that Dombrowski guessed could drag into January. First baseman Eric Hosmer isn't a pure power hitter, though his defense and leadership qualities could make him the most well-rounded player on the market.

Dombrowski said reports that the Red Sox have made Bradley available in trades are "false." He also said the Sox are in the market for only one hitter, rather than trying to double up with, say, Martinez and a second-tier free agent such as first basemen Carlos Santana or Logan Morrison.

"I don't know where we'd play these two bats. I'm trying to figure that one out," Dombrowski said. "But I would say we'd be more limited to probably one bat."

Dombrowski said pitcher Steven Wright's arrest Friday night on charges related to domestic assault won't increase the Red Sox's need to add a starting pitcher. Major League Baseball has begun an investigation into the matter. There is precedent for a suspension, with Yankees closer Aroldis Chapman missing 30 games in 2016 and catcher Derek Norris receiving a one-month ban at the end of the 2017 season.