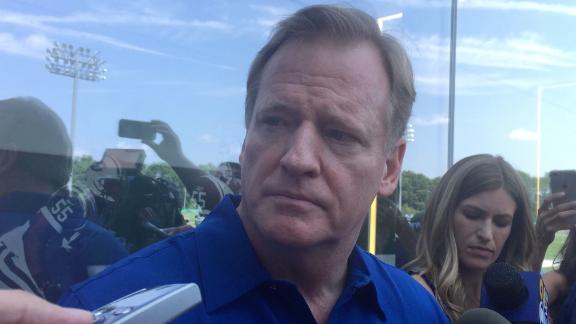 "I don't think any team tanks, I really don't," Goodell said Monday on a visit to the New York Jets' training camp.

The Jets, who parted ways with 11 veteran players during the offseason, have been accused of sacrificing the season for a high draft pick in 2018. With so many young players on the roster and an unsettled quarterback situation, they're predicted to be one of the worst teams in the league.

Goodell, however, took umbrage with the idea that a team would deliberately lose games to enhance its draft position.

"I think teams, depending on where you are, go through transitions," said Goodell, who earlier conducted a fan forum with about 150 season-ticket holders. "They are looking to sort of say, 'We need to build more talent here, we'll do it through the draft. Let's let some of our veteran players go and develop some of our younger players.'

The Jets haven't made the playoffs since 2010, and now they could have eight first- or-second year players in their starting lineup. Many observers believe they're trying to position themselves for a blue-chip quarterback in the 2018 draft.

"I don't think we're different than any team in the NFL," he said. "Every team goes into training camp trying to make the playoffs. We're no different in that sense."

Asked if the playoffs are a realistic goal, Maccagnan said, "I'm not going to put any limitations on what we can and can't do."

Several players have spoken out in recent days, saying the low outside expectations have provided fuel. Maccagnan agreed with that sentiment.

"To a certain extent, it's motivation," he said. "It might be a little chip on the shoulder for some people."