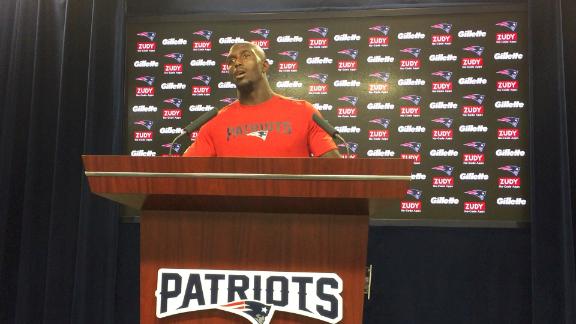 ESPN
By Jordan Raanan
EAST RUTHERFORD, N.J. -- Commissioner Roger Goodell, several prominent NFL owners and a handful of players were among the 20 to 30 people at a meeting Tuesday night in New York to discuss players kneeling during the national anthem and other relevant subjects facing the league.

The meeting focused on what the league was going to do moving forward and how to approach player protests, according to New York Giants linebacker and defensive captain Jonathan Casillas, who attended the gathering in Manhattan.

It came after a weekend in which players knelt or locked arms -- some didn't even come out of the locker room -- during the anthem. The strong display was in large part a response toPresident Donald Trump's recent commentsabout the league and players who didn't stand for the anthem.

"You got to see opinions from the owners and from the players as well," Casillas said. "Stuff like that is very good, very proactive. Thank Trump for saying what he said because without him saying that, (1) the whole league wouldn't have been so collectively together, (2) we would've never had a meeting."

Colin Kaepernick began kneeling during the anthem last season, when he was the starting quarterback for the San Francisco 49ers, as a way to protest social injustice. The number of players who kneel during the anthem has steadily grown this season.

"It was a very unique opportunity, obviously for the players. But I think [for] both sides. It rarely ever happens," Devin McCourty said. "To me, it was great to take away perspective to see both sides. I thought it was cool just to be open -- they were very open, we were very open with the feelings and how everything kind of went down, and how we felt as players.

"I think it was just a great situation and opportunity that we could all sit there and just talk, and throw everything out there. I think both sides got to walk away with an understanding of how each other felt."

McCourty said it wasn't a negotiation, but "a big dialogue," which was "what a lot of guys have been trying to start."

Casillas considered the two-hour session productive. He said there were no concrete decisions made. Instead, he said, it was an opportunity to exchange opinions in an open-table format.

NFL spokesman Brian McCarthy said the gathering was one of many conversations this week within the league.

"The commissioner believed with all the owners here for committee meetings it was important to bring in some players and hear directly from them," McCarthy said in responding to an email from The Associated Press. "While the conversations will remain private, they were very informative and instructive."

Casillas came away with the impression that the kneeling might not be ideal and that the community service and civic engagement of many NFL players should instead be the focus.

"I know the owners for sure don't want us kneeling," Casillas said. " ... It's what the message is getting across. People have been totally misconstruing the kneeling thing, from the beginning, from when Kaepernick did it in the beginning. Everyone is talking about the players disrespecting the flag. It's never been written and it's never been said anything about kneeling down is disrespecting the flag."

Asked if he came away with the feeling that owners had the players' backs, Devin McCourty said: "Yeah, I think players kind of saw that when owners came out with different statements Sunday.

"I think the biggest thing, as players, that we have to keep in the forefront [is] the inequality and injustice. I think that's what is important. We have to make sure this whole thing doesn't turn into the NFL vs. Donald Trump. He is whatever he is. You can probably have an hour of trying to describe that and everything he is. But I think as players, we have an agenda of what we think can be done better, and we're trying to use our platform. I think we have to stick to that."

Casillas was not one of three Giants players who knelt during the anthem before last Sunday's game against the Philadelphia Eagles. The entire team locked arms, but Landon Collins, Damon Harrison and Olivier Vernon were the first Giants players to kneel.

The Giants play this Sunday afternoon at Tampa Bay.Collins said he and the team haven't decided how they will handle this week -- but a group of team leaders met with Mara on Wednesday evening.

"We discussed moving forward about the whole kneeling situation and basically John Mara told us -- and I was sitting next to him side-by-side at Tuesday's meeting, so I knew where he was coming from -- and he basically said he can't ask us to do anything, really," Casillas said. "He just requests that we stand. If he had any request, that would be a request of his. But if anyone here, if anyone in the locker room, feels like they want to kneel or feel that they have to kneel, he would be supportive of anybody that decides to do that."

Collins added that the Giants probably will decide how to approach this week at their Saturday evening meeting.

"We haven't decided yet," Collins said. "He asked us not to take a knee, but if you feel like you need to, if you want to, he's still going to back us up. That's a plus, but we're going to figure out as a team how to do it each and every week."

ESPN's Mike Reiss and The Associated Press contributed to this report.