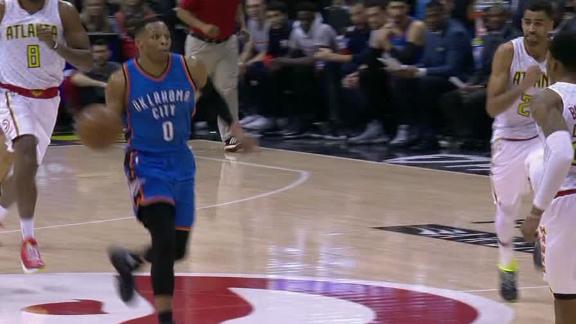 Westbrook, who started just 1-of-8 from the floor, finished with 32 points on 10-of-22 shooting, plus 13 rebounds and 12 assists to record his 11th triple-double of the season.

"I get satisfaction in winning," Westbrook said. "That's the most important part to me. My guys do an amazing job of working on their games and making my job easy, and my job's to be able to find those guys."

Westbrook recorded this triple midway through the third quarter, setting up Victor Oladipo for an and-1 layup. Of Westbrook's 48 career triple-doubles, Monday marked the 19th time he completed the feat before the end of the third quarter. That's the most three-quarter triple-doubles in the NBA since the start of Westbrook's career, with James Harden and Steph Curry tied for second with four.

Westbrook's triple-double pulls him within one of Michael Jordan's seven-game streak, the longest since 1989. He'll have a chance to match it on Friday as the Thunder host the Houston Rockets. Wilt Chamberlain holds the record with nine straight in 1967-68.

"I just hope he keeps doing it, man. It's unbelievable," Thunder guard Anthony Morrow said. "He's getting [the numbers] within the game. It's not like he's forcing it. It's something I've never seen before. It's a blessing for all of us to be a part of that type of greatness. He's doing it for the team. He's leading us. We're just following him."

The Thunder led by as many as 15 in the second half, but the Hawks made a push, narrowing the gap. Westbrook scored 11 of his 32 in the fourth quarter, including the Thunder's final nine points to close the game. As he stepped to the line for a free throw after an and-1 late in the fourth, MVP chants rung out throughout Philips Arena.

"That's crazy, right?" Westbrook said. "It definitely caught me off guard, but I just played, man, and continued to play. Especially on the road."

This is the latest a player has gone into a season averaging a triple-double since Oscar Robertson in 1963-64, and Westbrook continued his torrid pace with another full stat line to round out at 31.0 points, 10.9 rebounds and 11.3 assists through 22 games. That's a triple-double in half of his games this season -- the same amount the rest of the NBA has combined.

"You could see it in the summertime," Morrow said. "He never backs down from a challenge. I think where some people may have seen this as a tough situation for him with all those guys leaving ... he trusted in us and definitely trusted in himself, and you see what he's doing. He's leading us and doing a great job."