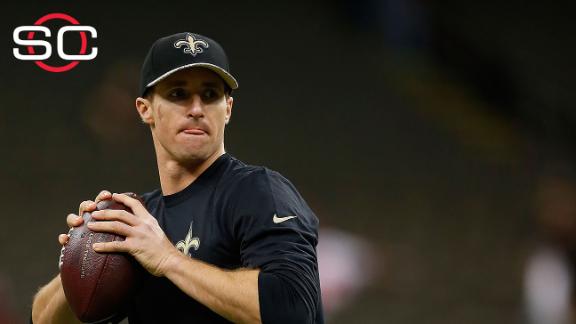 "We care so much about Purdue University," Brees said of their shared alma mater in a press release. "Purdue has meant so much to me, and it has provided so many things. From the education I received and playing for coach Joe Tiller, to winning a Big Ten championship and going to the Rose Bowl, to the relationships I was able to form with many of my teammates and meeting my beautiful wife ... we are so blessed and so thankful.

"We just want to show how much we believe in our university, in our football program, in our leadership and in the direction we are heading."

He and Brittany donated $2 million to the school in 2007.

The latest donation is part of the "Purdue Football Master Plan," intended to create a championship-caliber program. Brees and other former players took part in a recent three-day summit to discuss what enhancements could be part of those efforts.

Athletics director Morgan Burke said the gift not only demonstrates the generosity of Drew and Brittany but also "affirms that someone who has 'been there, done that' both at Purdue and in the National Football League believes in what we are doing it and wants to be a part of it."

"I am so proud to be a Boilermaker," Brees said. "Every chance I get, I try to tell somebody about Purdue and my experience, whether it's athletic, academic or just being a student. It was such a tremendous part of my life."

Drew and Brittany have raised millions in various charitable efforts through their Brees Dream Foundation. According to Purdue's press release, the foundation has contributed more than $22 million since its inception in 2003.