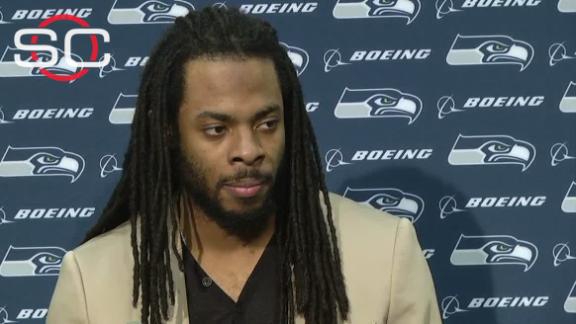 CHARLOTTE -- Even though the Seattle Seahawks failed in their bid to become the first team in the salary-cap era to reach three consecutive Super Bowls, they believe they're built for another run in the 2016 season.

"We're far from done," cornerback Richard Sherman said Sunday after his team's31-24 loss to the Carolina Panthers in an NFC divisional playoff game at Bank of America Stadium. "Guys are just entering the prime of their careers. We can be special for a long time."

Sherman's words echoed the sentiment in the Seattle locker room. No one called it the end of an era -- just the end of a season.

Instead of gloom and doom, several players spoke optimistically about the future and pointed to an almost miraculous comeback as a sign of the team's character. After an embarrassing first half, the Seahawks scored 24 unanswered points and pushed the Panthers to the 60th minute before the outcome was decided on an onside kick.

"It's been a lot of fun, a joy ride," said Russell Wilson, who rallied from an abysmal first half with three touchdown passes. "Honestly, [it was] my most fun year, just because of the leadership on the team and the fact that the overcomers we have are pretty special."

Most of the Seahawks' top players are under 30 and under contract for 2016, including Wilson, who is only 27.

"I think people get confused sometimes and think our quarterback is 38," Sherman said. "He's 26 or 27, not 38. Bobby Wagner is 25. We've got a young core. I think people have been astounded by what we've been able to do with our young core."

They didn't do much in the first half, when they fell behind 31-0. It was 14-0 after a Wilson interception was returned for a touchdown by Luke Kuechlyless than four minutes into the game. "We made a mess of it in the first half," coach Pete Carroll said.

Carroll said the game was "a microcosm of our season" -- lousy start, strong finish. Coming off last year's devastating loss in the Super Bowl, the Seahawks began 2-4 before rallying to a 10-6 record. They went 7-1 without workhorse Marshawn Lynch, who returned Sunday from abdominal surgery.

Carroll said he had no doubt the team would make it a game after a nightmarish first half Sunday. He made no excuses for the awful start but instead chose to praise his team's resilience.

"I kept saying to guys, 'It's going to be the greatest comeback of all time,'" Wilson said.

In the end, Seattle's Super Bowl-or-bust mission came up two wins short. Asked if the season was a success, wide receiver Doug Baldwin said, "'Success' wouldn't be a word I would use. We're not playing for a Lombardi Trophy, so it's not a success to that degree."

Sherman: 'I think people get confused, like our QB is 38'
Seahawks CB Richard Sherman expresses optimism for his team's future, saying "We're far from done."

Seahawks' players have mixed emotions after loss
Seahawks defensive players Earl Thomas III, K.J. Wright, Michael Bennett and Bobby Wagner all share their thoughts about their NFC Divisional Round loss to the Panthers and their season overall.