Seahawks 'playing for each other' 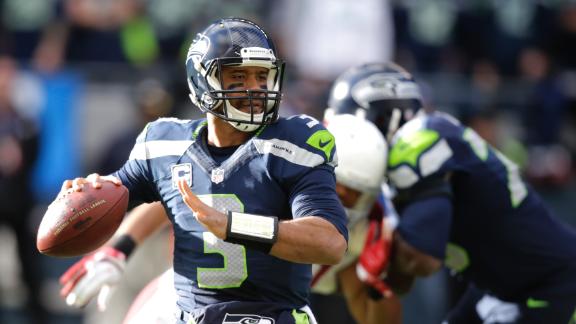 SEATTLE --Doug Baldwin thought it was time to talk it out. The Seattle Seahawks receiver said his team needed to get back to who it was -- not physically, but mentally. So they had a team meeting a couple days ago.

Apparently, it helped, as the Seahawks defeated the NFC West-leading Arizona Cardinals 19-3 Sunday at CenturyLink Field.

"There was something that was missing, a subtle difference," Baldwin said after the game. "Today we found it. It's about trusting each other and respecting each other. It was a feeling for each of us that we needed to get back."

"We've been talking," said Wilson, who was 17-of-22 passing Sunday for 211 yards and one touchdown. "We had kind of a team meeting, and we were just talking about getting our swagger back. We felt like it kind of went away for a little bit, for whatever reason, but I feel like we got it back."

The Seahawks have weathered some distractions this season, starting with the surprising Percy Harvin trade on Oct. 17 that brought about reports of problems among players in the locker room.

Earlier this week, Lynch was fined $100,000 by the NFL for failing to talk to reporters. It's a point Sherman brought up after the game when he gave short responses to questions and cut off an interview session.

"That's what happens when Marshawn gets fined," he said.

On Friday, Seahawks coach Pete Carroll tersely denied earlier reports that the Seahawks wanted to move on without Lynch next season.

Backup safety DeShawn Shead, who had a blocked punt Sunday, said this week's meeting came at the right time.

"We learned something this week about really playing for each other and believing in everybody,'' Carroll said. "We turned our focus to trusting one another. I think there was a really strong mentality for us in this game. I'm hoping it helps us reconnect with something we were looking for."

Baldwin said he senses a turnaround in the team's attitude.

"I definitely felt it today,'' Baldwin said. "It's about playing for each other and loving our brothers."

Seahawks Snap Cardinals' Streak
The Cardinals' six-game winning streak came to end with a 19-3 loss to the Seahawks.