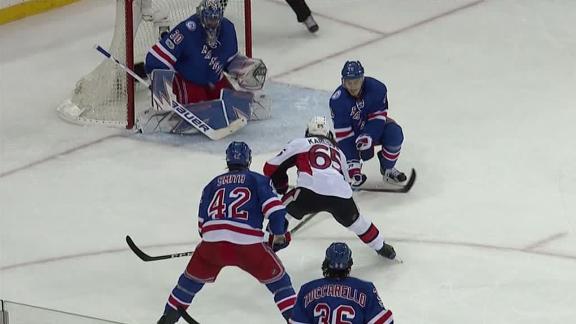 NEW YORK -- The Ottawa Senators have advanced to the Eastern Conference finals, and the New York Rangers will have a particularly hard time getting over this defeat.

The Senators finished this series off with a 4-2 victory in Game 6 at Madison Square Garden on Tuesday. But it was the Rangers' inability to finish in Games 2 and 5 in Ottawa that will haunt them in the weeks and months to come. New York blew late-third-period leads in both games and then lost in overtime. If not for that, the series wouldn't have even gotten back to MSG.

How it happened: For the first time in the series, Ottawa struck first, less than five minutes in, courtesy of Mike Hoffman. That took some of the life out of the sold-out Garden crowd, and when Mark Stone made it 2-0 toward the end of the first period, the crowd was muted again.

The Rangers got back in the game when Mika Zibanejad scored at 13:32 of the second period. The home fans erupted, and two minutes of sustained pressure on Ottawa goaltender Craig Anderson followed. But Senators captain Erik Karlsson snuffed out the fire with a stunning end-to-end rush that produced a give-and-go goal at the 15:53 mark.

Chris Kreider's goal less than a minute into the third period made it 3-2 and injected life in the building once more, making for a tense final 20 minutes. The Rangers had the first eight shots of the period, and 15 total in the third, but they couldn't find an equalizer. The Senators' Jean-Gabriel Pageau ended the proceedings with an empty-net goal in the final seconds.

Controversy: The result of Game 6 was a fair one -- the Senators were dialed in, winning nearly 60 percent of the faceoffs and blocking 20 shots, including nine in the first period alone. The questions regarding this series will center on how such an experienced Rangers team could cough up those late leads in Ottawa.

What's next: The Senators will face the winner of Wednesday night's second-round Game 7 between the Washington Capitals and Pittsburgh Penguins in what will be the third conference finals appearance in franchise history and first since 2007.