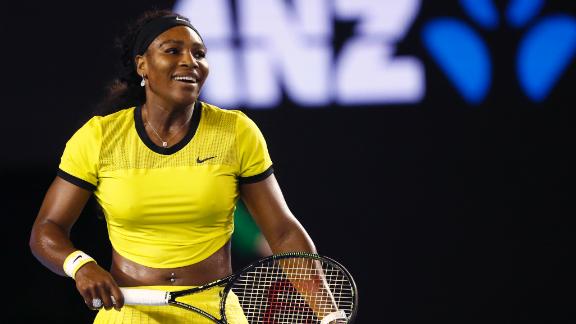 MELBOURNE, Australia -- For a few moments anyway, it seemed as if the ghost of Roberta Vinci had entered Melbourne Park.

After winning the first six games of her semifinal match against No. 4 Agnieszka Radwanska, Serena Williams began to show signs of tightness. Her groundstrokes lost some juice, and her feet moved with considerably more resistance.

Williams eventually collected herself, winning 6-0, 6-4 on Thursday to reach the Australian Open final for the seventh time.

"I was really trying to get off to a fast start," Williams said. "Every single time, you know, I would just start out down. I just really wanted to focus on when I first walk out there to be ready to go from the first point, then that way I don't necessarily have to play from behind, which I can do clearly, and I proved that last year, but I wanted to prove that I can play also ahead this year."

Early on, the only question was whether Williams, the world No. 1, would become the first player since Chris Evert in the 1984 French Open to double-bagel an opponent in a Grand Slam semifinal. But after a one-sided start, Radwanska regrouped, winning the first game of the second set and then breaking Williams three games later.

Radwanska, from Krakow, Poland, absorbed Williams' power, keeping points long and hitting the ball deep. At one point, they engaged in a sensational 15-point rally that ended with a perfectly executed and bold drop shot.

But Williams, 34, held off her opponent's charge. At 4-4, Radwanska airmailed a forehand long at break point, giving Williams a lead she would not relinquish. In the final game, Williams scorched three aces in a row and ended the match with a forehand winner she took out of the air.

"For sure I thought it was going to be a really rough part [of the season]," Williams said. "I mean, I never thought I was going to go out and lose in the first round, but at the same time, I never thought before, I'm going to make it to the final or anything. I was just playing literally a point at a time."

Next up for Williams is a date with No. 7 Angelique Kerberof Germany and a shot at matching Steffi Graf's Open era record of 22 Grand Slam titles. Kerber defeated surprise semifinalist Johanna Konta 7-5, 6-2.

Kerber, the seventh seed, became the last current top-10 player to reach a major final. After a tough opening frame against Konta, she pulled away with her flat, overpowering groundstrokes. The key stat in this one: Konta, the 47th-ranked player, donated a healthy 36 unforced errors, 25 more than Kerber.

Kerber is fortunate to be here. In her opener here two weeks ago, she was down match point against Misaki Doi.

"I mean, of course it's a special moment to reach the finals for the first time," Kerber said in her on-court interview. "I was just trying to give everything today on court. Johanna had a great two weeks, and she will have a great future."

Under the roof of Rod Laver Arena, Williams leveraged her massive serve against Radwanska, losing just three points on her first serve and converting 22 of 25 points at net.

Ultimately too powerful from all areas of the court, Williams improved her record against Radwanska to 9-0, but later extolled her opponent's performance.

"She started playing really well in [the] second set, making great shots and hitting deep," Williams said. "Just said to myself, 'I need to figure something out,' and I started playing aggressive like I had all week."

Before the tournament began, Williams, a six-time Aussie Open champ, insisted her disappointing effort at last year's US Open semifinals, where she was stunned by the unranked Vinci, would not carry over into the new season. However, one week into 2016, Williams pulled out of the Hopman Cup with knee inflammation, raising even more questions.

But those questions were answered fast. For the first time in her career, Williams reached the final of the Australian Open without losing a set. Moreover, only one player has taken Williams to five games in a set, and that came in her very first match of the tournament, against Camila Giorgi.

Now it's on to Kerber.

Williams warned the media not to underestimate Kerber, noting she will be the first lefty Williams will have faced in this tournament.

"She took out a really tough opponent inVictoria [Azarenka]," Williams said. "She's beaten me before, too, and pretty good. I know that she brings a lot, you know, to the game."

That one loss to Kerber came in the quarterfinals of the Western & Southern Open four years ago, but since then, Williams has reeled off four straight victories. Overall, Kerber is 1-5 against Williams.

So, for the first time in 20 years, a German will contest in the final of the Australian Open.

"Yes, a great week for German tennis to reach the first Grand Slam final of the year," Kerber said. "I have a lot of support from Germany and around the world."

Still, Kerber concedes she will be a heavy underdog when she meets Williams on Saturday night.

"Yeah, I'm looking forward to playing Serena in the final," Kerber said. "It's amazing to play against the No. 1. I must play my best tennis to have a chance. But I have nothing to lose. So I will try to enjoy the final."