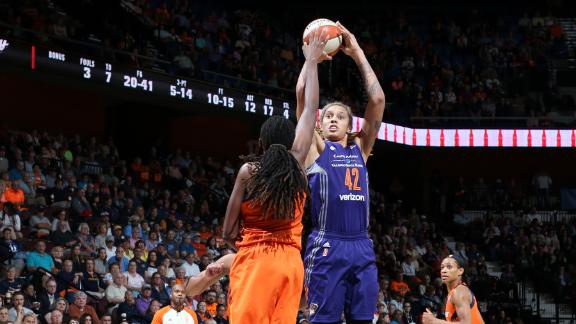 The WNBA hyped its amended playoff format, first implemented last year, with the idea that it mixed the excitement of the NCAA tournament (single elimination for first two rounds) with the longer test of pro basketball (best-of-five series for the semis and final).

Sunday indeed felt a lot like March Madness -- the upset version. The lower seeds both won on the road, and the WNBA semifinal matchups we will see Tuesday likely are not the ones we were expecting.

It will be No. 1 seed Minnesota versus No. 6 Washington, and No. 2 Los Angeles against No. 5 Phoenix.

No. 3 seed New York and No. 4 seed Connecticut would be thrilled now if they were hopping on planes to head west. Instead, they're left to stew on the tenuous nature of winner-take-all games.

First, Phoenix rallied from as many as 17 points down to defeat Connecticut 88-83. This was an upset, but not a stunner. The Mercury have greater playoff experience, led by Diana Taurasi and Brittney Griner, who both had big games.

Not many saw the second upset coming, though. (Except maybe those longtime Liberty fans who've had their hearts broken a few too many times and tend to fear the worst.) Washington snapped New York's 10-game winning streak. For the third year in a row, the Liberty ended their season at Madison Square Garden, making it sting all the worse.

In 2015, New York fell in the third game of the Eastern Conference finals, when Tamika Catchings and Indiana beat New York to win that series. Last year, Taurasi and Griner led the Mercury to a second-round victory over the Liberty.

Sunday, it was "Fear the Turtle" time as Maryland grad Kristi Toliver -- she of one of the most famous 3-pointers in NCAA women's history -- lit up the Liberty like the Christmas tree at Rockefeller Center.

Toliver made 9 of 16 3-pointers, which stretched the Liberty's vaunted defense until it tore apart. Toliver finished with 32 points, while Elena Delle Donne had 18.

Toliver won the NCAA title with Maryland in 2006 -- her famed 3-pointer sent the final versus Duke into overtime, and sent Toliver into NCAA tournament immortality -- but she didn't get her first WNBA title until last year with Los Angeles.

Then, as a free agent, the Virginia native had a chance to come back "home" to play for the Mystics. She had some ups and downs this season, as did the injury-riddled Mystics. But Sunday, they put it all together.

You could say the same for the Mercury, who were without Griner for a monthlong stretch in July/August after she injured her knee and ankle. The Mercury also remade their roster around Griner and Taurasi this season. Back in May, Camille Little -- in her first year with Phoenix -- talked about the chance to finally play with those two after facing them so many times.

"I love Diana's drive to win, because I'm the same way," said Little, who came to Phoenix via trade from Connecticut. "She's so smart, her IQ is so high. It's fun to be able to finally be on the court with her, because everyone knows what she can do.

"And same with [Brittney Griner]. I really just want to complement them, and bring whatever tenacity I can offensively and defensively. Just be a role player who does whatever is needed."

Four months later, that's just what we saw from Little and the rest of the Mercury's supporting cast. Griner (26 points, nine rebounds) and Taurasi (23 points, four assists) were the stars. But Little, Monique Currie, Leilani Mitchell and Yvonne Turner all did their jobs, too.

As mentioned, this was the second year in a row the Mercury traveled east for a second-round game and won in an upset. They did it to New York last year with Taurasi and Griner having very big games, too. But back then it was Penny Taylor, Candice Dupree and DeWanna Bonner providing expert support.

Then Taylor retired, Dupree was traded to Indiana and Bonner sat out the season as she gave birth to twins this summer.

So coach Sandy Brondello's Mercury had a very different cast around Taurasi and Griner. They were familiar with Mitchell, the diminutive point guard known for hitting big 3-pointers, and Currie, a 12-year veteran who has averaged 10.7 PPG for her career, because those two had spent the 2015 season in Phoenix.

Turner, though, was a free-agent signee who at age 29 had not previously played in the WNBA, getting looks at training camps in Chicago and San Antonio in past years, but not catching on. The former Nebraska standout kept improving her game overseas, though, and brought an energy and hunger Brondello thought would help Phoenix.

She finished with 11 points Sunday; Currie and Mitchell each scored 12. The Mercury were able to withstand Connecticut's first-quarter success, and then make a few adjustments to play progressively better as the game went on. Then three consecutive 3-pointers in the fourth quarter -- first from Mitchell, then Taurasi, then Currie, starting with 3:35 left -- turned the tide in Phoenix's favor.

For Connecticut and New York, these losses are very painful. Before this season started, the Sun weren't expected by most observers to even make the playoffs, let alone be in the top four. But with a breakout season by Jonquel Jones, they really brought a buzz back to the organization and the fan base.

Jones was the league's Most Improved Player, and Curt Miller was Coach of the Year. A 21-13 record -- especially without past No. 1 pick Chiney Ogwumike, who was injured and out for this season -- is something to be proud about. But it might take the Sun awhile to feel that way after Sunday's defeat.

For the Liberty, the disappointment is even more profound. They're a veteran team that has been through this misery before. Especially considering how well they were playing to end the regular season, this was not at all how they expected to end 2017.

There will be discussion, again, about whether this playoff format is really "fair." A lot of WNBA observers don't mind the first round as single elimination, but would like to see the second round be a best-of-three series.

But it was winner-take-all on Sunday. And the underdogs took all.