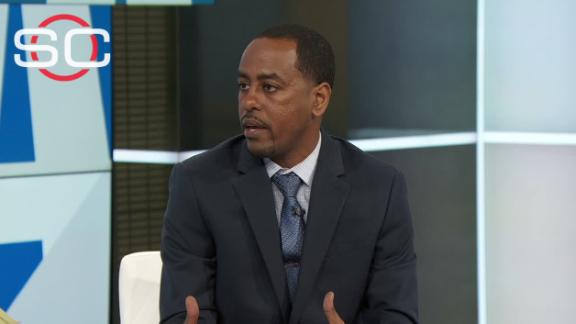 Free agent Luol Deng has agreed to a four-year deal with the Los Angeles Lakers that is worth $72 million, a source confirmed to ESPN's Chris Broussard on Saturday.

The agreement was first reported by The Vertical.

After struggling to find consistency and a comfortable role through much of his two seasons in Miami, Deng blossomed when he shifted from small forward to power forward with All-Star Chris Bosh lost in February for the second time to treat blood clots.

Deng, 31, averaged 15.2 points, 8.1 rebounds, 2.5 assists and 1.2 steals in 28 games after the All-Star break, when he shot 48.4 percent from the field in 31.4 minutes. Deng's versatility on both ends of the court was vital in the Heat's transition to an up-tempo pace over the second half of the season and fueled their push to the second round of the playoffs.

"He was getting more space and room to run and cut and be himself," Heat president Pat Riley said of Deng, a 12-year veteran who spent his first nine seasons with Chicago. "He's a great leader. We love him. He's a high-character guy. I consider him one of our core people."

The Lakers also have agreed to deals with Jordan Clarkson (four years, $50 million) and center Timofey Mozgov (four years, $64 million) and have made qualifying offers to Tarik Black and Marcelo Huertas. The deal cannot be signed until July 7.

Deng earned $10.1 million last season in the final year of a two-year deal in Miami. But with limited salary-cap space and retaining Dwyane Wadea clear priority after keepingHassan Whiteside, bringing back Deng appeared to be a huge challenge for the Heat entering free agency.

Information from ESPN's Michael Wallace was used in this report.

Lakers have coveted Deng for a while
Amin Elhassan says the Lakers got a nice coup in Luol Deng, who they have pursued for a while and he could be a good locker room presence for the younger players.
Related topics:
sportsespnluol dengfree agencymiami heatnbalos angeles lakers
Copyright © 2021 ESPN Internet Ventures. All rights reserved.
More Videos
From CNN Newsource affiliates
TOP STORIES