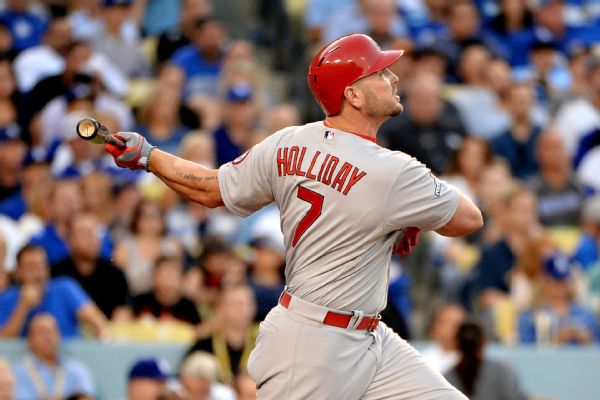 Holliday, who turns 37 next month, fits into the Yankees' strategy of signing veterans to short-term deals while pivoting toward a youth movement.

The Cardinals informed Holliday that they wouldn't pick up his $17 million option in late September, allowing the team and Holliday to plan his farewell on the team's final homestand of 2016. In what were supposed to be largely ceremonial at-bats, Holliday, still recovering from a broken right thumb, swatted a home run and had a key RBI single. He got a roaring ovation when manager Mike Matheny sent him out, alone, to left field and then immediately subbed him out on the final day of the regular season.

A seven-time All-Star, Holliday was viewed as lineup protection for Albert Pujols when he arrived in St. Louis in a trade from theOakland Athleticsduring the 2010 season. Then he became one of the few players to live up to a massive long-term contract. Over the course of the seven-year, $120 million extension Holliday signed going into the 2011 season, he batted .288 with an .863 OPS and 143 home runs.

Holliday figures to be primarily a designated hitter in a lineup where the projected outfield has Jacoby Ellsbury in center, Brett Gardner in left and 24-year-old Aaron Judge in right. Aaron Hicks and Tyler Austin are the backups.

Holliday, 6-foot-4 and 240 pounds, has never been the most graceful outfielder. He dropped a soft line drive in Game 2 of the 2009 National League Division Series against theLos Angeles Dodgers.Late in his stay in St. Louis, he began to play sporadically at first base.