Sources: Big 3 not acting in concert 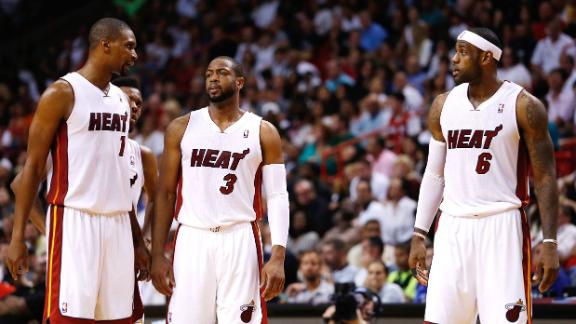 When the Miami Heat's "Big 3" went their separate ways after a lunch meeting last Wednesday, they went not knowing whether they had played their last game together, according to sources with knowledge of the situation.

While Dwyane Wade and Chris Bosh were committed to returning to the Heat, LeBron James was unsure of what he would do, the sources said.

The only certainty coming out of the meeting concerning James was that he wanted a maximum-level salary.

James did not ask or suggest that Wade and Bosh opt out of their deals or take lesser salaries to allow the Heat to add other top players, according to the sources.

When Bosh and Wade opted out of their contracts a few days later -- joining James who had done so before their lunch meeting -- it was widely assumed the three were working together and would all return to the Heat.

But sources who have spoken with two of the Big 3 said that was not the case. Bosh and Wade are intent on returning to Miami, but neither of them knows what James will do.

"It's not a done deal," said one source, when asked about James' return to Miami. "That's for sure."

Bosh and Wade were so uncertain about James's future after last week's meeting that one of them spoke about what the Heat might look like without James, according to one source.

The decisions of Bosh and Wade to opt out of the final two years and $42 million of their contracts were sparked by their desire to add better players in an effort to entice James to stay in Miami, one source said.

While both players expect to sign larger contracts overall, each is willing to take less money annually.

Bosh is looking to sign a five-year deal worth between $80 million and $90 million while Wade is thinking along the lines of $55 million-60 million over four years, sources said.

Those figures, combined with a max-level contract that would begin at $20.7 million for James, would not clear the cap room it would likely take to sign free-agent targets such as Luol Deng and possibly Pau Gasol.

Sources tell ESPN.com's Marc Stein that Miami is also attempting to secure the services of perimeter specialist Anthony Morrow, who spent last season with New Orleans, as part of its pursuit of multiple lower-cost options to reload its supporting cast around James, Wade and Bosh.

The Heat are locked in a battle for Morrow with Oklahoma City, sources said, but are trying to build a supporting cast that will help convince James to re-sign.

None of this means James will not return to the Heat, and another season or two for him in Miami seems to be a safe bet, the sources said. But no one, not even the other members of the Big 3, knows what the four-time MVP is going to do.

James's camp has handled this year's free agency much different than it did in 2010. James has hired a new agent since then in longtime friend Rich Paul, and Paul has played it close to the vest.

Paul spoke with clubs interested in signing James beginning at midnight on Tuesday. His responsibility is to share that information with James and then they will decide the next steps.

One similarity between 2014 and 2010 is that James was likewise noncommittal in a meeting with Bosh and Wade before the trio joined forces in Miami that summer.

Information from ESPN.com's Marc Stein contributed to this report.

Heat Waiting For LeBron
P.J. Carlesimo talks about which area Miami needs to improve, and Chris Broussard says the problem facing the Heat is their inability to make firm offers to free agents.