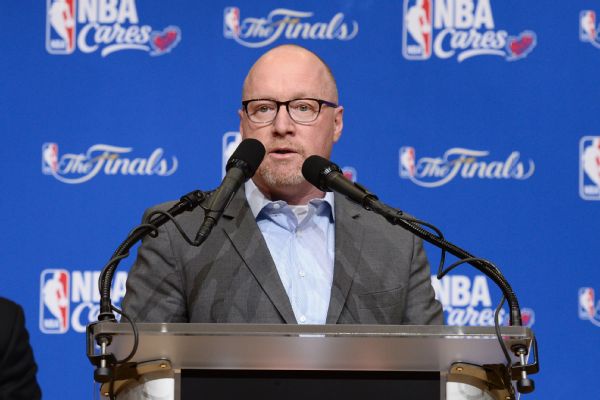 Griffin, the formerCleveland Cavaliers GM, traveled to New York on Friday for a dinner meeting with Knicks executive Steve Mills, with whom Griffin has continued to discuss the shaping of a potential Knicks partnership.

Griffin is also expected to meet with owner James Dolan in the near future, league sources said.

Mills made the decision to sign Atlanta Hawks guard Tim Hardaway Jr.to a four-year, $71 million contract, a move that has been met with shock inside and outside the organization. The Knicks have become a perennial lottery team, rife with organizational discord and dysfunction.

One potential stumbling block to the Knicks' pursuit of Griffin, league sources said: the willingness of the organization to allow Griffin to bring his own front office staff to Madison Square Garden.

Much of the Knicks' front office has survived several unsuccessful regimes, and the organization has been hesitant to make sweeping changes to the group, league sources said.

Griffin has a trusted inner circle of front-office and scouting personnel who played a part in building the Cavaliers' roster into one that went to three consecutive NBA Finals and won the 2016 championship. Griffin is one of the NBA's most connected and respected executives, and he might not agree to a scenario in which he must inherit a bulk of the front office, league sources said.

The Knicks want to make a commitment to going young, transforming the roster to players in the 25-and-younger range. New York says it wants to build around 7-foot-3 Kristaps Porzingis, and continues to say it wants to move 10-time All-Star Carmelo Anthony in a trade. Anthony is willing to waive his no-trade clause forHoustonand Cleveland now, league sources said, but there has yet to be a mechanism that allows those teams to give New York the young assets it wants for a trade.

Griffin spent three years as the Cavaliers' general manager, beginning in 2014, until his departure in late June. He was an assistant GM with the Cavaliers before then, going to Cleveland after rising from an intern to a top front-office executive over 17 years with the Phoenix Suns.
Report a correction or typo
Related topics:
sportsespndavid griffinsteve millsgmnew york knicksgeneral managernbajames dolan
Copyright © 2020 ESPN Internet Ventures. All rights reserved.
More Videos
From CNN Newsource affiliates
TOP STORIES