Stephen Strasburg exits early with tightness in side 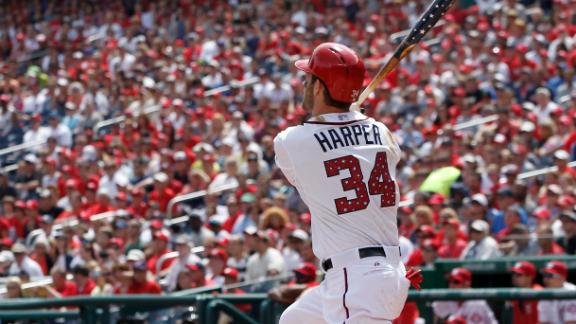 WASHINGTON -- Washington Nationals' pitcher Stephen Strasburg left Saturday's game against the San Francisco Giants in the fourth inning after experiencing tightness in his left side.

Strasburg allowed one hit over 3 2/3 scoreless innings in his third start since coming off the disabled list. He missed nearly four weeks due to neck tightness.

Staked to an early 3-0 lead, Strasburg winced and grabbed in the area of his left side after making an attempt at Buster Posey's groundball out.

"It's pretty tight," Strasburg said after Washington's 9-3 win. "Don't really have an explanation. Everything felt pretty good. I just threw a pitch to Posey there. He grounded out and I just felt it grab."

After a stoppage in the game and a lengthy conversation with Nationals manager Matt Williams and a team trainer, Strasburg walked off the mound and into the dugout.

"I wanted to at least get through the inning and see if we could do something about it," Strasburg said.

"We'll see how he feels tomorrow, but given how his season has gone so far we're not going to take a chance there," Williams said.

In his previous two starts since returning, Strasburg went 2-0 with a 1.50 ERA and 15 strikeouts. He dominated the Giants before leaving.

"He's been throwing well his past three outings he's had," teammate Bryce Harper said, who hit a two-run homer in the first inning. "I think going through those four innings he was carving."

Tanner Roark (4-3) earned the win after pitching 4 1/3 innings in relief of Strasburg.

"Thankfully we have a 15-game winner in the bullpen who can come and do what he did," Harper said of Roark.

Strasburg didn't know whether the new tightness was related to the previous injury or when he would pitch next.

"Everything happens for a reason," he said. "I'm just going to look at it that way. Try to stay positive and get back to help this team as soon as I can."

Strasburg exits, Harper's bat lifts Nats
Stephen Strasburg left in the fourth inning due to an injury, but Bryce Harper was able to provide enough offense to lead the Nationals to a 9-3 win over the Giants.