Tab's on us: Orlando bar giving away beer until UCF wins game 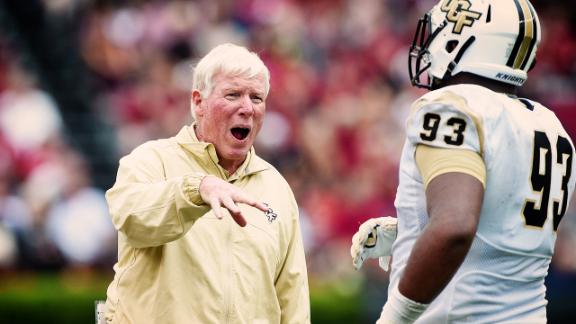 An Orlando, Florida, bar that used to be packed with UCF fans on football Saturdays has seen its business dwindle as theKnightshave gotten off to an uncharacteristic 0-4 start.

So the establishment, called The Basement, is getting the attention of the locals by announcing it will be giving beer away for free during the team's games until the Knights win.

"We have taken great pride in the team and we very much consider ourselves a UCF bar, as we're operated and staffed by graduates and even some current students," said Jake Whitacre, the bar's marketing director who graduated from the school in 2012.

The once stalwart UCF team, which played in the 2014 Fiesta Bowl, has lost twice this year in devastating manner. The team lost its season opener to FIU by one point when its field goal try was blocked and was stunned by Furman in a one-point loss two weeks later, as its kicker drilled a school-record 55-yarder.

Whitacre said the bar, which is located in downtown Orlando about 15 miles from campus, had roughly 50 people watching the team's loss to South Carolina this past weekend. The bar's capacity is about 150.

"We hate to see the place like this," Whitacre said.

The bar will start serving free beer, which will be an American lager like Coors Light and Yuengling, after the kickoff and will continue to serve until the final whistle is blown for each game until the team wins.

Whitacre said there has been so much buzz about the promotion, since the bar made the announcement on Monday, that the ownership is going to open up the nightclub above The Basement to accommodate an overflow crowd of up to 200 more people.

The hope for the bar, financially speaking, is to have the crowd pay for premium alcohol and food while cheering on the team, which plays 1-2 Tulane at noon this Saturday.

Whitacre says he hasn't heard from the school's athletic department, which probably is rooting harder for its team to win this weekend. If not, the student crowd, or at least the upperclassmen, could be spending the Oct. 10 home game versus Connecticut at the bar instead of being in the stands.

In 2011 and 2012, a Miami bar gained nationwide publicity by paying patrons who were in the bar during Heat games $25 every time they stayed for the game and the Heat lost. In the first year, the bar lost more than $97,000 in retail business from the promotion, but gained much more than that in publicity and attention.