UNIONDALE, N.Y. -- John Tavares stepped on the ice 18 seconds into Thursday night's game at Nassau Coliseum. For the first nine years of his NHL career, this would have elicited cheers from New York Islanders fans. Now, for the first time, Tavares was on Long Island wearing a Toronto Maple Leafs jersey, having left the Islanders for the Leafs as a free agent last summer.

So the fans booed Tavares, loudly and lengthily. They chanted "JT sucks!" and "We don't need you!" along with a few more anatomical phrases. Every time he was near the puck, they jeered.

"They always made it tough on the opponent when I played here," Tavares said after the 6-1 loss to the Islanders. "They have their feelings, and that's out of my control."

Before the game, the parking lot was filled with fans who had defaced their Tavares Islanders jerseys with nameplates that read "Traitor" and "Judas" and "Better Without You," and turned his No. 91 into images of snakes. They placed his jersey on the road where cars could run over it -- according to one Islanders fan, cars that missed the jersey on their first pass were instructed to drive over it again. They burned his shirts and jerseys in effigy in large oil drums.

During warm-ups, they chanted and booed Tavares. Signs papered the glass, disparaging him. One Islanders fan threw his Tavares jersey at the six-time All-Star as he left the ice for the Leafs' locker room.

It was quite a scene, but one that Tavares, a former Islanders captain, anticipated.

"I don't expect it to be a very welcoming return," he said before the game. "I'm just going to go out there and play the best I can and not worry about what I can't control."

Tavares was drafted first overall by the Islanders in 2009 and quickly became the face of the franchise. The next nine years were lean as far as team success -- Tavares played in only 24 playoff games -- but he scored 272 goals and had 349 assists in 669 games.

After maintaining that he wanted to remain with the Islanders in the months leading up to unrestricted free agency, Tavares decided to hear the pitches of several teams at his agents' offices. The Leafs had one that blew him away, and Tavares, an Ontario native, signed a seven-year, $77 million contract with his childhood team.

"I tried to be open and honest about my decision," Tavares said before the game.

The Islanders fans in attendance felt otherwise. With 10 minutes left in the first period, the team ran a 60-second video tribute to Tavares. The fans drowned it out with boos and "We don't need you!" chants, before their jeers reached a peak when "Thank You, John" appeared on the video boards.

Moments later, they chanted, "You're a liar."

Tavares said he watched the entire video on the scoreboard from the bench and appreciated it.

"The tribute was nice from the organization and the guys on the other bench," he added.

Toronto coach Mike Babcock called the energy from the home crowd "spectacular" and added: "You must be a real special player and a real special person for them to honor you like that, because they only boo you if you were important. For most of us they don't even know who you were.

"We wanted to come here and win for John, and we didn't get that done tonight." 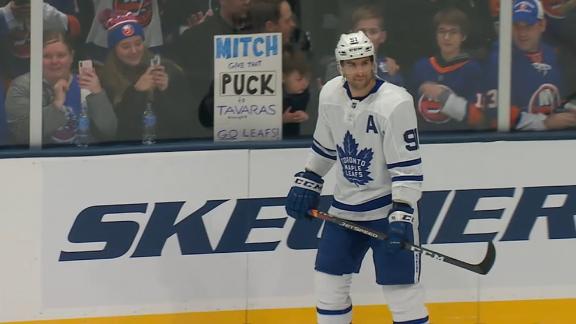