The AL East race could end this weekend 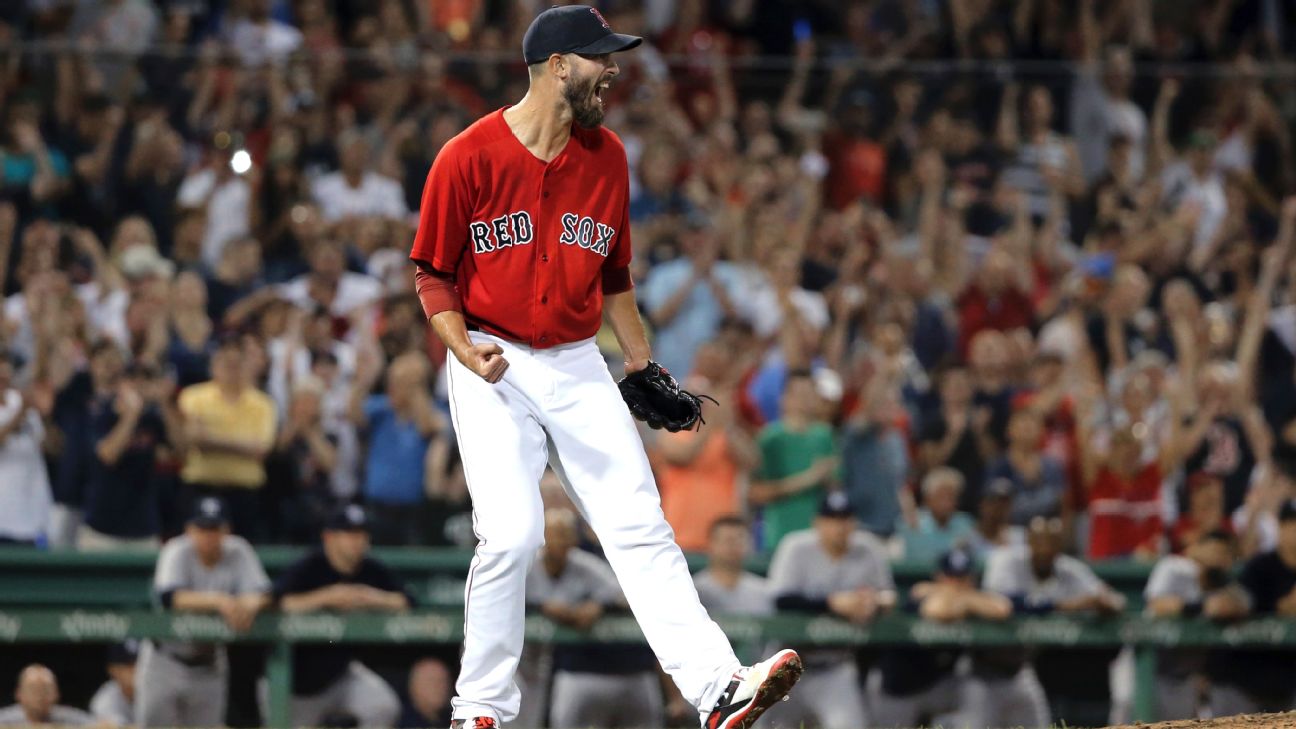 BOSTON -- A harsh reality is beginning to set in for the New York Yankees: This might not be their year to win the American League East.

As they continue to trudge through a second half that so far has been defined by mediocrity -- they are 6-8 since the All-Star break -- the odds of them winning the division and locking up a postseason spot that won't require a one-game playoff are looking slimmer and slimmer.

Completely outclassed by theBoston Red Soxin the first two games of this important four-game weekend set at Fenway Park, a pair of similar showings Saturday and Sunday could all but solidify a second-place AL East finish and a second straight wild-card berth.

With Boston now up by 7 games, a lot has to break the Bombers' way for that not to happen.

Only once has Boston blown a division lead this large and this late over the Yankees, according to Elias Sports Bureau research. That came 40 years ago, in 1978, when the teams finished in a tie for first place, with the Yankees winning the tiebreaker game at Fenway thanks to Bucky Dent's legendary homer over the Green Monster. New York went on to win the World Series.

"Look, I know we're not in the best situation. Obviously, we're in early August here. I understand all that," Boone said after the Yankees' 4-1 loss to the Red Sox on Friday night, in which they were one-hit by Boston starterRick Porcello. "I also understand all we can be is hyper-focused on where we're at. We're definitely going through a little tough stretch right now. We're being tested to a degree, which is ultimately going to happen in a big-league season."

The tests have included a reshuffling of the pitching staff, All-Star rookieGleyber Torressuffering through a spell of untimely mental miscues, and a stretch of poor performances from aceLuis Severino.

"It's raining. A couple things are going bad," said Severino, who has lost three straight and seen his ERA rise from 1.98 to 3.08 over the past month. "But it's going to stop raining sometime."

Of late, it seems storm clouds have followed the Yankees wherever they've gone.

When J.A. Happ, the left-hander the Yankees just acquired from Toronto, was diagnosed Tuesday with hand, foot and mouth disease, the pitching dominoes began to fall. Making matters worse: The diagnosis came at about the same time the coaching staff reached its wits' end with struggling starter Sonny Gray, who had arguably the worst outing of his dismal 2018 season Wednesday.

As Happ went down, Gray was sent to the bullpen. Lance Lynn, the most likely replacement for Happ, was burned in Gray's short outing, prompting New York to call Triple-A and send 23-year-old righty Chance Adams to the mound Saturday in his major league debut.

The stakes will be high. Adams will fill in for the injured Happ at a time when the Yankees are in must-win mode. He'll face former Yankees starterNathan Eovaldiand one of the most dangerous lineups in baseball -- a lineup that put up an 8-spot against the Bombers in the fourth inning Thursday, en route to a 15-7 win.

"We want to make it as normal for him as we can," Boone said. "Obviously, big league debut and tough going up against a great team. But we're not going to make it any bigger than it is. We want to get him here and get him as comfortable and into his routine, and hopefully go out there and give us a quality start."

If he doesn't, suddenly that division deficit could swell to 8 games, and the Yankees would be confronted with the possibility of a sweep -- and a mountainous 9-game Boston lead -- heading into Sunday Night Baseball, whenMasahiro Tanaka is scheduled to face off with David Price.

"I think it -- I know, it'll turn around," Boone said. "We're going to end up having a really great season. It's inevitable that you're going to hit a bump along the way."

The bumps have been far more frequent of late, but Boone says he believes his players will be better for it.

"When you got through a little bit of adversity, when you can pull yourself out of that, it makes you tougher in moments, in crisis, whatever comes up later in the season, hopefully when we're playing in some real meaningful games we'll be equipped to handle that," Boone said.

"But the bottom line is we're still in position here to potentially have a special season. We've got to right the ship a little bit here, we've got to play better. Everyone can do a little bit better. But it's important that those guys in there understand that this is a test. It's not always going to be easy."

It has been anything but easy. And the AL East clock is ticking.

Cora tossed after Betts buzzed by Severino
After Mookie Betts gets brushed back by Luis Severino's pitch and a warning is issued, Alex Cora gets heated with the umpires and is tossed.