The biggest thing since Michael Jordan? It's Tim Tebow time in the minor leagues 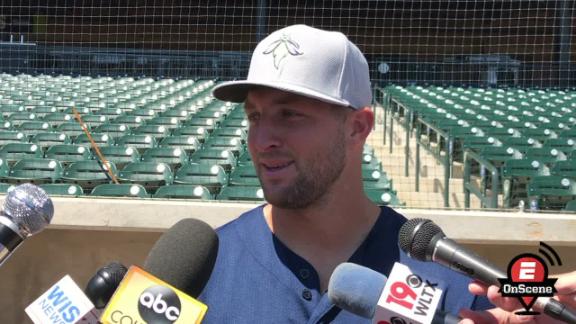 COLUMBIA, S.C. -- Just off Bull Street, surrounded by remnants of the South Carolina Lunatic Asylum that was built in 1822, is a grand year-old baseball stadium named Spirit Communications Park.

Several buildings on these 181 acres in the heart of the state capital are still standing, though windows are broken or boarded up. Others have been bulldozed, leaving piles of rubble that create a somewhat surreal, somewhat spooky scene as the sun sets.

It is here on Thursday night that former University of Florida star and NFL failure Tim Tebow will begin what he hopes is his journey to the major leagues as a member of the Class A Columbia Fireflies.

It is here that the 29-year-old Heisman Trophy quarterback-turned-outfielder is being questioned for doing what Michael Jordan did in 1993-94, when he pursued a baseball career between his six NBA titles.

It is here that TebowMania has begun only a few miles from the University of South Carolina campus that a few days ago was abuzz with Final Four fever.

It is here, in the South Atlantic League, that Tebow finds comfort in his decision to chase a dream.

He knows there are skeptics, but he's been faced with those before.

"As an athlete, you always try to use negativity from outside sources as fuel, but at the same time I try to not even listen to it," Tebow said Sunday as he prepared for the opener against the Augusta GreenJackets. "I love what I do, and I'm blessed to be able to play a game that I started playing when I was 4 years old."

The circus is in town

During the first part of Tuesday's media day, Tebow stayed back in the clubhouse as teammates met with reporters. It was a move, in part, to let others get the attention he's been grabbing and, in part, to keep his focus on baseball, not the circus he knew was coming.

In August, Tebow announced he had been training for a sport he hadn't played full time since 2005. That process became more real when the quarterback who won two national championships at Florida (2006, 2008) and the Heisman Trophy in 2007 signed a minor league deal with theNew York Metsin September, eight days after his workout. The Mets sent Tebow to the Arizona Fall League, then invited him to spring training.

That ultimately led Tebow to Columbia, where most people know him as the quarterback who went 4-0 against their beloved Gamecocks. And it brought the media circus. It's nothing like the one that surrounded Jordan in the mid-'90s, but Tebow has created quite a buzz for the Fireflies, now in their second season in Columbia.

"The Tebow name carries a lot of weight," said Kevin Fitzgerald, the team's director of media relations. "I'm excited for him to get out there so we can move past the introduction of him being here and that celebrity aspect of it, and then it gets just to baseball."

And baseball, Tebow says, is what it's all about right now.

"As an athlete you have to live with tunnel vision," he said. "You can't step back and look at the big picture and all these hypotheticals that people want to write about. They'll look at Thursday night, and they'll sensationalize it, and regardless of what happens, it'll be the best night of all time or the worst night of all time. But for me, it's just going to be one day."

The more than 4,000 fans who showed for Sunday's autograph session were filtering out of the stadium when Tebow noticed a familiar face among the crowd.

It was a girl he met years ago at one of his foundation events. She had driven more than seven and a half hours just to give Tebow a 5-by-7 inch photo she'd taken with him. She didn't leave disappointed.

"She just hands him the picture and gives him a hug," said Fireflies president John Katz. "When you've got someone like that who can impact people's lives to the point they're willing to get in the car seven and a half hours with no agenda other than handing him a picture, that's special. This is a guy you hope your kids aspire to be."

There was no official count on how many fans came just to see Tebow. Let's say a lot.

Many were dressed in Florida T-shirts and jerseys. Some wore Tebow's jersey from his brief NFL career with the Denver Broncos, where in 2011 he threw for 316 yards and two touchdowns in a playoff win against Pittsburgh.

"What was really cool was when they realized he was in the batting cage," Fitzgerald said. "You should have heard the cheers."

Tebow acknowledged the attention, occasionally waving or tipping his cap. He understands, as he has throughout his career, that what he does isn't all about competing. He wants to touch lives. That's why he sought out the girl with the photo.

"It's special because it transcends the game of baseball," Tebow said. "That's something I've always tried to do is bring something that means more than just playing football or baseball."

South Carolina's Williams-Brice Stadium, where more than 80,000 fans gather on football Saturdaysif the team is doing well, sits four miles from Spirit Communications Field. It was there, on Nov. 10, 2007, that Tebow, a college sophomore, launched his Heisman Trophy campaign. He rushed for 120 yards and five touchdowns and threw for 304 yards and two more scores.

"I remember having a lot of fun," Tebow said with a smile. "I love that stadium, actually. I think it's one of the more fun, underrated stadiums out there. That place gets rowdy, especially that right end zone."

So is Fireflies rookie outfielder Gene Cone, who grew up in Columbia and played baseball for the Gamecocks.

"He's a tough guy not to like," Cone said. "I don't see any problem with the Gamecocks liking him."

Fireflies manager Jose Leger didn't know much, if anything, about Tebow before he learned the football icon was on his roster the last week of spring training. So he turned to Google.

"Being from the Dominican Republic, I'm not a big football fan," Leger said.

But he's now a big Tebow fan. He marveled Sunday as Tebow addressed the media with an ease and sense of command. He believes Tebow will help his younger players with the pressure of handling expectations -- and disappointments.

There's not much Tebow hasn't experienced in sports. He even wrote a book, "Shaken," in which he shared his faith and journey, his successes and disappointments.

"Obviously, I'm new to baseball, but I've been competing for a long time, and I've been in a lot of big situations," Tebow said. "To be able to help younger guys when they think going 0-for-4 is the end of the world or 3-for-3 is best day ever, you can share those experiences and encourage them and build them up and inspire them the best you can."

Tebow's baseball journey has been one of struggles. He batted .148 with eight strikeouts in 27 at-bats during spring training. He was the only player in the Mets organization to play in at least eight spring training games without scoring a run.

But that was mostly against players with experience at levels above Class A. Leger has seen a player with good pop in the bat and solid skills in the field.

Katz, the director of media relations for the Carolina Mudcats during Jordan's baseball experience, said Tebow is at a level more "appropriate for his skills" than Jordan was when assigned to the Double-A Birmingham Barons.

Tebow will play a lot with only four outfielders on the roster. He'll start in left field Thursday night.

"Giving him that chance to be successful and putting him at this level is really the right place to be," Katz said.

And while the media focus has been on Tebow, Leger isn't worried.

"A lot of questions, yes," he said. "But a distraction? Not at all. ... We're pushing for him to get to the next level, and hopefully getting him to pursue his dream of getting to the big leagues."

Matt Strader, who manages the Fireflies' team store, can't talk specific numbers as it pertains to the sale of Tebow merchandise.

"Let's just say it's been incredible," he said. "We've definitely had to reorder some things to keep up with stock. Online we ran out the first seven hours or so." The scene on opening night is expected to be incredible, as well. The more than 7,000 seats and standing room area are expected to be packed. A team conference room has been turned into an auxiliary media room.

"We've been working hard and late hours, but nobody is complaining about it," Fitzgerald said.

Tebow doesn't know exactly what to expect. He's still getting used to the subtle differences between baseball and football, beginning with being prepared on every play even though you may go several innings without having a ball hit toward you. In football, Tebow was always at the center of the action.

He also knows that while waiting for his moment, there may be boobirds in the crowd. No worries there.

"When you go to Death Valley to play LSU, you pretty much hear everything, so ... ''

Katz has read Tebow's book. He's heard Tebow talk about turning down opportunities to play for other NFL teams at a different position because he wanted to be a quarterback. He's confident Tebow can handle his new adventure.

"He could have gone after the money, changed positions," Katz said. "That's not what he wanted. Now he wants to be a major league baseball player, and honestly, I don't know if anyone is going to stand in the way of him." 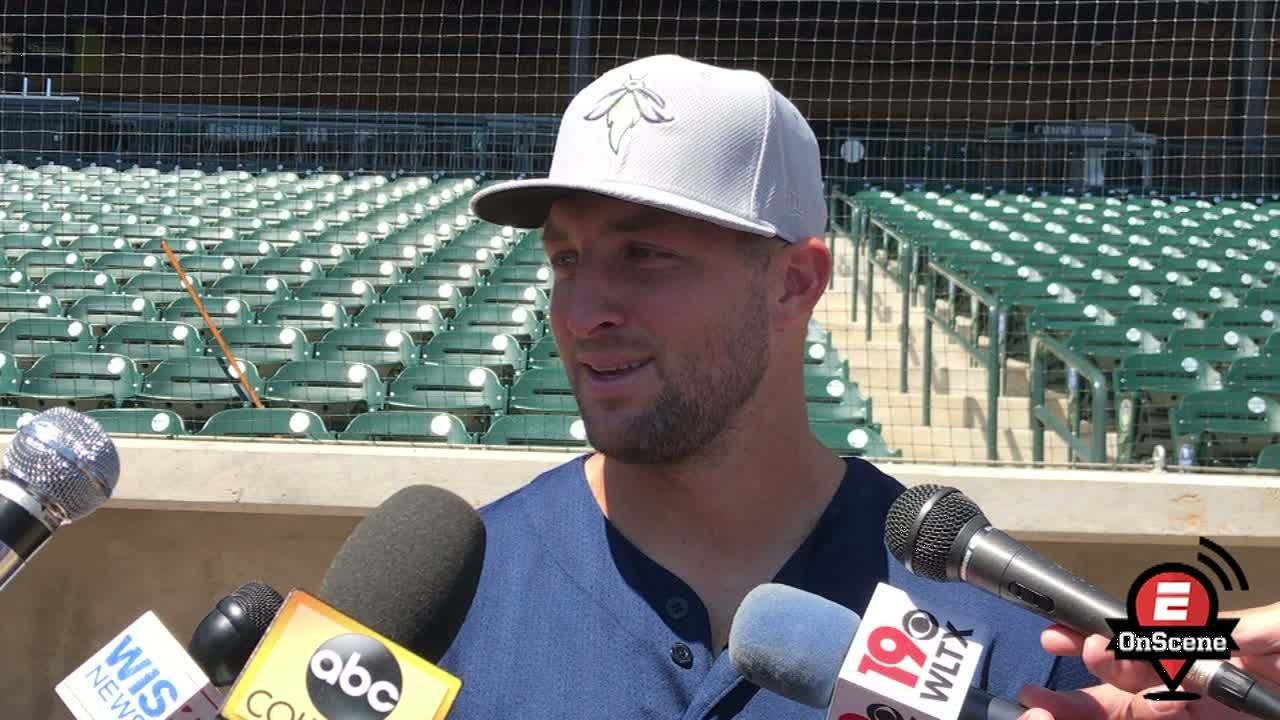