The end of Eli in N.Y.: Time for Giants to move on from Manning 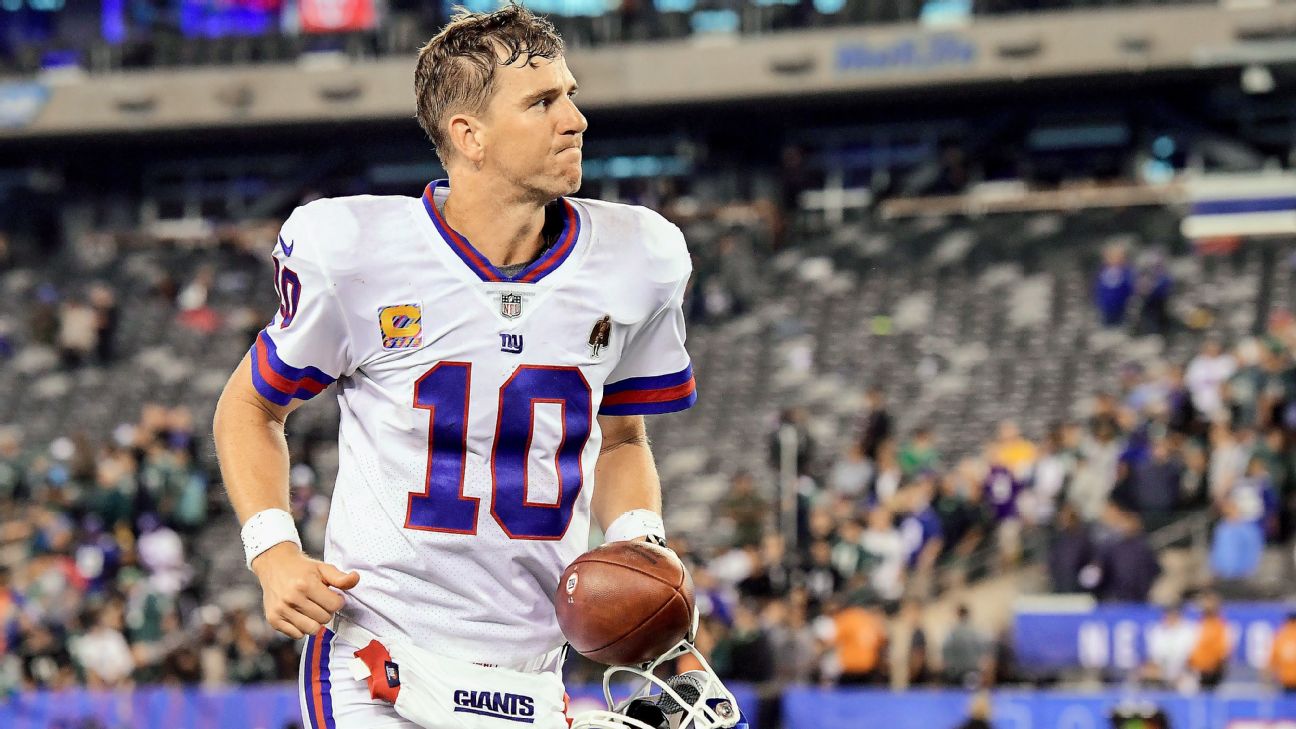 EAST RUTHERFORD, N.J. -- Four more years, Eli Manning predicted in the summer of 2017. He said he still loved the training, the film work, everything about being a starting NFL quarterback, and he figured he could compete at a high level until age 40.

"So I don't see it slowing down," he told ESPN.com at the time.

Yet now, at 37, it is slowing down to a grinding halt. Manning has devolved into a shadow of his two-time Super Bowl MVP self, and it was clear Thursday night to every fair-minded fan in the house that his time as the New York Giants' franchise player is coming to an end.

Actually, that time already has expired. In professional sports there is no such thing as a franchise player for a 1-5 franchise, or for a team that has lost 18 of 22 games over the past two seasons. As much as it hurts to say it about an athlete who has always carried himself with grace in the world's noisiest market, Manning's exit is no longer a question of when, but how.

Eli will play out the rest of the year, and in the spring the Giants will pick his replacement at the top of the NFL draft. Start tracking top quarterback prospects such as Missouri's Drew Lock and Oregon's Justin Herbert and NC State's Ryan Finley, Giants fans, because Manning won't be earning $23 million under center in 2019, the final season on his deal. His employers will try to put the best possible face on the divorce after the mess they made of the marriage in 2017. Most likely, they will try to persuade Manning to retire as a Giant, to go out with his dignity and his body intact, while eating the $6.2 million in dead-cap cash they'll take by releasing him.

The son of Archie and kid brother of Peyton has never wanted any other job but the one he has. It's why he cried last season when Ben McAdoo and the Giants' hierarchy took it away, botching an attempt to keep alive his consecutive starts streak while giving some of his playing time to Geno Smith and Davis Webb. Eli ended up on the bench for a singular Sunday that sealed the terminations of McAdoo and general manager Jerry Reese.

But Manning has to be replaced after this season, just like Tom Coughlin had to be replaced after the 2015 season. Eli is 43-58 in the regular season and 0-1 in the playoffs since winning his second Super Bowl title with Coughlin in the 2011 season, and despite the talent deficiencies around him over the years, especially on the offensive line, he has become a conspicuous part of a problem that has no easy solution.

"My confidence in myself is good," Manning maintained after his Giants were embarrassed at home by the defending champion Philadelphia Eagles. "I know I can play. It's just a matter of we've just got to figure out how to be more consistent and be better at home."

The Giants fielded one spectacular player in this 34-13 defeat -- Saquon Barkley, the No. 2 overall pick in the 2018 draft. Barkley made like Red Grange out there, running the ball 13 times for 130 yards, catching it nine times for 99 yards, and zigging every time the Eagles zagged as he made Manning's numbers look better than they truly were. Eli threw an interception on his second pass of the night, and he didn't manage a single touchdown pass while his whirling dervish of a counterpart, Carson Wentz, threw three.

So the Giants have ended up 1-5 for a second straight season, and breathed new life into the argument that they erred terribly in the draft by passing on Sam Darnold in favor of Barkley, a near-perfect prospect who happens to play the wrong position. All that was missing Thursday night was Manning striking the haunting pose of an aging, balding Y.A. Tittle on his knees, separated from his helmet as blood trickled down his face.

At the end of the first quarter, Eli had a passer rating of 7.8 while Wentz checked in with a rating at 128.8. At one point in the second quarter, Manning was 0-for-7 with an interception on any attempt deeper than two air yards.

"Throw the ball," the exasperated Giants coach, Pat Shurmur, was caught by a Fox camera barking after Manning threw painfully short on a second-and-20. "I'm sure the cameras could've caught me upset a bunch of times," Shurmur conceded later.

At halftime, Manning had converted none of his eight dropbacks in third-down situations. The same fans who rallied around him last season and had cheered him in MetLife and in the old Giants Stadium booed him after he delivered a few of his many wayward passes, a number of which should've been picked off.

"That's something I don't get caught up in," Manning said when asked about the boos. "Hey, we've got to play better football, I understand that. And we've got to find ways to be in better situations and move the ball and be a more explosive offense and a better team."

Manning was under duress for much of this rainy, foggy night, and didn't respond to the heat. He was sacked four times, and when pressured he went 2-for-14 for 16 yards. This was not your older brother's Eli, the opportunistic quarterback who could defy his lack of athleticism with great escapes and memorable heaves. Frankly, Manning spent most of the game doing a spot-on impression of a shot player.

"I'm not concerned about Eli," Shurmur said without any apparent conviction. The coach seemed more concerned about Odell Beckham Jr., who reportedly was fined for questioning the team's heart in an interview with ESPN's Josina Anderson. Of course, Beckham and his friend Lil Wayne questioned more than the Giants' desire. They questioned an old Eli's ability to be the Eli of old.

Beckham left the field with two seconds remaining in the first half and with his teammates preparing to run a final play (he needed another IV, according to Shurmur), and he was seen head-butting a sideline cooling fan on his way to finishing off a lousy six-catch, 44-yard performance.

Still, this night was about Manning's flaws, not Beckham's. Manning hasn't aged like Tom Brady and Drew Brees have aged, and there is certainly no crime in that. He will still go down as co-owner John Mara described him after the second Super Bowl title -- as perhaps the best offensive player the Giants have ever dressed.

But it is indeed time for Eli Manning to go down, no matter how much it really stinks to have to say that out loud. 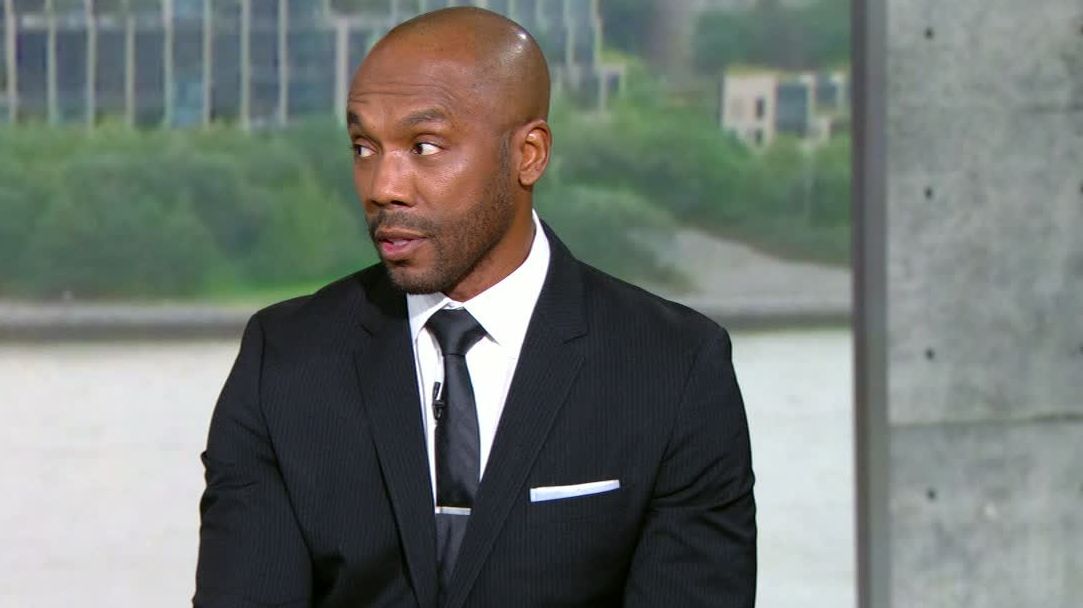 Riddick: No young QB could succeed behind Giants line
Louis Riddick notes that Eli Manning has been bad and looks disinterested, but doesn't want to criticize the Saquon Barkley pick in hindsight. 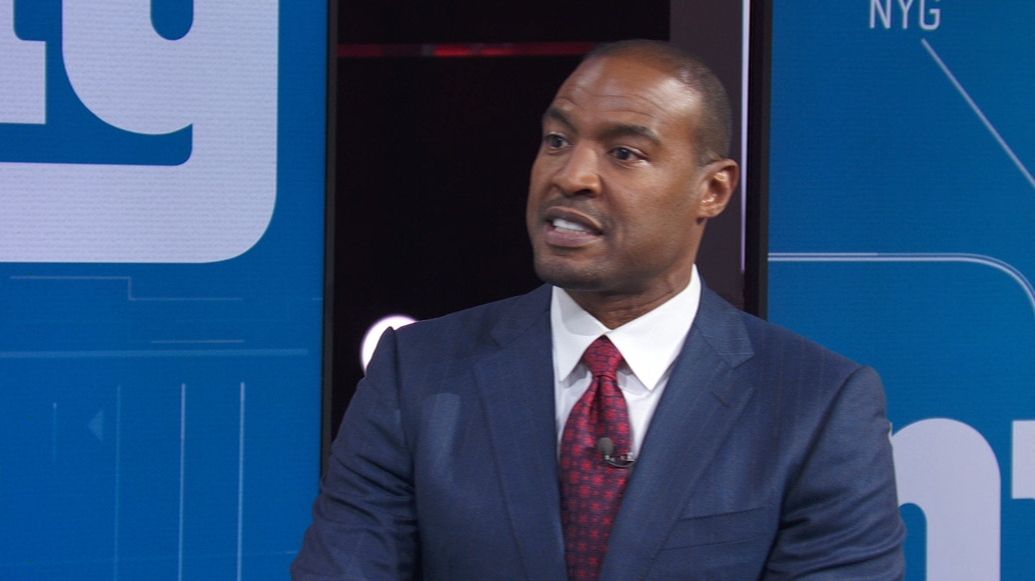 Woodson says OBJ's antics do nothing positive for Giants
Darren Woodson reacts to Odell Beckham Jr.'s antics on Thursday night and says he should focus on motivating his teammates.