The Machine and his boat oar: How DJ LeMahieu became a household (nick)name in the Bronx 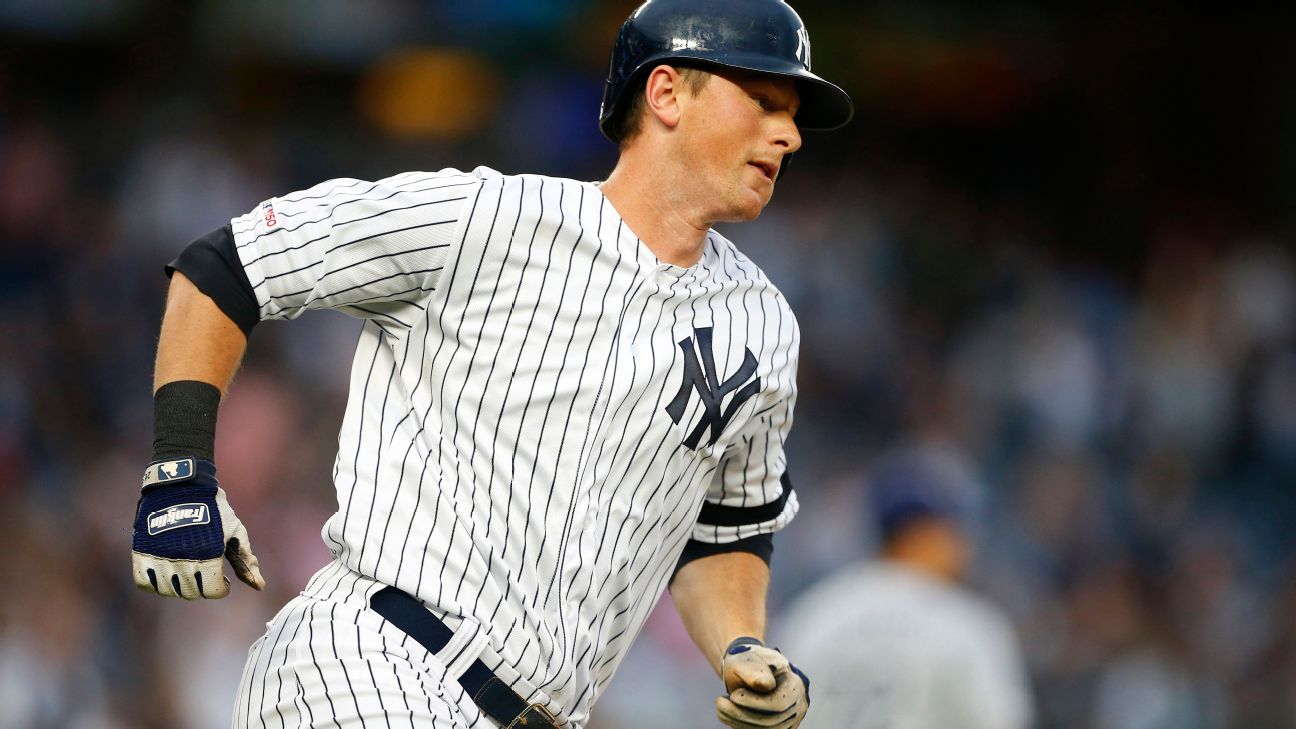 NEW YORK -- On the back of his custom Players Weekend jersey last summer, the then-Colorado Rockiessecond baseman settled on a simple two-letter nickname he has had for much of his life: "DJ."

Given David John LeMahieu's reticent nature, preferring to fly under the radar, he'll probably just pick it again next month.

But it's not like he doesn't have more creative options to ponder these days.

All season, his first with the New York Yankees, do-it-all infielder DJ LeMahieu has been Mr. Consistent at the plate and LeReliable in the field. He has been a steady, calming force in a lineup that has otherwise endured its share of change amid injury attrition. To his teammates, he has been "The Machine" in clutch at-bats, regularly swinging his "Boat Oar" and routinely delivering run-producing hits with runners in scoring position.

Without LeMahieu -- or whatever they want to call him -- the Yankees would not be where they are: far out in front of their division and holding the best record in baseball.

"He's been one of the MVPs of the league so far," Yankees manager Aaron Boone said. "He's obviously lived up to every expectation that we could have hoped for."

Could his right-handed stroke, one that earned him a batting title in notoriously artificially humidified and high-altitude Colorado, translate to near sea level in the Bronx? Putting aside his widely known defensive prowess, could his bat make him a steady contributor in a lineup that, entering the season, already had everyday second basemen, third basemen and first basemen?

Ahead of his first series against his old club this weekend, LeMahieu admitted his arrival was a little tough in the beginning. But that didn't last very long.

"I had been in a routine for seven years out in Colorado, so spring training was a bit of an adjustment," LeMahieu said. "But once baseball starts, baseball's baseball."

Whatever early concerns Yankees fans might have had about him -- including underestimating him -- the productive LeMahieu quickly assuaged them. His first half culminated in his third trip to the All-Star Game, and this week he was handed the Yankees' Heart and Hustle Award.

Last September, former ESPN baseball writer Jerry Crasnick spoke to Rockies third baseman Nolan Arenado about LeMahieu. As Colorado was making a late-season playoff push amid LeMahieu's looming free agency, the impact the infielder had long had in that clubhouse was tangible.

"If fans knew how much we appreciate DJ and saw how much we care for him and how important he is to this team, they'd realize what a big factor he is," Arenado said. "He brings a calmness to our team. But when he gets fired up, you know it's something serious. It's something he really feels in his heart, and we feed off that.

"He sets the standard for us. We go where he goes, really."

Those words could very well apply now to the 2019 Yankees.

Entering Friday's series opener against Colorado, LeMahieu leads the American League with a .329 batting average. His 119 hits are just nine shy of the major league lead, and his 65 RBIs are just one shy of his previous career high.

One of the three most-used Yankees this season, LeMahieu has proved durable and dependable. But as his teammates are quick to say, none of that should come as a surprise to Yankees fans.

"I enjoyed watching him play for years when I was in the NL West, and it's the same thing," said Yankees outfielder Cameron Maybin, who played in San Diego near the start of LeMahieu's tenure in Colorado. "It's just now he's getting to do it on the biggest stage there is, and I'm happy people can really see just how special and how good he is as he just saunters around as chill and cool as can be. It's fun to just watch him do his thing. It really is."

Cora saw the latter firsthand last month inside London Stadium, where the Yankees and Red Sox met in a two-game series.

During the high-scoring showcase, LeMahieu went 7-for-12 (.583) with three doubles, seven RBIs and four runs scored.

One of the doubles hugged the left-field line as it cleared the bases. On that particular extra-base hit, left fielder Andrew Benintendi had to travel from near the left-center field gap just to pick up the ball in the corner.

Credit, in part, such shift-beating savvy to helping give rise to LeMahieu's most recognized Yankees nickname.

"When I noticed he was getting three or four hits every day like nothing, he kind of looked like a machine," Yankees catcher and nickname creator Gary Sanchez said through a translator. "They would move the shift one way, he would hit it the other way. They would move the shift the other way, and he would hit it another way. That's how [The Machine] came about."

Sanchez, in fact, no longer refers to LeMahieu as anything other than "Machine."

"He calls me that like 20 times a day," LeMahieu said.

Other Yankees have followed suit, endearingly referencing their teammate by the Terminator-like description, which has made its way to the ballpark video board and the team's social media channels.

Even LeMahieu's equipment is earning nicknames. Some around the team have started calling the dark-stained Marucci Sports bat LeMahieu swings a "boat oar."

"He gets that boat oar going in the zone for a long time," Boone said.

LeMahieu touches so much of the strike zone with his bat when he swings it's as if he's swinging a massive paddle.

Coors Field aside, much of what has made LeMahieu so valued as a hitter in recent seasons -- he has averaged .313 batting and an .814 OPS since 2015 -- has been his swing. It's one LeMahieu contends he has tweaked often over the years, but foundationally, it's the same as what he had even back in high school in Michigan and in college at LSU.

"He keeps his bat in the hitting zone for such a long time," Boone said. "And he does such a good job staying on his back side. So he allows the ball to get deep on him, and still gives himself plenty of room to get the barrel of the bat there.

"And it's led to, obviously, consistent, hard contact. Even when he's not getting hits, it seems like he's hitting a line drive somewhere, or hitting the ball hard somewhere."

On certain metrics, LeMahieu is actually performing even better now than he did in Colorado.

According to Statcast, LeMahieu has had the highest percentage of barreled balls of his career this season. His average 91.4 mph exit velocity also is the highest it has been since Statcast began tracking in 2015.

"He laughs when I mention this because he's so humble, but I'm like, 'When I'm going good, I just sit in bed and I just watch DJ highlights,'" Maybin said. "He just cracks up."

Similar in stature to the 6-foot-4 LeMahieu, Maybin watches a lot of clips of the infielder and other taller hitters to try to incorporate their strengths into his own swing. Even before they became teammates and close friends, Maybin always kept an eye on The Machine.

"I love watching him hit balls inside to right field, and just kind of opening up and getting his hip through and his barrel through. It's really fun, man."

LeMahieu has MLB's second-highest batting average with runners in scoring position (.439), trailing onlyMiguel Cabrera(.444). Arenado and another of LeMahieu's former Rockies teammates, Charlie Blackmon, rank just behind them in third and fifth place.

"I never really thought about [hitting with runners in scoring position] until I got to college and pro ball," LeMahieu said. "I just hit. I just liked to hit. When you get to this level, you realize that with the pitching nowadays, runs are so important, and it's just that for me, I'm always trying to get on base. But when there are guys in scoring position or guys on base, it's kind of my chance to make a mark on the game."

LeMahieu credits the Yankees hitting around him.

"It just seems like I've had a lot of guys on base in front of me," LeMahieu said. "I just feel like it's a really good lineup, and I don't feel like the game is resting on my shoulders in that situation.

"Watching these guys day in and day out, and watching their compete level no matter the situation, I feel if I don't get the job done, the next guy will. If I can just get on base and have good at-bats, I feel like that sets up the inning well."

A consistent swing, trust in his teammates and a boat oar of a bat have this machine running smoothly in the Bronx.
Report a correction or typo
Related topics:
sportsespnnew york yankeescameron maybindj lemahieugary sanchez
Copyright © 2021 ESPN Internet Ventures. All rights reserved.
More Videos
From CNN Newsource affiliates
TOP STORIES