The NHL's best and worst this week: When will Kirill Kaprizov, Ilya Sorokin come to the NHL? 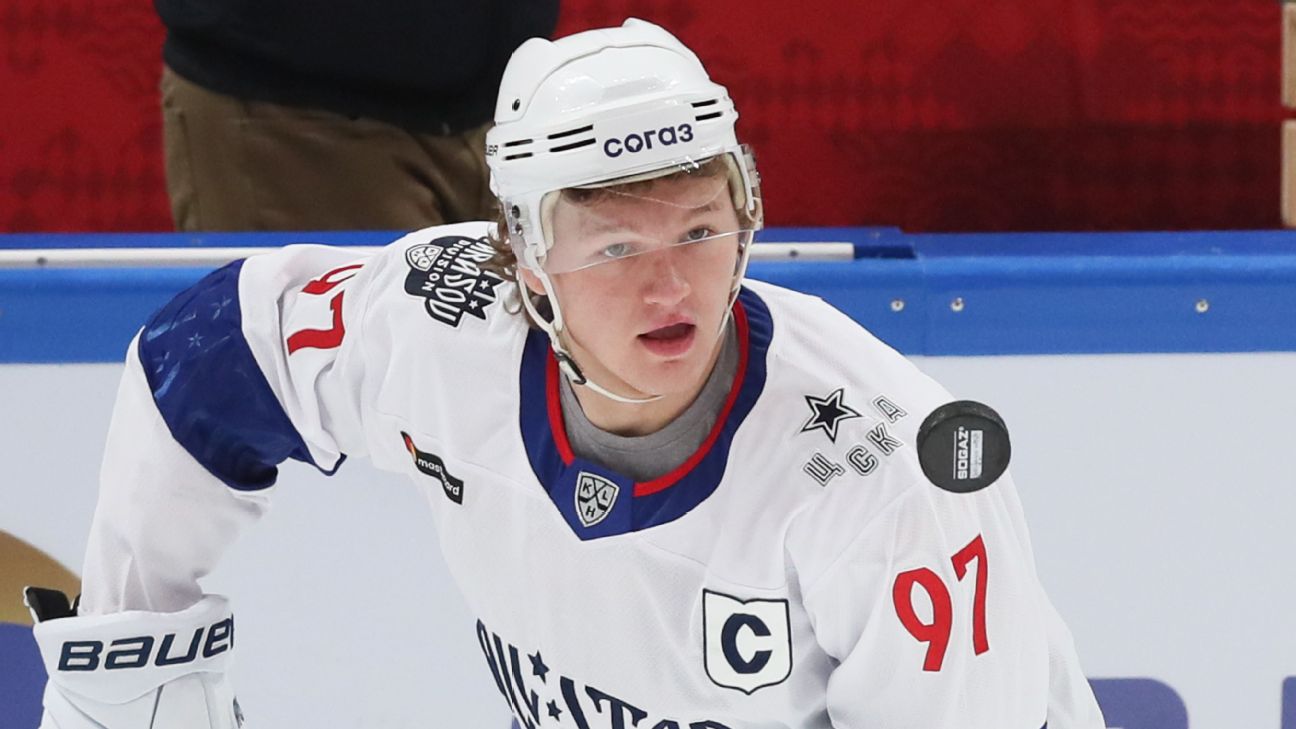 MOSCOW -- Last season, CSKA Moscow became the first team in KHL history to finish first in the regular-season standings and then go on to win the Gagarin Cup. Now they have a chance to do it twice in a row. At 32-10-3, Red Army has the league's best record and an astounding plus-76 goal differential. A big reason why? Two names that are familiar to North American hockey fans: goaltender Ilya Sorokin (.934 save percentage, 1.54 goals-against average, six shutouts) and winger Kirill Kaprizov (23 goals and 47 points through 46 games).

Sorokin, the reigning Gagarin Cup MVP, was a third-round pick of the New York Islanders in 2014, and has long been viewed as their goaltender of the future. Kaprizov, a fifth-round pick of the Minnesota Wild in 2015, scored the game-winning goal in the Olympic gold-medal game in 2018, which made him a national hero.

Scouts have buzzed about Kaprizov as he has developed in the KHL and on international stages; if what his peers in the KHL think is any indication, he'll quickly be a star in North America. Said former NHL winger (and KHL All-Star) Nigel Dawes: "I think everyone sees it. It's kind of a no-brainer. ... He'll have a lot of success in the NHL."

Both Kaprizov, 22, and Sorokin, 24, are under KHL contract through this season. What comes next is a little murkier.

There's a widespread belief in Russia that this is Kaprizov's last season in the league. "Kaprizov will probably go over," former KHL president Dmitry Chernyshenko said earlier this month, before stepping down last week when he was appointed by Vladimir Putin as a new deputy prime minister. Many people in Russia I talked to compared Kaprizov's situation to that of Washington Capitals center Evgeny Kuznetsov, who spent three seasons in the KHL after getting drafted, because he wanted to develop as a player and make sure he was ready for the transition to North America.

Kaprizov, however, isn't ready to make any declarations just yet.

"I'm concentrating on the final year on my contract, and that's what's in my head now," Kaprizov said through an interpreter. "Of course, I do have a wish to go over to the NHL and test myself there, but I don't want to make any hasty statements at this point because this season is a priority. So we'll see."

Sorokin was similarly cagey. When asked if he knows what he wants to do next year, Sorokin said (also via a translator): "I will know after the last day of the [KHL] season."

Sorokin said he met countryman and current Islanders goaltender Semyon Varlamov three years ago and called him "a great guy and great sportsman." When asked whether Varlamov's presence would impact his decision, Sorokin laughed and said, "I'd be fired tomorrow if I answered that."

And so we'll have to wait. Sorokin said he has not had much contact with the Islanders. New Wild general manager Bill Guerin, meanwhile, traveled to Moscow in December and met with Kaprizov; signing Kaprizov next season would be considered a huge coup for the rookie GM, as his team needs an infusion of youth.

Both Sorokin and Kaprizov speak conversational English but didn't feel comfortable enough doing an interview in their non-native language. "As far as what I'm worried about if I go over, nothing really comes to mind. I'm pretty chill about it," Kaprizov said. "I've never been to the States. I think language might be a bit of an issue at first, but we'll see once I'm there."

What we liked this week | What we didn't like

Three stars of the week | Biggest games coming up

This is the last season the KHL will have a flexible salary cap. Next year will have a hard cap -- roughly $14 million -- and a hard floor of roughly $4 million, which will be raised to roughly $6.5 million over the next few seasons.

An NHL and KHL crossover event -- whether it be an exhibition or a combined all-star game -- could be captivating. But don't expect it to happen anytime soon. As mentioned earlier, Chernyshenko recently took a new job in the government. But when we spoke in Moscow, he discussed the appetite from both sides. "Everyone dreams to have it, like the old [summit] series," Chernyshenko said. "But this is a matter of the calendars and the schedules. What's convenient for us is not convenient for them." Chernyshenko sat down with NBC recently and said they "tried to invent how it could be possible, and how to create it, but we couldn't find any dates."

Chernyshenko, who served as president of the Sochi 2014 Olympic Organizing Committee, also commented on NHL players' participation in the Olympic Games. "Maybe the NHL business is so strong that they don't need the additional boost of the participation of the NHL players," he said. "They think that the NHL finals and playoffs are more important than the Olympic Games. I don't know. If they are not going to go to the Olympic Games, that's fine for them. It's more advantageous for Russia. But for the spectators, it's a shame. The spectators really deserve to have the best players there."

NHL commissioner Gary Bettman reiterated the NHL's stance at NHL All-Star Weekend: "We believe -- and our experience both with going to five Olympics and then not going to Pyeongchang tells us -- that going is extraordinarily disruptive to the season. ... I know it maintains itself as a priority for the players' association, but having said that, we were very comfortable with not going to Korea."

NHL officials have been using the words "international flavor" as they rethink the format for the 2021 All-Star Game, which will be held in Florida. The NHL and NHLPA are hashing out details now and throwing some ideas on the board, but it sounds like teams could be determined by players' nationalities. That likely would alter the selection process for All-Stars.

The excitement of 3-on-3 hockey has led many fans to wonder whether the NHL would ever extend the five-minute overtime period, and potentially get rid of the shootout altogether. Some players, though, aren't necessarily champing at the bit for that change. Consider Capitals defenseman John Carlson, who said playing 3-on-3 is "one of my favorite things." But he added: "The one thing I would say definitely against it -- because I definitely enjoy it -- is it takes a toll on the guys that would play it. And after a long game, to potentially be stuck out there for two-, three-minute shifts, that it doesn't seem conducive to players' health. The season is long and hard. The game is just getting faster and more physical and at some point you have to say no. ... That's a lot to ask from top players."

What we liked this week

Pastrnak was so good on Saturday -- four goals and two assists in two games -- he won All-Star MVP (and a Honda CR-V hybrid) in a losing effort for the Atlantic Division.

The goalie stopped 17 of 18 shots -- including a glove save at the buzzer -- to cement a 2-1 win for Canada in the inaugural 3-on-3 women's game at NHL All-Star Weekend. She was sensational.

Taking down a three-year defending champ is no easy task, especially if it's Connor McDavid. But Barzal dethroned McDavid in the fastest skater event with a blazing time of 13.175 seconds.

Games of the week

The Battle of Alberta got spicy ahead of the All-Star break, including a war of words between players and troll-job billboards fund-raised by the fan bases. Things cooled down when Matthew Tkachuk, Leon Draisaitl, Connor McDavid, Mark Giordano and David Rittich all teamed up for the All-Star Game, and spouted nothing but ... compliments. But we have a feeling this battle isn't totally over yet.

This should be a good one. The Pens, of course, have welcomed Sidney Crosby back, and he has eight points in five games. The Flyers blanked Pittsburgh right before the break and have posted impressive wins lately against three of the other best teams in the league (besides the Penguins): Washington, St. Louis and Boston.

These teams have been frequent trading partners over the last few years, leading to plenty of familiar faces for both sides. The Blackhawks cruised into the break red-hot, winning five of six, and are now only three points out of the second wild-card spot. The Coyotes, currently holding the first wild card, are well within striking distance of first place in the wild Pacific Division.

Quote of the week