The rebuilding Knicks and their bargain bin of former lottery picks 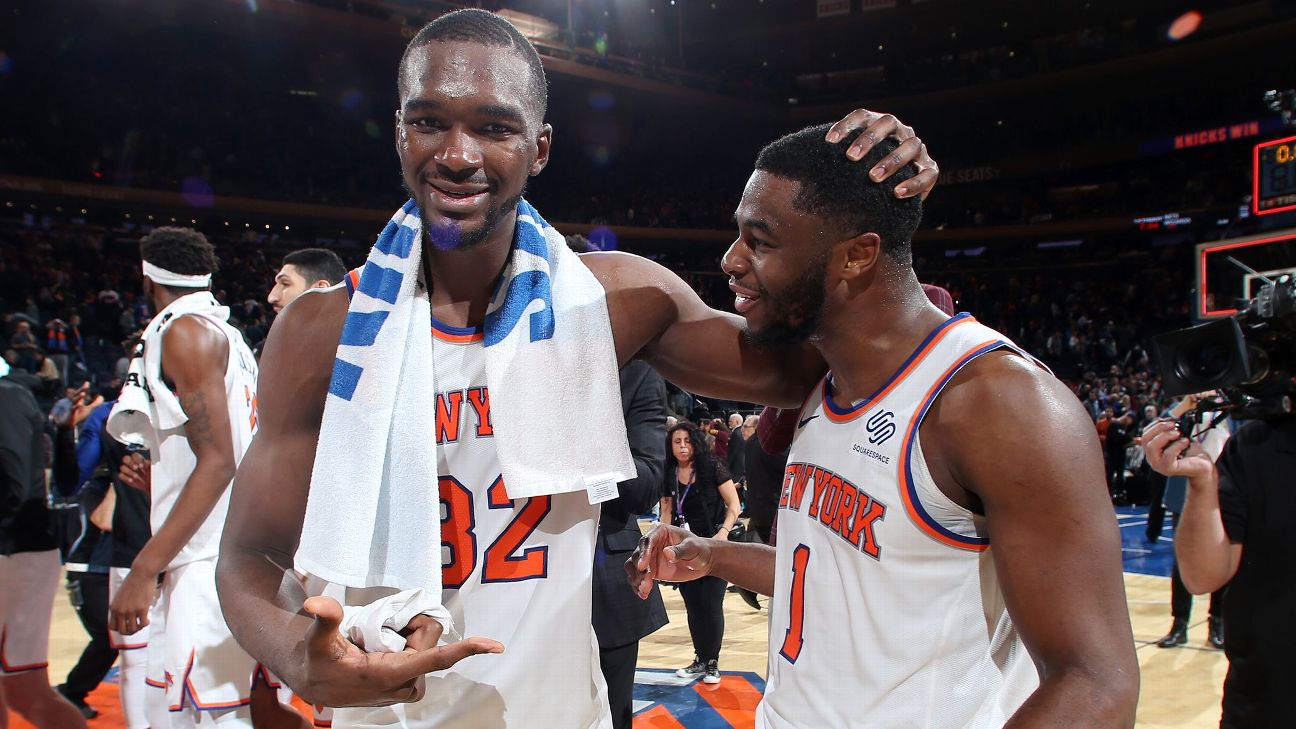 ESPN
By Ian Begley
A FEW MINUTES into David Fizdale's introductory news conference in May, his eyes veered offstage. Eventually he looked to his right, locked eyes with Emmanuel Mudiay, seated a few feet away, and smiled.

The fourth-year guard, acquired by New York from the Denver Nuggets last February, is hoping the change of scenery is all that's needed to jump-start his career after failing to live up to the potential as a lottery pick. He's not alone.

"Some of these guys that we brought in as quote-unquote reclamation projects," team president Steve Mills said, "[we hope] that there's enough advancement in their development that we have some tough decisions to make."

For the past two seasons, the cap-crunched Knicks have been in a process general manager Scott Perry calls "talent-acquisition mode": the chance to take risks on talented former lottery picks discarded by previous teams. For the players, it's an opportunity to show the Knicks -- or 29 other NBA teams -- that they belong in the league. For New York, it's a bunch of low-risk fliers packed with potential to become part of the grand plan ahead of a star-studded free-agent class of 2019.

"The talent is there for most of these guys. You don't get drafted that high if it isn't," Fizdale said. "It's just, can we figure out as coaches how to get to them?

IT'S TIME FOR Noah Vonleh to fill up.

Days after he signed with the Knicks, Vonleh is starting to settle into a daily offseason routine, one that starts with an early trip to a grocery store near his midtown Manhattan apartment. Alongside him is an empty water jug nearly the size of an office cooler that he'll fill with alkaline water.

"They let you fill it up for like 10, 15 cents," Vonleh said of the frugal morning ritual that amused his teammates during offseason workouts.

"They were clowning me, like, 'What are you carrying that big jug around for? What you need all that water for?'" Vonleh says with a grin.

"And then they would see how much I was sweating."

Vonleh would go through two or three T-shirts during workouts, all while drinking a gallon or more of water. From there, he'd go to the National Basketball Players Association gym in midtown for individual workouts. And more high-quality H2O.

"He was walking around midtown," Tim Burns, Vonleh's trainer said, "swinging the thing over his shoulder like it was nothing."

Thanks in part to a dedication to hydration and a commitment to those offseason workouts, Vonleh came into his Knicks debut in the best shape of his career. And the results have been eye-opening for the fifth-year power forward.

Vonleh enters Friday's game against the Indiana Pacers averaging career highs -- or near career highs -- in points (8.6), rebounds (8.8), assists (2.1) and effective field goal percentage (52.6). If you ask Vonleh why he's thriving in New York in ways he hadn't in three previous stops, the answer is simple.

"They're just letting me play. Play through my mistakes, play free. Use my versatility as a strength. That's basically what it was," said Vonleh, who was traded by the Charlotte Hornets to the Portland Trail Blazers in his second season and dealt to the Chicago Bulls last year.

"Other teams, they had other guys they felt were a better fit for certain roles," he said. "So I had to play a different role wherever I was at. Or there wasn't much opportunity wherever I was."

Per Second Spectrum data, Vonleh is averaging career highs -- by a wide margin -- in perimeter touches per 36 minutes (17) and dribbles per touch (1.17). That's helped him more than double his assist percentage (11.5) this season. New York's net rating is 10.1 points better with the 23-year-old on the court than when he's off.

"He does a little bit of everything for us," Fizdale said. "I would say he's probably our most complete player [this season]."

Vonleh is also stretching the floor more than ever. This season, he has taken a career-high 32.5 percent of his shots from behind the arc. He's shooting 40.7 percent on those shots, which is also a career high.

"If I can stretch the floor, there's no excuse for any coach to put me on the bench," said Vonleh, who cited Fizdale as one reason he chose to sign with the Knicks over other suitors.

The process has clearly worked for Vonleh. But his play hasn't masked the Knicks' many shortcomings. New York, losers of 15 of their past 17 games, enters play Friday with the 29th-ranked defense in the league. With actual wins scarce, Fizdale has had to find victories in smaller aspects of the game this season.

One of the ways he measures a "win"? When Mudiay buries a jumper.

SINCE FIZDALE'S DECLARATION in May, Mudiay has accepted the challenge laid out by his first-year head coach.

The 22-year-old is averaging a career-high 14.1 points and a career-low 3.4 turnover rate this season for the Knicks. On most nights, he's looked like a different player than the one acquired by New York at the 2018 trade deadline.

"I know [the trade] seemed like nothing to a lot of people, but I thought it was a good trade from afar," said Fizdale, who was working as a TV analyst for ESPN at the time. "I said, Scott Perry and those guys aren't wasting no time, because it was like the day after Kristaps got hurt ...

"I said if they could get [Mudiay] to play at a high level -- at a level everybody thought he could be at -- they might have a player."

Shooting was the point of emphasis for Fizdale and his coaches when they started working with Mudiay during the offseason. The results are encouraging, as Mudiay is shooting 41.4 percent from the field on jump shots this season, according to Second Spectrum data, which is 11th among 111 players who have attempted at least 200 jumpers. Last season, Mudiay shot just 33.9 percent on jumpers, which was tied for 181st among the 206 players who attempted 200 such shots.

"His form looks great," an Eastern Conference scout said. "And you can just see that he's shooting it with confidence."

Fizdale and his staff have given Mudiay the freedom to hunt for jumpers in the paint and seek post-up opportunities on smaller guards -- opportunities he didn't have as frequently in his final season in Denver, where he fell out of the rotation. Mudiay shot 31 percent in the area of the paint outside of the restricted area last season; this season, that number is up to 52 percent. Last season, Mudiay hit just 40 percent of his fallaway jumpers; this season, he's hitting 62 percent.

But whatever you do, don't try to tell Mudiay about his improved numbers.

"I've been hearing that, 'Oh, you're playing well.' But what happened last game [doesn't matter]. It's a whole new day today."

Mudiay said he was too concerned at times with his stats in Denver. Blocking that out has helped him focus on daily improvement, a theme hammered home by Fizdale.

"There really wasn't a lot of stuff that we had to tinker with his game. Maybe with his shot a little bit here," Fizdale said. "But it was just rebuilding his spirit. It's back."

THE CHRISTMAS DAY rematch never materialized between Mario Hezonja and the Greek Freak.

The Knicks-Bucks matinee on Dec. 25 was supposed to be the second act to a bubbling feud between Hezonja and Giannis Antetokounmpo. A little over three weeks earlier, Hezonja stole an outlet pass in the first quarter, finished with a powerful dunk and stepped over Milwaukee's superstar on his way back up the court.

The Madison Square Garden fans and social media loved it, but the viral moment has been one of few highlights of Hezonja's season.

The 23-year-old was a DNP-CD for the teams' Christmas Day matchup, and after starting for an 11-game stretch in November and December, he played a total of 8 minutes over a six-game stretch. In the Knicks' past two games, Hezonja has seen an average of 28 minutes.

"I'm supposed to want to kill [Fizdale]. Like, 'Fiz, what the f--- are you doing? I'm here for one year,'" Hezonja, who signed a one-year, $6.5 million deal with New York over the summer, said with a laugh. "But no, I come to the next practice [after a DNP], and we're hugging, we're best friends."

Fizdale helped sell Hezonja on New York in July during a free-agent meeting in Los Angeles. Disappointed by having what he calls "no role" during his three seasons with the Orlando Magic, Hezonja was intrigued by Fizdale's plans for the Knicks and by how he'd be used in the offense, and he chose New York over several playoff teams courting him.

"Let me go to the team that didn't have that much success," Hezonja said. "I'm going to build with them."

It hasn't worked out perfectly for Hezonja thus far, but he's happy for players ahead of him in the rotation and optimistic that he'll make an impact soon. "You'll see," he said.

Hezonja isn't the only former lottery pick whose been shuffled in and out of the lineup. Burke's minutes have been equally inconsistent. He was taken out of the starting lineup after five games and has been out of the rotation for stretches. "I'm going to always stay ready," Burke said last month. "That's just the nature of my situation now."

Not all of the Knicks have handled demotions as well. Kanter voiced displeasure with his decreased role earlier this month, and other veterans have privately grumbled about their minutes.

These issues certainly aren't unique to the Knicks, though. They creep in on most teams committed to developing younger players at the expense of winning games.

"We're still chasing wins, but player development is a huge part of this deal," Fizdale said.

ONE BIG QUESTION moving forward for the Knicks is, do any of these reclamation projects have a future with the team?

"Our goal is to develop these guys and make them as good as they possibly can be so that we have some hard decisions to make," Mills said late last month.

If things go well for New York this summer, the decision might not be that difficult.

Six Knicks, including Vonleh, Mudiay, Hezonja and Burke, are on expiring contracts, so New York is a money-slashing transaction away from having enough cap space to sign a 2019 max free agent. (With Porzingis' cap hold, they currently project to have roughly $30 million in room.)

The obvious names -- including Kevin Durant, Kyrie Irving and Kawhi Leonard -- are among the free agents on their list.

If they land one of those or another star in July, the Knicks would have little money to offer their own free agents. These players can return on lower-salaried contracts, but that seems unlikely for a someone like Vonleh, who has already been pegged as a free-agent target by several opposing teams, per league sources.

So, in a sense, the Knicks' former lottery picks might be auditioning for their next NBA stop. But they shouldn't cross New York off their list.

"We know that we can create the room to attract a max player," Mills said. "But we also hope that some of the guys on our roster force us to pay them." 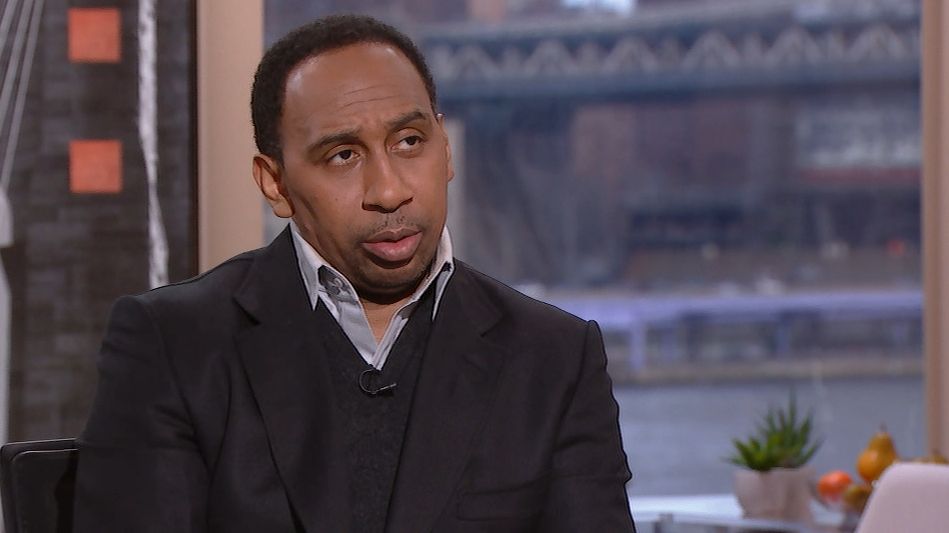 Stephen A. calls Max a 'traitor' for his Porzingis take
Max Kellerman says the Knicks should let Kristaps Porzingis go so they don't "ruin his career" and Stephen A. Smith is appalled by that statement.

Vonleh goes perfect behind the arc
Noah Vonleh knocks down a trio of corner 3-pointers in the first quarter.

Fizdale likes Knicks' trade for Mudiay
David Fizdale says the Knicks made a good move to get an athletic point guard by trading Doug McDermott for Emmanuel Mudiay.