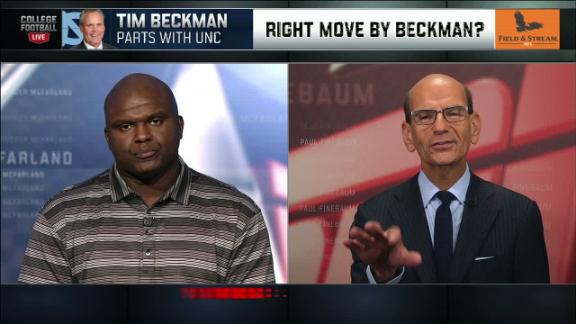 Former Illinois football coach Tim Beckman announced Thursday he will no longer serve as a volunteer assistant at North Carolina, saying he did not want to be a distraction to the program.

The announcement came one day after the school confirmed that Beckman, who was fired as Illinois' football coach last year after the school found he mistreated players, was working with Tar Heels coach Larry Fedora and the defensive staff, helping break down film and scout.

"I appreciate the opportunity Coach Fedora gave me to stay connected to the sport and be around one of the best staffs in the country," Beckman said in a prepared statement. "His willingness to help a friend was a benefit both personally and professionally. I do not wish to be a further distraction to the team or University and I will no longer serve as a volunteer at UNC. I wish Larry and the program nothing but success going forward."

Fedora took criticism for bringing on Beckman, who was fired by the Fighting Illini on Aug. 28, 2015. A school investigation concluded he influenced medical decisions and pressured players to play hurt. In April, Beckman settled a wrongful termination lawsuit against the school for $250,000.

On Wednesday, Fedora defended the decision to have Beckman work with his staff, saying, "I don't believe everything I read, all right? I know Tim. I know his side of the story also. So I was comfortable with it."

Fedora described the decision as helping a friend. He and Beckman worked together previously at Oklahoma state in 2007.

In a statement released Thursday, Fedora said that he and Beckman "agreed his presence had become too much of a distraction."

UNC chancellor Carol L. Folt said Beckman's decision to leave was "the right thing to do."