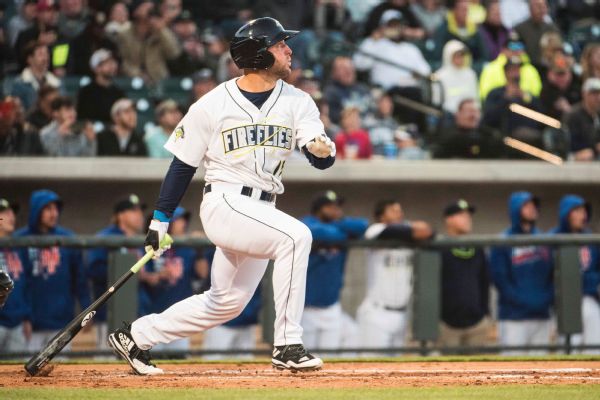 COLUMBIA, S.C. -- There are still too many strikeouts. His patience at the plate is a struggle. And the batting average remains below .250. But Tim Tebow believes he's making steady progress in his life as a pro baseball player.

"It feels more comfortable," Tebow said Tuesday night, a short time after scoring the winning run in the Columbia Fireflies' 2-1 victory over Delmarva. "I'm definitely seeing pitches better. I feel like I'm getting better every week, too."

The numbers bear that out, minus his flashy start for the New York Mets' Class A affiliate -- Tebow homered in first pro at-bat, then added a second homer three games later. An average that hovered in the mid-.100s for the first couple of weeks has popped to .231. Tebow had three multistrikeout games in his first six starts, yet just one in his past 10.

"His at-bats, you see the consistency," Fireflies manager Jose Leger said. "Once he finds the rhythm, this guy's got the right tools to play this game."

Tebow displayed patience against the Shorebirds, reaching three times despite going 0-for-2. His one-out walk in the bottom of the ninth started Columbia's winning rally, with the former Heisman Trophy-winning quarterback for Florida crossing the plate with the winning run after Gene Cone's bases-loaded walk.

Tebow awaited his charging teammates for congratulations, but they passed him right up to continue down the first-base line, where Cone had successfully stepped on the bag.

"We haven't had many walk-offs like that," Tebow said with a smile. "I'm just glad I didn't get the Gatorade."

Tebow, 29, has put in the work to improve, Leger said. He shows up at the park early for extra batting practices or shags fly balls late to better his skills in left field. He also has dealt with the throngs of fans, home and away, clamoring to say hello, take a selfie or get an autograph.

One fan Tuesday night was decked out head to legs in Florida Gators gear. Another group arrived with one person in Tebow's No. 15Broncosjersey and a second wearing Tebow'sNew York Jetsjersey.

It's not always easy, Tebow acknowledged, balancing the discipline and focus on the field necessary to get better at baseball with the demands of others off it.

"I feel I'm making progress," he said. "But it's a process. It's just continuing to have that work ethic whether you're 0-for-4 or whether you're 3-for-4. It's something I've tried to focus on this entire time. I don't want to get too good after a good game or too bad. I'm just trying to stay level-headed."

Columbia president John Katz said there's no timetable for Tebow's stay in South Carolina. "We don't control any of that," he said.

Leger would love to have Tebow around a lot longer. He has been a leader in the clubhouse, showing the younger guys that extra work is essential to succeed at this game.